Almost every publication, article, documentary or podcast on Roman Polański includes the adjective ‘controversial or ‘problematic’. It goes without saying, that this is done for all the right reasons. During the heated discussion about Polański’s personal life, his artistic achievements become a secondary matter. Overlooking his filmography would be a true loss and disrespect towards dozens of talented people that helped to shape it. Among his frequent collaborators were composers: Krzysztof Komeda and Alexandre Desplat, director of photography Paweł Edelman, screenwriter Gérard Brach as well as an actress (and wife) Emmanuelle Seigner.

The cinema of Roman Polański revolves around traumas caused by dehumanization, the invasion of safe and familiar spaces as well as deviating sexual encounters. Having witnessed and caused a lot of horrors in his own life, Polański is best known for his mastery in building tension and creating a feeling of discomfort in the viewer.

Although primarily known for thrillers and horrors, Roman Polański excelled also in comedies (The Fearless Vampire Killers) and history (The Tragedy of Macbeth) or period pieces (Tess). Moreover, in his filmography, we can find family-friendly movies (Olliver Twist) and thought-provoking short films (Mammals and Two Men and a Wardrobe).

This stylish neo-noir set in Los Angeles in the late 1930s is inhabited by some of cinema’s most untrustworthy and repelling characters. Polański’s take on the archetypes known from hardboiled fiction and crime dramas enhances their pessimism and almost Freudian tragedy. At the same time, the detective and fatal femme duet portrayed by Jack Nicholson and Faye Dunaway are undeniably fascinating to follow. Despite the horrific events and plot twists, Robert Towne’s screenplay is also full of witty lines and dark humor. With this film, Roman Polański left Hollywood with a bang.

Checkout – Masculinity And Ignorance As Themes In Neo-noirs: Taxi Driver, Chinatown, And Drive This thriller is considered to be Polański’s most Hitchcockian film. It is full of elements attributed to the master of suspense. Frantic follows an American doctor (played by Harrison Ford) whose wife went missing on their trip to Paris. He is disappointed by the attitude of the police and starts his own investigation which leads him into many life-threatening situations.

While Harrison Ford was the biggest star who attracted viewers to the cinema, it might have been Emmanuelle Seigner that made them stay until the end. Or even come back multiple times. In Frantic, she portrays Michelle – a young drug smuggler that Harrison Ford’s character meets on his mission to find his wife. Together, they make an odd couple whose tensions keep us entertained. And although it is entertaining, it lacks the essentials of a quintessential Polański’s film. 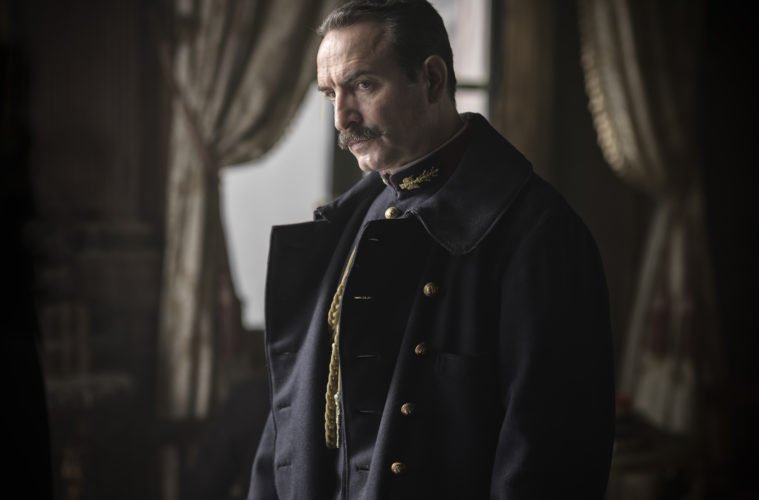 Because of Polański’s old age and expulsion from the French film academy An Officer and a Spy was rumoured to be his last film. We now know that it is not his final word yet, as the director announced that he is preparing another project. However, An Officer… would be the right piece for a swan song, since it shows both artistic integrity and a personal touch.

Polański’s take on the Dreyfus affair is gripping even for people not familiar with French history and politics. After all, it is a spy film, just only happening in the late XIX century – with all of the iconography and tricks known from espionage films.

Each of Paweł Edelman’s frames has artistic and ductile properties. The lighting and the usage of colours enhance the feeling of tactlessness and help to stimulate all of the senses. It is far from being a tableau vivant but it is hard not to notice its painting-like qualities. 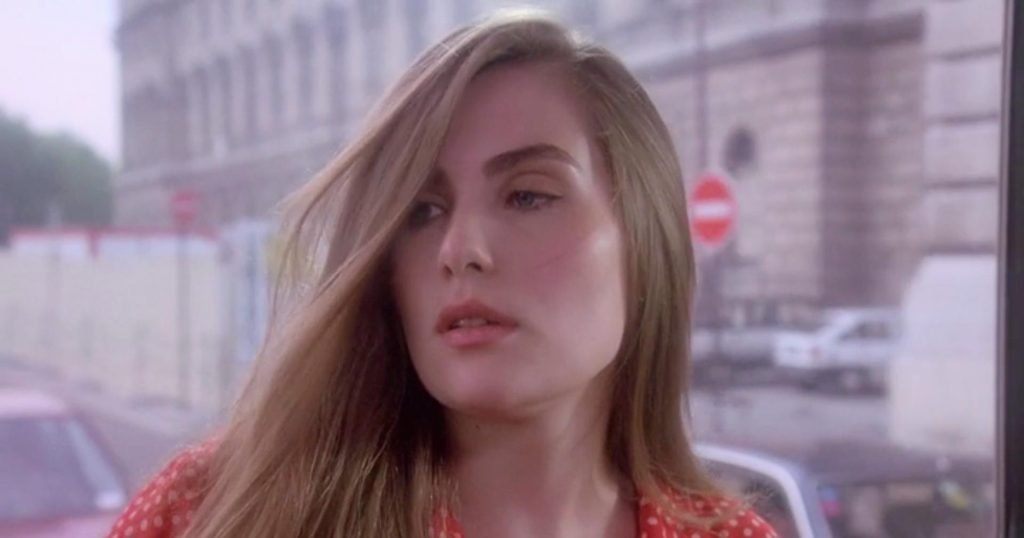 In this film, it is the subconsciousness that takes the lead and leaves any form of reason behind. It is not just the characters who become ‘Slaves to Love’ but the audience, too. Bitter Moon suggests that fulfilling our dreams and fantasies, especially those related to sexuality and relationships, do not leave us satisfied and happy but rather on the contrary – burned out and bitter.

In this political thriller about a writer hired to edit a former Prime Minister’s memoir, Polański tells a story of a passionate pursuit of truth and the drive to get it out. The main character played by Ewan McGregor, acquires dangerous information about the past of the politician and realises, that the price for such knowledge could be the highest one.

The Ghost Writer also deals with the impact that the media has on creating someone’s image and their power to influence public opinion. With time, the part of the Prime Minister played by Pierce Brosnan becomes a more universally recognizable character. The Ghost Writer has the potential of becoming an ageless film that will only continue to get better. 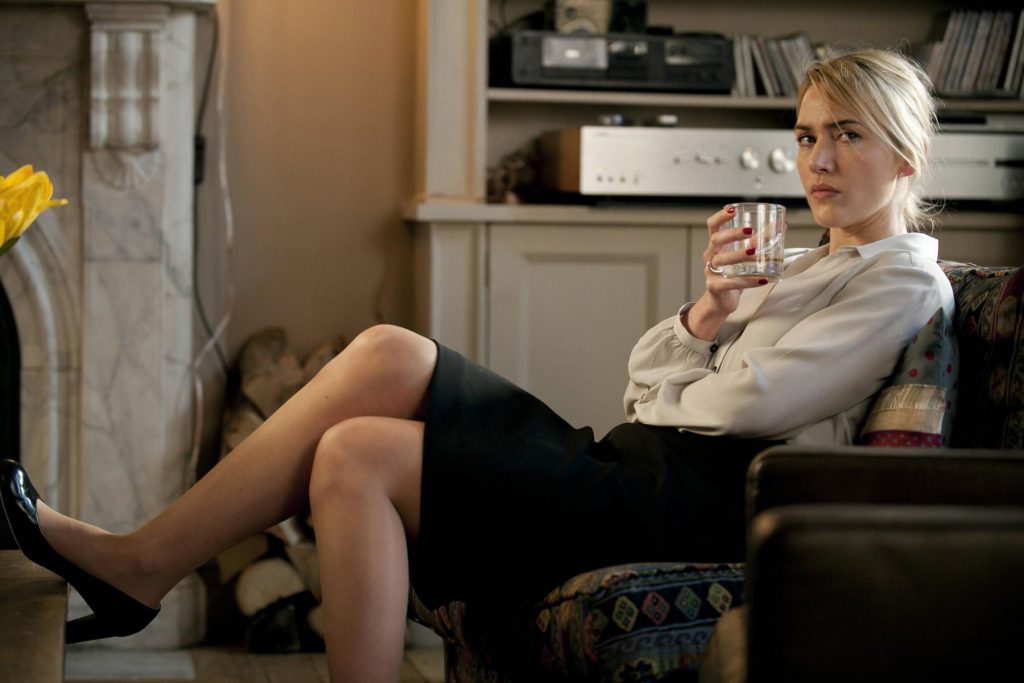 It is not Polański’s first time adapting a play. In 1994 he filmed Death and the Maiden with Sigourney Weaver and Ben Kingsley. It was based on a drama by Chilean playwright Ariel Dorfman. Roman Polański and Yasmina Reza is a collaborative match made in artistic heaven. Cumulation of their biting sense of humour results in a dark comedy about adults behaving like kids.

Carnage takes place only in one apartment but never gets tedious. The film is based on the phenomenal performances by Kate Winslet, Jodie Foster, Christoph Waltz, and John C. Reilly who play two married couples trying to make peace after their kids got into a fight. Constant acceleration of conflict is fueled by actions and comments made without thinking of their possible consequences. The game of appearances between the two couples changes into a struggle for maintaining remnants of their civility. 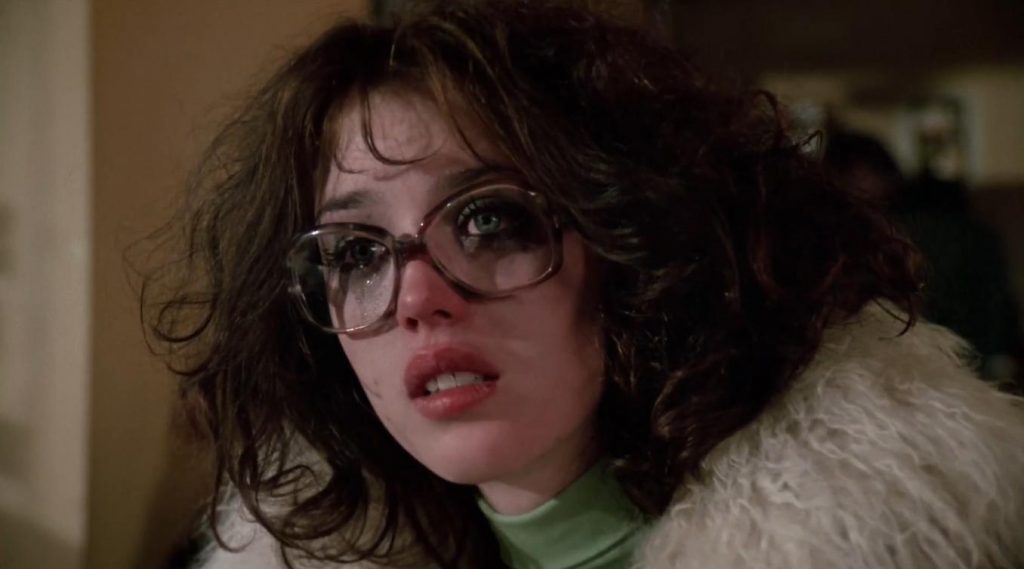 The last film of Polański’s apartment trilogy is a story of a French citizen with Polish roots. The main character is played by the director himself, which adds an interesting layer of interpretation and could allow drawing some parallels between Trelkovsky and Polański. The protagonist moves into a building where the previous tenant tried to commit suicide by jumping out of the window.

The apartment trilogy focuses on the horrors happening to people living in big, modern cities and the dramas taking place within their four walls. The Tenant is a metaphorical commentary on xenophobia and its destructive power that can bring the victim to the edge of sanity. The neighbours seem to be a close-knit community that treats the newcomer with incredible hostility. They notoriously blame him for making their life in the tenement house less pleasant than before. Driven to paranoia, Trelkovsky feels that his life dangerously merges with the life of the previous tenant. 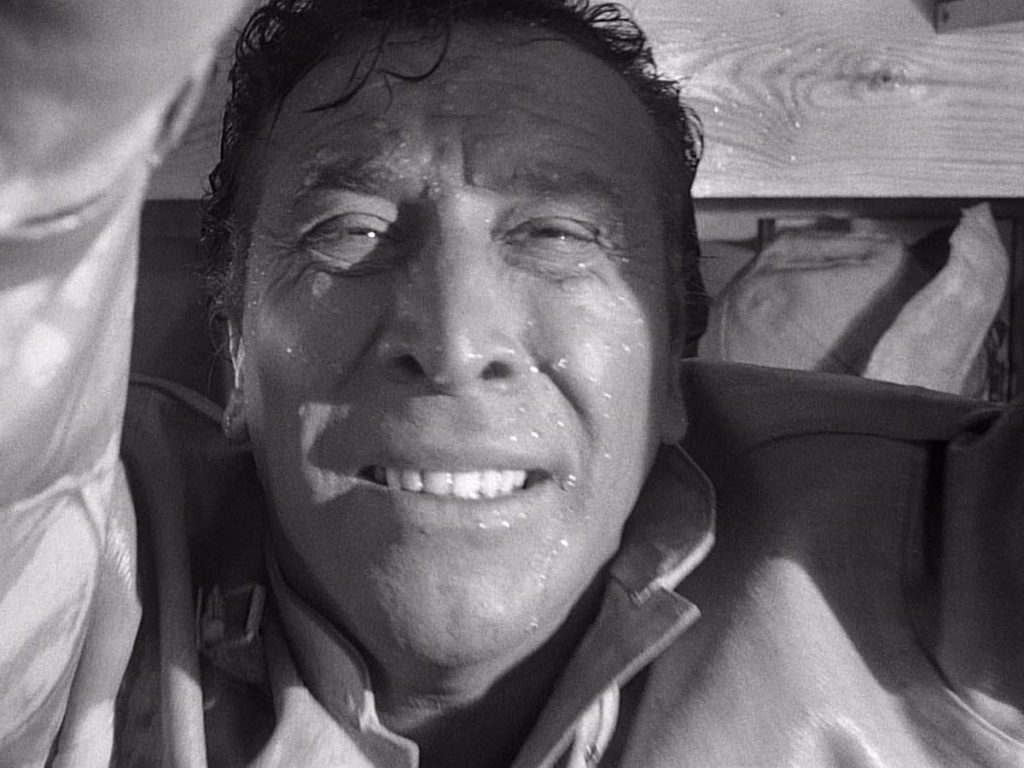 Polański’s first feature film shot just after graduating from the Polish film school in Łódź was a triangle between a successful sports journalist with a high social position, his much younger wife and a young carefree hitchhiker. Their meeting and leisure time turn into a cockfight during which the men try to diminish each other’s worldviews. Polański’s debut was nominated for an Oscar in the category of the best foreign-language film but lost to Fellini’s 8½.

Shot almost entirely on one boat, the film creates a feeling of claustrophobia and entrapment despite open waters and beautiful lake scenery. Knife in the Water remains the only film by Polański that was spoken entirely in Polish. The script for this psychological thriller was co-written with Jerzy Skolimowski, with whom Polański will artistically reunite and create The Palace which is supposed to come out in 2022. 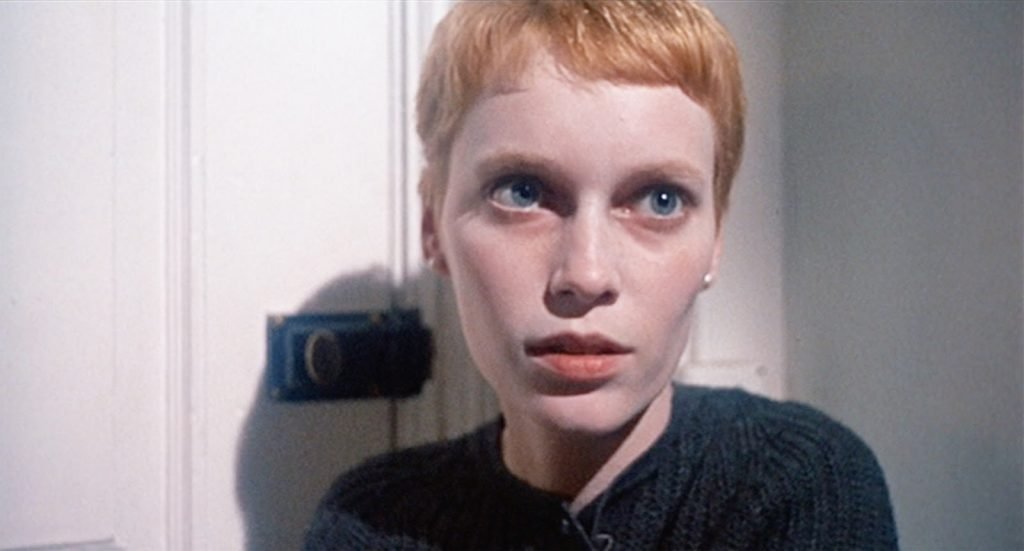 Undoubtedly, one of the most influential horror films of all time and one that has inspired a whole sub-genre of occult movies. What is most interesting about Rosemary’s Baby is the fact that the whole theme of witchcraft and giving birth to an Antichrist can be interpreted only as a delusion of the main character. The film has two layers of truth and gives equal rights to both the supernatural and realistic aspects. In the supernatural, Rosemary got pregnant by the devil himself, whereas in the realistic interpretation her husband is a man so horrible that he is devil-like. Likewise, Rosemary’s neighbours would be considered nightmarish to live with even if they were not Satan worshipers.

As part of the apartment trilogy, Rosemary’s Baby is primarily locked in one New York flat. It changes from being a warm family nest, through a crime scene of marital rape, to a prison-like space where a pregnant woman is kept away from reality. As the story evolves, the appearance of Mia Farrow also transforms and develops. From an adorable and seemingly character-lacking housewife, she becomes a tenacious fighter for the health and freedom of herself and her unborn baby. Choosing Farrow to play Rosemary Woodhouse was probably one of the most interesting casting decisions in the history of Hollywood. 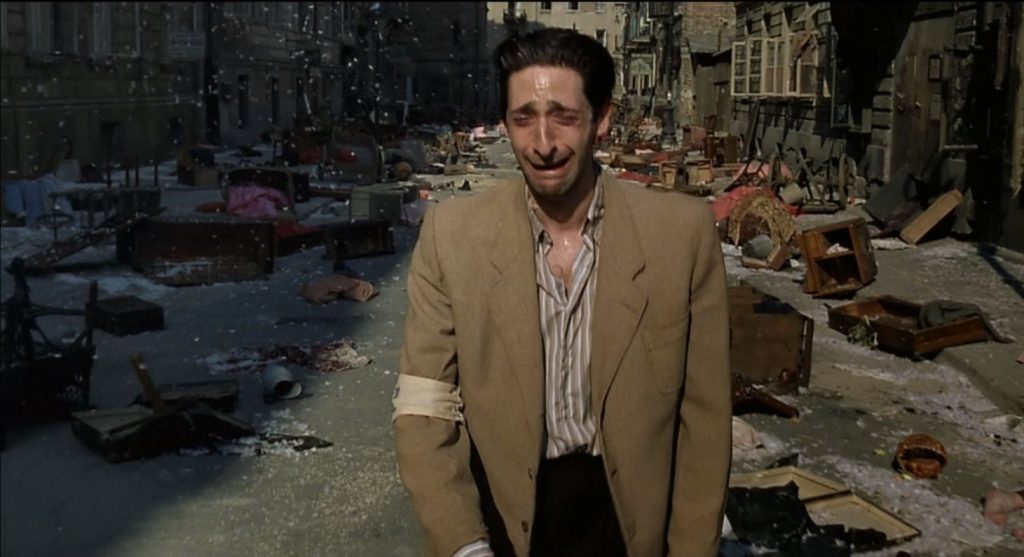 Polański’s wish would be to put the cans with this film on his grave – it is his most personal work and the one he is most proud of. Among many awards, it won him Palme d’Or for best film and an Oscar for best director. The Pianist follows the journey of Władysław Szpilman, a Polish-Jewish pianist, and his life in Warsaw during World War II. When adapting Szpilman’s memoir, Roman Polański took direct inspiration from his childhood years spent in Nazi-occupied Poland and his stay in the Kraków ghetto.

This incredibly moving film does not deal with heroism or martyrology. It is mostly about surviving in a dehumanized world and that art has the power of keeping and asserting humanity. This is also something very true for Polański himself, who always turned to art in the darkest moments of his life. In The Pianist, Adrien Brody plays not only Władysław Szpilman but Roman Polański as well. Winning the Oscar for Brody’s performance is proof of the effectiveness of Polański’s directing craft. Another evidence for it would be the fact, that Adrien Brody never again managed to create a part of a similar weight and importance. 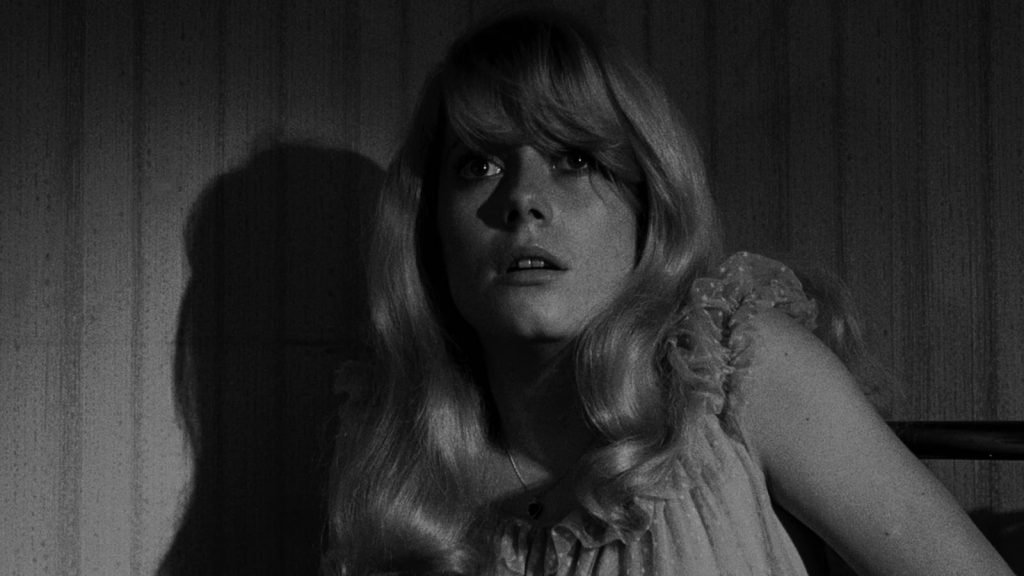 This low-budget psychological thriller about a woman repulsed by sex and men was the beginning of the so-called apartment trilogy. Between her four walls, Carol (Catherine Deneuve) quietly goes insane. She is a modest manicurist from Belgium who lives in London with her sister. Carol is first disgusted by her sister’s boyfriend and later by her own suitor. As the old family picture suggests, she could have been molested as a kid and since then she has had a phobia of men.

In expressionistic shots, Polański shows the deteriorating apartment and how the cracking walls and rotting food reflects the heroine’s state of mind. Repulsion’s pace is quite unhurried, Carol’s disorders start with slow ticks and very slowly turn into anxiety, which forces her to commit murder in self-defence. Polański’s first English-speaking film is primarily an audiovisual experience rather than a traditionally told narrative.

It is especially the sound design that makes the whole apartment space come to life and enhances Carol’s fear. Her phobia and repulsion are shown in an understanding way. After Polański’s sexual abuse case came out in 1977 it is difficult to watch this film without thinking about his switch from an empathetic artist to a perverse criminal. He took the quote by Mark Twain on writing about what you know very literally. Repulsion is a sign of his great directing skills as well as the disturbing psyche.

‘Avatar: The Way Of Water’ Arrives As A Massive Tidal Wave At The Box Office

Avatar: The Way of Water (2022) Review: An Ethnofictional Visual Treasure that Creates its Own Experiential Reality

James Cameron will sit out the LA premiere of ‘Avatar: The Way of Water’ after testing positive for COVID-19.

A Cold Week At The Box Office Before ‘Avatar: The Way Of Water’ Releases. ‘Black Panther: Wakanda Forever’ At The Top In Its Fifth Week