Home»Reviews»Asking for It [2022] Review: An Extreme and Chaotic Representation of Female Vigilantism
Reviews/VOD

The 21st century is defined by a growing consciousness around gender equality. Hitherto, most discussions about weighing males and females on the same scale weren’t more than admirable dinner table conversations. They sounded good and most talked about the phenomenon of feminism just because it seemed the right thing to do. Recently, there has been a trend change. Feminism and related philosophies have attained a centre stage in mass media. This has led to a shift in policy focus as well. Naturally, the beautiful art form of films has caught on. But for sure, ‘Asking for It’ is not the way it should be done.

Turning the tables of vigilantism, the film dramatizes a group of female victims who look out for other women and take revenge on their behest. Each member has some tragic past they cannot bury. Joey, a waitress, falls prey to a sexual assault at the hands of a friend. Regina, a member of the group, takes her in, without knowing about the incident. Parallelly, Mark Vanderhill, an internet sensation and the pioneer of the Men First Movement (MFM) gains more influence over his followers. The two factions eventually come face to face, resulting in the core event of the film. A lot of elements of “Asking for It” feel derivative. It is largely based on ideas that have only recently become clear. Referencing true events and fashioning them into material for movies are not two different things but the same.

Related to Asking for It – Birds of Prey: And the Fantabulous Emancipation of One Harley Quinn [2020] Review- Chaotic, Crazy and Fun to Watch

A balance must exist that walks the slope of subtlety carefully. The film, unfortunately, errs on its wrong side. Despite the tragic events in the women’s lives, an emotional chord is missing. The representation becomes too mechanical and fettered by its previous iterations. Mostly none of the backgrounds is developed sincerely, finding fleeting spaces in conversations between the characters. The exposition of the subject strays far away from an intelligent one. Rather, it falls prey to the tendency to make the philosophical war a zero-sum game. The movie justifies violence in the name of redemption way too casually. The pure “good vs evil” narrative never manages to gather steam. It renders, as opposed to the filmmakers’ hope, the film as a crass mouthpiece about extremism. 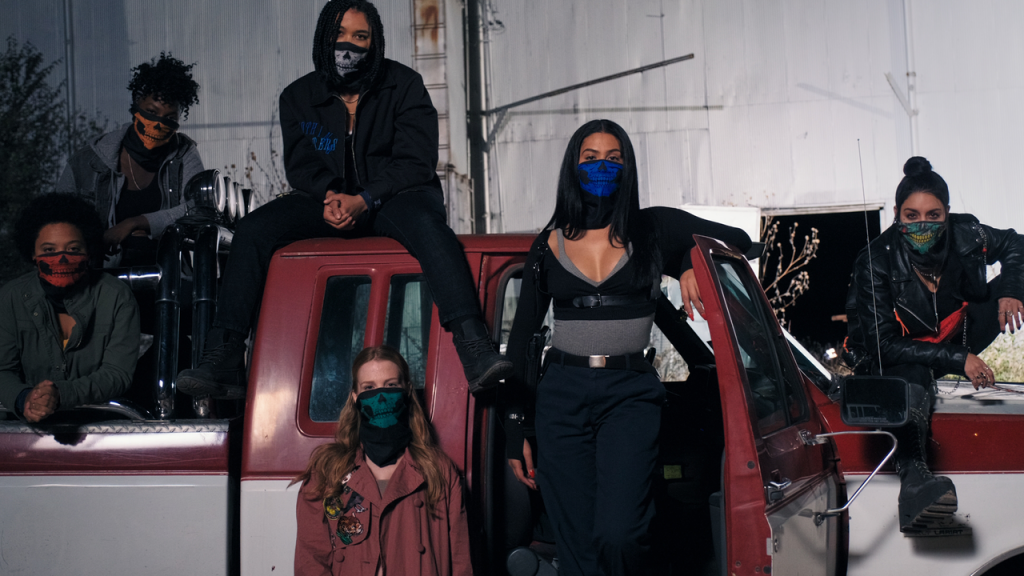 The creative choices in storytelling do not allow ‘Asking for It’ to differentiate itself in a category now populated with some really good entrants. It comes across as a bit of this, a bit of that, and a chaotic mix. The power of the storyteller, as the evil sheriff talks about in the climax, is the spirit of the controversy. This is one element that distinguishes justice from injustice. For most parts, it goes missing. And when it does come up, the occurrence is too momentary to make an impact. MFM, in itself, encompasses the rage of an entire gender today. The movement is pari materia to the real-life movement that has now proven insignificant. Ezra Miller does not really have any measure of opportunity to do anything as Vanderhill, its leader. The narrative is too lopsided and biased to give any semblance of balance.

There are weak attempts to revive the film by introducing subplots, like with Sal and the good Sheriff. The Regina-Beatrice-Joey facet is given some push in the latter half but proves to be a bit too late. None of this seems to work because of how unimaginative and clueless the filmmakers are with their material. Overall, the biggest disappointment in the film is its writing. It is the provenance of all things that go wrong. This once again goes on to show how fundamental the screenplay is in determining how a film will turn out.

‘Asking for It’ pays no heed to balance and the need for authenticity. It seems to be a rip-off from earlier films about the subject and tries to fuse it with the burning rage that is felt instantaneously when we hear of such crimes against women. The film depicts both facets of the discourse on such extremes that it becomes too vile. The skewed narrative does not provide for a healthy and sensitive culmination of thought processes of both genders to reach a beneficial conclusion. Definitely skip this one.

Worst Roommate Ever [2022] 'Netflix' Review: Fictional Villains And Monsters Pale In Comparison To These Bad Roommates