Sci-fi movies, through time, have slowly transformed into ideas and stories that don’t necessarily need to descend into space to feel otherworldly. In fact, the best sci-fi movies that you will find on Hulu have little to nothing in them that signals some kind of outer space extravaganza. And yet, they stand true to the genre in general. These science-fiction tales manage to go beyond the perceivable; giving us an experience that feels otherworldly and yet grounded in our reality at the same time.

The movies on this list are packed with intelligent ideas that use the base of their technologically enhanced world to truly delve into the human psyche and its need to experience change and chaos as its only final outlet. 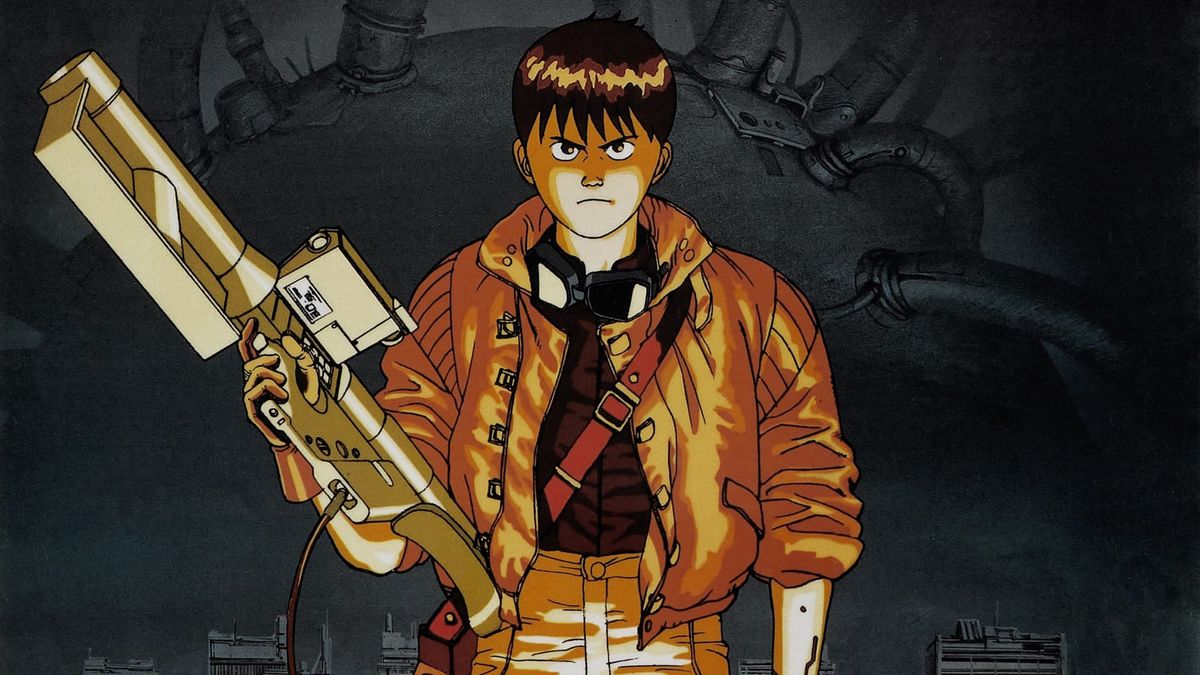 Based on his own manga of the same name, director Katsuhiro Otomo’s 1988 cyberpunk movie Akira is set in a dystopian 2019. Since we are all living in a prophecy that Otomo envisioned, the story tells the tale of a gang of hooligans who ride high-tech bikes and is led by Shōtarō Kaneda. The conflict arises when his childhood friend and gang member Tetsuo gets entangled in a crossfire of military rule and experimental chaos, acquiring telekinetic abilities that put the futuristic Neo-Tokyo in danger of exploding into nothingness.

Having acquired a cult following now, the Japanese animation has to be one of the greatest cyberpunk movies ever made. The kind of impact it has on present pop culture; with references to the film thrown in every now and then makes its influence even more resounding. However, I personally think that it’s the ambition and the vision that makes it truly stand out. With its bloody and violently indulgent storytelling, the film works as a metaphor for the contemporary world that’s getting increasingly dependent on technology. It also helps that it doubles up as an allegory for climate change and how resting to absorb things around us is our greatest asset as it is. 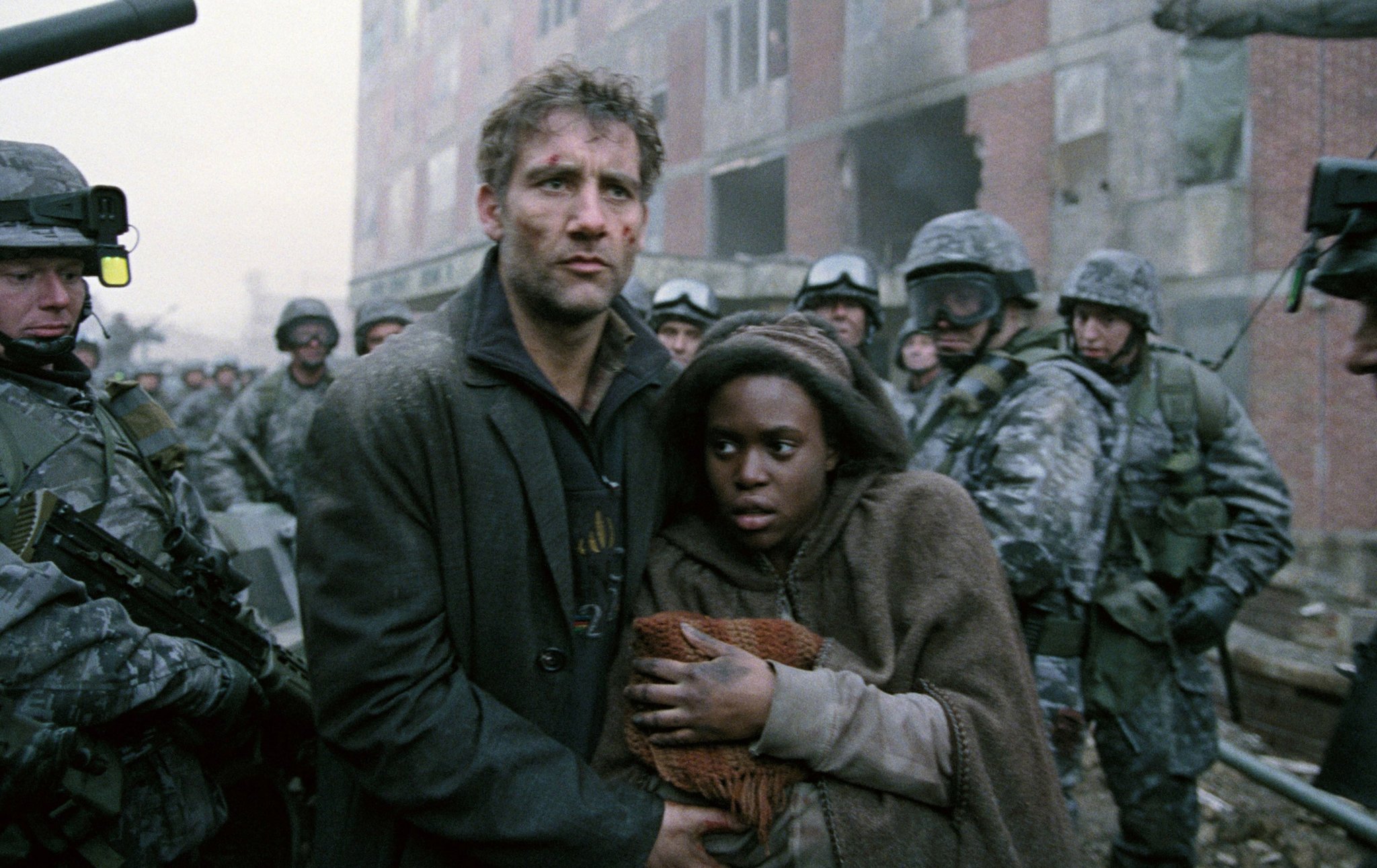 While we are talking about the best sci-fi movies over at Hulu, how can one forget the 2006 masterpiece by Alfonso Cuarón? Children of Men, based on P.D James’ 1992 novel is a dystopian action thriller that takes place in 2027; two decades after the collapse of a society that has no signs of human fertility in plain sight. Since the story is set in the UK, asylum seekers are trying to find a place to live as the government is constantly heckling them.

In what has to be one of the most technically sound movies ever made, Clive Owens stars as Theo – a wholely delusional bureaucrat who somehow becomes the champion of humanity’s last hope of survival. Taking up themes like political disruption, cross-border politics, racial discrimination, and environmental chaos – things that threaten to overturn the world as of today too, Curon delves into a masterful display of brutality in a not-so-distant future, but never for once keeps our eyes away from the last ray of hope that glimmers from within the darkness.

Much before Rian Johnson sort of became a household name; thanks to Star Wars and the Knives Out movies, he made an exceptional sci-fi film starring Joseph Gorden-Levitt, Bruce Willis & Emily Blunt. Set in 2074, Looper is a story about a contract killer (also called called ‘loopers’) named Joe (played by Levitt) who works for a Kansas City crime syndicate in present-day 2044. Since it has become increasingly difficult for these syndicates to dispose of bodies in the future, they have devised a strategy where Loopers take their victims back in time to execute and dispose of them. Everything seems fine for Joe until he is assigned a job to ‘close the loop’ – a term devised for contract killers who survive until 2074 and have to kill themselves back in time.

Now, if even half of that sounds interesting to you, Looper is well worth the buildup. Rian Johnson makes sure he pays extra attention to world-building, making both the 2074 and 2044 setups feel increasingly believable for a grounded sci-fi movie that knows that the real pull lies in the interplay of thematic elements with the sharpness of the technological advancement serving as a backdrop. And what really works for Looper is Johnson’s incredible eye for B-movie thrills that land Looper into the territory of unhinged climaxes. 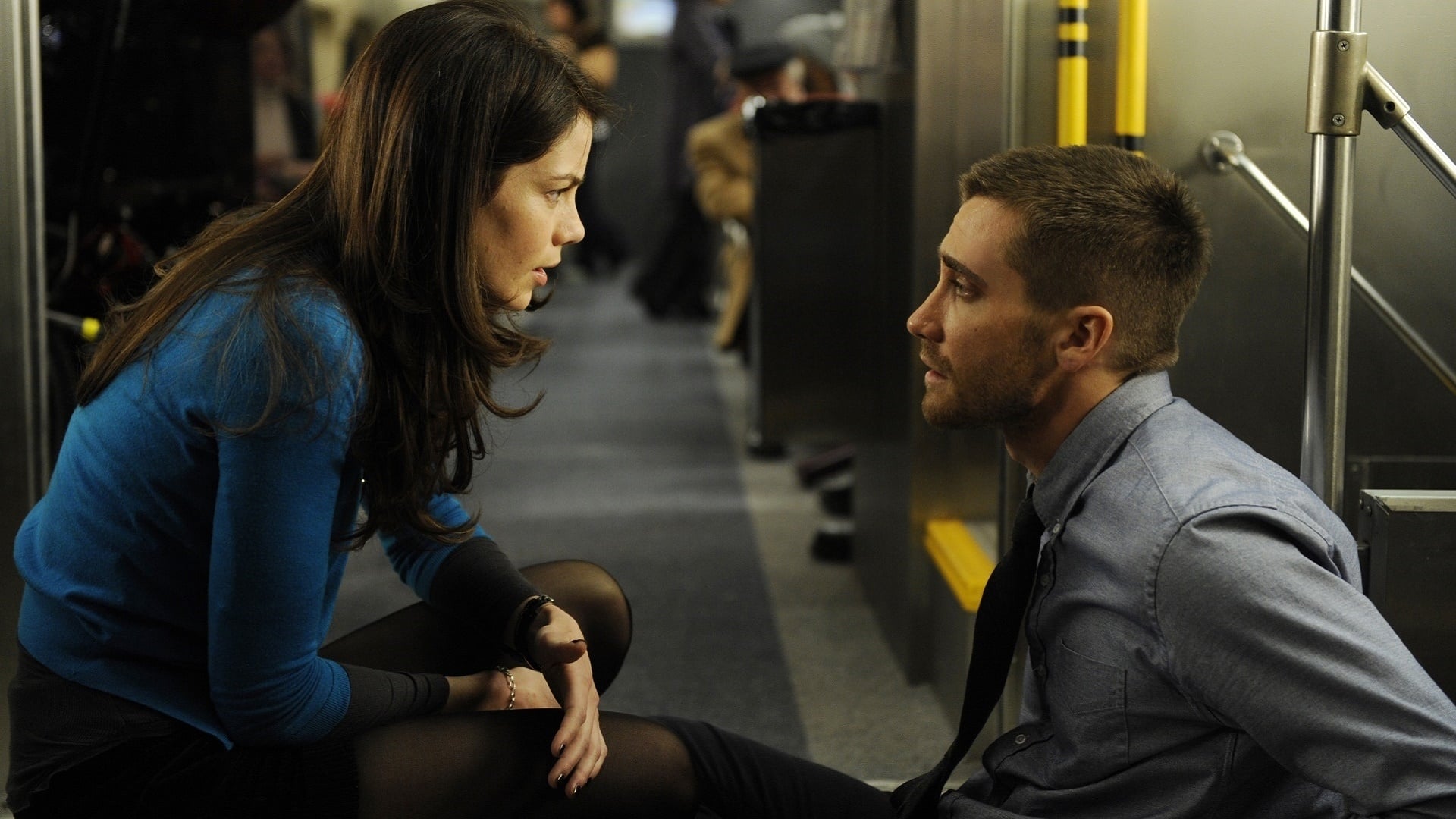 Captain Colter Stevens, a U.S Army Pilot finds himself in the body of a school teacher named Sean Fentress on a Metra commuter train. Before he could make sense of what is going on, the train blasts and everyone on board dies. However, Stevens finds himself in a cockpit where he is told about the latest mission he has to take over. He is assigned to find the bomber who has planted the bomb on the train; thereby also letting them know the person who plans to do more such acts in the future. The 8 minutes that Stevens has within the Source Code – a Government program that reconstructs the past as a simulation, will possibly help him identify the culprit before it’s too late.

Now, director Duncan Jones, working from a spec script by Ben Ripley, understands the dynamic that the now-cliche ‘Live-Die-Repeat’ concept brings to the table. This is why he constructs the narrative by finding the emotional core of this sci-fi story. It also helps that Jake Gyllenhall is excellent, with Michelle Monaghan serving as great second support. As far as thrills are concerned, this fast-paced, tricky simulation uses its tongue-in-cheek premise to deliver an original story that is constantly exciting. Josh Tank and Max Landis have had a really tumultuous career post Chronicle. While the director later made one of the worst superhero movies ever, the writer was never truly able to top his effort here, with the addition of sexual misconduct overthrowing his career for good. But, before we get ahead of ourselves and cancel their 2012 movie, let’s understand why it is both an important piece of science fiction and an intelligent superhero movie.

Following three high school friends who gain telekinetic superpowers after discovering a big hole near one of their party venues, Chronicle leads from fun and games with the newly found freedom to discovering how to channel and improve on them, before it gets dark and demonic in ways you won’t anticipate. The use of found footage can feel a bit gimmicky when you see the film now, but back then; it managed to give authenticity to a superhero origin story, making the raw visuals compliment the turmoil it later descends into. Indie filmmaking duo Justin Benson and Aaron Moorhead have carved a niche for themselves with their low-budget, high-concept movies that often deal with the existential dilemma that a wobbly future and a confusing present bring us to. They have somehow managed to conjure up some of the most interesting and original concepts out of B-movie sensibilities, making their work feel some kind of groundbreaking.

With Spring, which has to be one of the best fantasy movies currently streaming on Hulu, the director duo follows Evan played by Lou Taylor Pucci as Evan – a young man, who, after losing his mother and getting into a bar fight; flees the US to reach Italy. There, he meets a beautiful, seductive, and smart woman named Louise (Nadia Hilker), who he instantly falls in love with. However, all doesn’t go as planned and the woman’s secret threatens to unravel a future for Evan that he isn’t ready for, but cannot escape. Based on Jordan Harrison’s play of the same name, Michael Almereyda’s sci-fi chamber piece Marjorie Prime is a moving, low-key drama that reminiscences about memory, loss, and the way the human psyche works and perceives things. While its sci-fi elements are trivial for the lack of a better word, the movie follows 86-year-old Marjorie (Lois Smith) who chooses to be with a computerized, younger version of her deceased husband, in order to understand his life, or a projection of his life a little better.

While not groundbreaking in its efforts, or even wholly original, this dialogue-driven drama stars Jon Hamm as Walter, the A.I. that Marjorie, and later her family decided to hire. And while he never truly becomes a rounded character, the way the family learns and unlearns the reality of their life through Artificial Intelligence as their only viewpoint, makes for a very interesting and meditative look at what love means to different people. Just when we thought that the time-loop concept was slowly dying a painful death, Max Barbakow revisited and injected new energy into it. Written by Andy Siara, the movie follows Nyles (Andy Samberg) & Sarah (Cristin Milioti), two strangers who bond at a wedding reception and while hooking up, end up getting stuck in a continuous time-loop that resets the same day again and again. Sarah, who is new to the time loop, doesn’t listen to the laid-back-accepted-his-own-fate-veteran-to-the-loop Nyles and tries every trick in the book to break the curse of the day repeating itself. However, her efforts only meet failure and the two misfits find each other while trying to make the most of their sorry situation.

Now, Palm Springs does feel like a straightforward romantic comedy, and to an extent, it is. However, Barbakow injects it with just the right kind of energetic charms to make it well worth the familiarity. Both Any Samberg and Cristin Milioti are absolutely funny people and they are in crackling form here with a back and worth that is as witty as it is loveable. It also helps that within the repetition, Barbakow somehow throws in a sleek metaphor about married life and how acceptance of the uneventfulness of life is the only way through. Sputnik is a strange beast of a sci-fi movie that crosses a creature feature with the alien horror genre; but gives it all a surprisingly political Soviet-era twist. Directed by Russian filmmaker Egor Abramenko, the film follows a young Doctor named Tatyana Klimova (Oksana Akinshina), who is brought in to psychoanalyze the Russian cosmonaut whose spacecraft crashed into Kazakhstan before being brought to an isolated Russian military facility in the hot period of the Cold War.

She is asked to use her unconventional methods to help Konstantin (Pyotr Fyodorov), who has become an unlikely host for an extraterrestrial creature that has found refuge in his body. Tatyana, with her intelligence, digs deeper into the working of the creature and how she can possibly tame it to leave Konstantin’s body. But, alls not well in the alien world, and horrific thrills ensue, making Sputnik one of the most engrossing and suspenseful alien sci-fi movies currently streaming on Hulu. 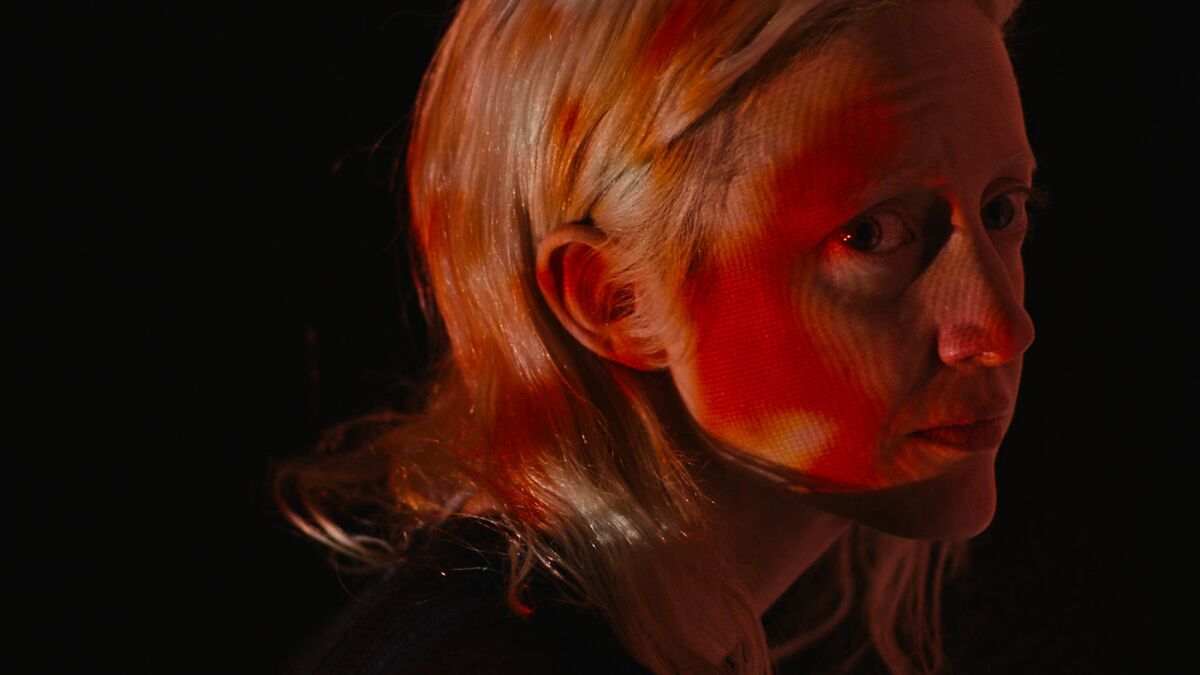 It wouldn’t be fair to culminate Brandon Cronenberg’s lean body of work with that of his father’s. While David Cronenberg has built an incredible oeuvre by literally giving birth to the body horror genre, Brandon uses the viscerality of extremely stylish yet bloody atmospheres to dive into truly original sci-fi premises. After going for the fences in Antiviral (2012), he returns with Possessor, an unhinged and unnerving look at pretending to be somebody else; all the while losing sight of who you are.

Starring Andrea Riseborough as Tasya Vos – an assassin who takes her targets out by carefully aligning her consciousness over someone else, leaving the ones close to the victim to take the blame. In an alternate 2008, Tasya uses a special machine to slowly insert herself into the host’s consciousness, thereby forcing them to off themselves once she has completed her mission. However, due to extreme burnout from this tedious task, Tasya is losing herself, making her own identity feel like a lost cause of sorts. If you’re up for something truly unsettling, Hulu is now streaming an uncut version of this mind-boggling sci-fi movie.

Lou (2022) Netflix: Movie Review & Ending Explained - What Does Philip Want From Lou And Hannah? Is Lou Alive After Her Fight With Philip?