Building a Bridge Review: In Evan Mascagni and Shannon Post’s first documentary, ‘Circle of Poison’ (2015), we first travel to the cashew farms in Kasargod, Kerala. The images of children with cerebral palsy, cerebral edema, and swollen heads due to the use of endosulfan in the region are pretty clear. For nearly 30 years the effects of pesticides have turned their lives awry. The documentary was inspired by a 1981 book of the same name by David Weir and Mark Schapiro. It featured Weir and the celebrated Noam Chomsky, the Dalai Lama, and the controversial Vandana Shiva.

In their second documentary, ‘Building a Bridge,’ Fr James Martin is buying the flowers himself. I could not help but think where they came from. This film is particularly following a summer shooting in a popular queer nightclub called Pulse that ended the lives of 49 people in 2016. “Even in tragedy its members are invisible,” Martin wrote in his 2017 book of the same name, which in actuality is a talk extended to an essay subtitled – How the Catholic Church and the LGBT Community Can Enter into a Relationship of Respect, Compassion, and Sensitivity.

The degrees of acceptance within the highest ranks of Catholicism are explored by priests who dissect the statements made by popes. A 1986 letter to the Congregation for the Doctrine of the Faith, apparently, said that “they condemn violence against gays and lesbians, but we shouldn’t be surprised if irrational reactions set in.” From then to now, where Pope Francis says, “who am I to judge?” providing the hopeful opening to this documentary, with a pleasant score by Teddy Abrams and Nathan Farrington.

That issue that I had going through the essay is addressed early on in the film by Xorje Olivares. He says, “I don’t like how it seems as though we are meant to meet the Church halfway when the Church is the one that’s pushing us aside.” Olivares and his team members are at the LGBTIQA+ ministry of St Paul, the Apostle Church. The others challenge Martin’s book, too. “He didn’t talk to members of our community,” says Marianne Palacios, another team member. One of Martin’s fine qualities is that he listens, and the second edition of the book apparently says that the onus is in on the church. 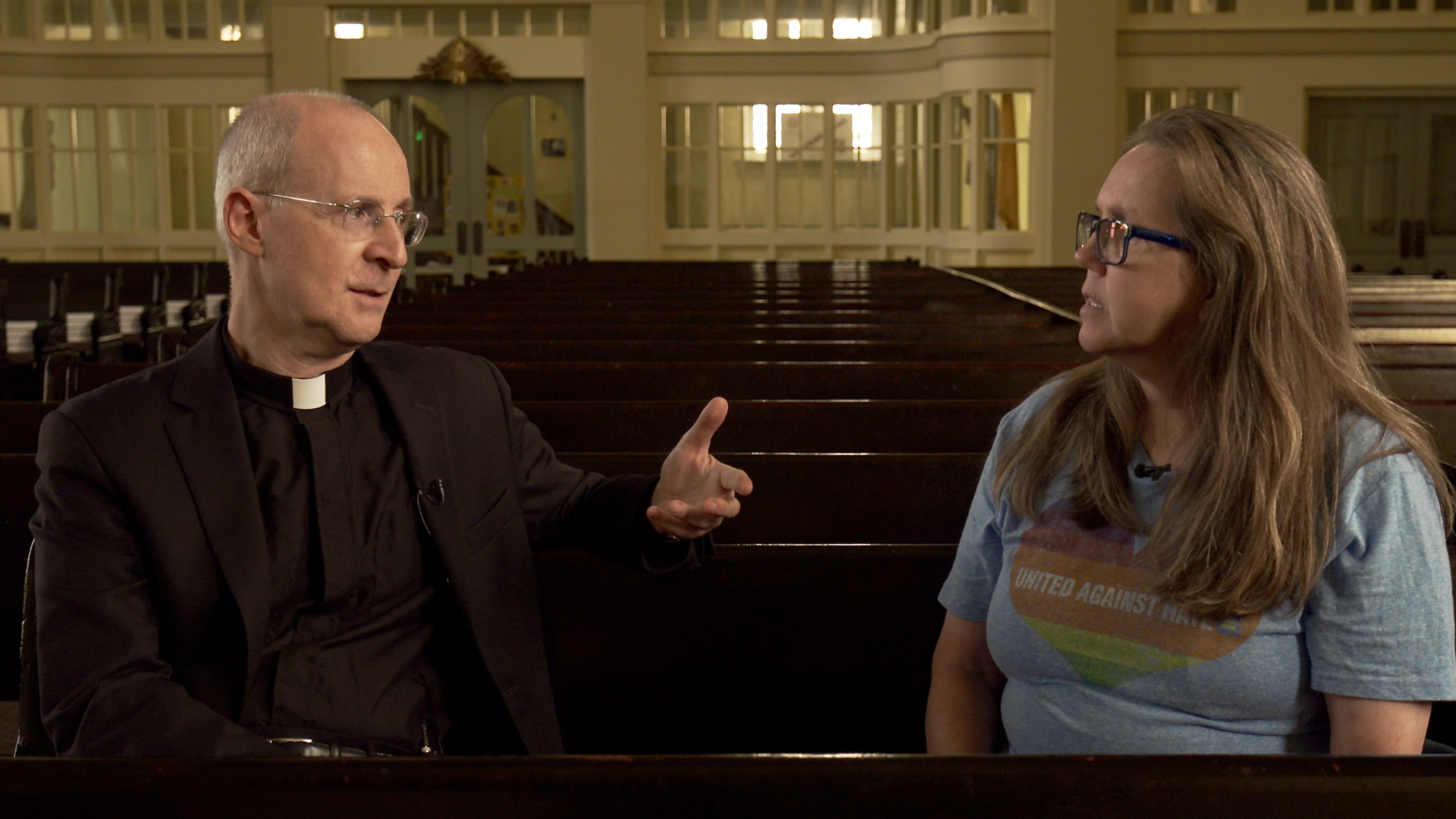 Meanwhile, there is Michael Voris, whose story is the stuff of fiction. Initially, it seems as if he is somewhat aware of his portrayal in this documentary as he grants the filmmakers access to his chapel, news studio, jeep, home, and pet dog. He is the founder of St Michael’s Media, and hosts a show called “Vortex, where lies and falsehoods are trapped and exposed.” He seems to have his own interpretation of the cross, and his anti-Martin reporting is one of the many within the Catholic community. It’s also about the media that does not approve of the queer crusader role he has taken upon ever since the 2016 massacre happened.

There are trolls on Twitter and Facebook, too. Throughout this, Martin’s smiling face and calm presence where he is always trying to find something funny in conversations and talks make him a subject interesting enough to film. His religious role, sermons, and reach make him a subject worthy enough to document. He seems mildly interested in fame even though he claims not to be. He has been on Colbert 10 times, most recently for his new book, which came out in February 2021. An editor-at-large of America, a Jesuit magazine, Martin has authored many books before the one this documentary takes its name after.

Mascagni and Post have also produced the film along with the cinematographer Nick Capezzera. They have got rid of the celebrities – although Martin Scorsese is an executive producer and the narration is by Elizabeth Kucinich, they did a fine job with this one. Their first outing seemed to tackle a global issue using Weir’s work while this one seems to work the other way round. Martin is their subject and through him, they address the issue of finding more of an accommodating home for LGBTIQA+ Christians.

That seems to be an issue, local or global when we learn that the parents of one of the 49 individuals who died in the massacre did not come to the shooting site because he was gay. Martin’s words also provide hope and faith to a family of five queer individuals to keep at it. I wish the documentary were part-Martin, part-stories; nonetheless, there are a few in between which can knock you out more than any of Martin’s speeches. And Martin is an excellent speaker.

I guess it was a conscious decision then to focus almost entirely on Martin as he lays the foundation stone for the bridge in the US for believers of Catholicism. By appearing in television news shows – which mean directly into their homes, he is making an effort to change the mindsets of people who think being queer is abnormal. ‘Building a Bridge’ and its filmmakers advocate this combination of hope and faith. As he quotes a judge, who is a friend of his, “God loves you and your church is learning to love you.” Times are indeed dark if institutions of any kind need to be given time to learn when they are supposed to provide examples of exemplary behavior. But who am I to judge?

Brighton 4th [2021]: 'Tribeca' Review - The journey of an ex-wrestler is a poignant and funny father-son story