I came across Dark in 2017 because it was billed as the German version of ‘Stranger Things’, the Netflix sensation and a pastiche super-cut of nostalgia-inducing 1980s American pop culture.  Stranger Things is the kind of series that could be better enjoyed if you don’t read too much into it and yet the subsequent seasons felt, to borrow Chuch Palahniuk’s words, “Copy of a copy of a copy.” Dark, on the other hand, is a groundbreaking television which unpacks fascinating existential and temporal paradoxes through a very human multi-generational saga. The series’ creators Baran bo Odar and Jantje Friese offers a more deterministic, nightmarish universe in Dark unlike any of those gallingly vibrant battles between American suburban kids and alien monsters. In a way, Dark evokes more of David Lynch’s Twin Peaks as it also weaves a twisted, mind-bending tale set around a group of families and a small town.

By the end of season 2, we know the sleepy German small-town of Winden is totally fucked. All the efforts made by time travelers to stave off the apocalyptic explosion at the town’s nuclear power plant get thwarted by self-serving humans in the link and due to seemingly impossible scientific forces. Every time the fog of mystery is about to be lifted, we learn that the developments are predestined and how every human action is determined by causes that are beyond an individual’s will. People who are on the mission to change the events inadvertently make sure that the pattern repeats itself. And of course each person is just a piece in the puzzle whose entire design is yet unknown. Or to sum it up, Dark poses some of the mind-boggling ‘chicken-or-the-egg’ questions. 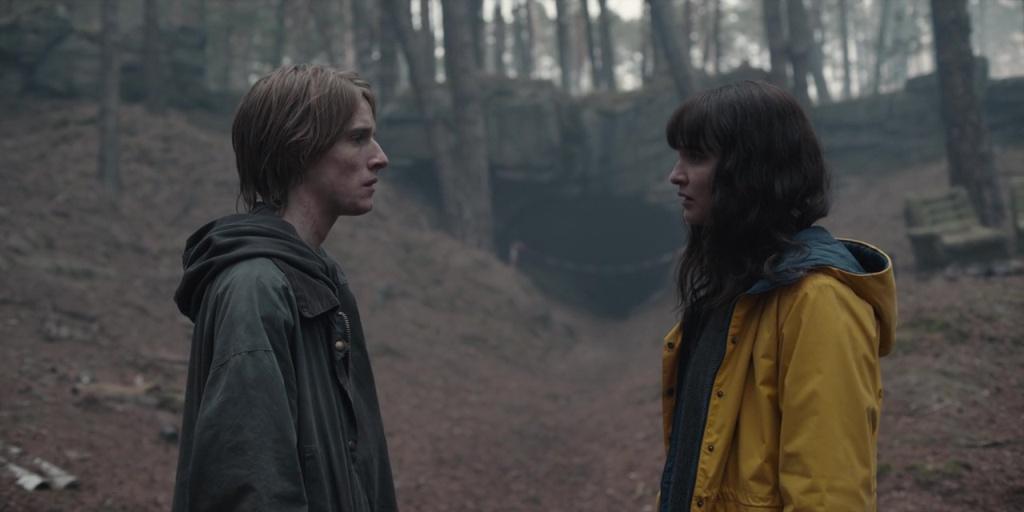 Season 2 ends on a curious note as the show’s young protagonist Jonas Kahnwald (Louis Hoffman) crying over the corpse of his recently-killed girlfriend Martha (Lisa Vicari) suddenly encounters another Martha. This other Martha says, ‘the question isn’t from what time, but from what world.’ Season 3 opens in the alternate Winden on November 4, 2019 – the day Jonas’ world changed. But in this Winden, Jonas doesn’t exist because his father Mikkel aka Michael Kahnwald never traveled back in time to 1986. In the alternate Winden, Martha wears the yellow raincoat and takes up the responsibility to stop the apocalypse. Yes, the alternate Winden also gets annihilated on June 27, 2020. Apart from few changes and fresh conflicts, the interconnected families of Tiedemann, Doppler, and Nielsen carry the same malevolence and unexpressed angst.

Apart from offering a stunningly level-headed take on time-travel, Dark features the most twisted family trees ever witnessed on-screen. With each jaw-dropping revelations of who’s born to whom the basket of unexpected twists keeps filling quickly. However, after a point, you’d get that all of them are small pieces in the puzzles and you don’t need to crush your brain in figuring out the family tree. There’s an unbelievable elegance and clarity in Odar and Friese’s storytelling that despite traversing through multiple timelines and two different worlds, we can somehow keep track of everything happening on-screen. And it all ends on a high note with an emotionally gratifying finale that rewards our patience and perseverance.

The season 3 of Dark recognizes the human tendency to see things in dualities, to search for patterns, and the fixation to make sense of things however chaotic and overwhelming the details are. Furthermore, Odar and Friese settle on the microcosmic battle between Jonas and Martha, who are dubbed as Adam and Eva. The macroscopic details of the origination point of each individual and events are also portrayed with efficiency. Such details close all the alleged loopholes or lingering questions in the narrative. But it is the deeply fulfilling conflict between Adam and Eva that offers the narrative its rich subtext and astounding emotional range. Though the overall conflict can be reduced as one waged between the good and bad, each character is actually fighting the brighter and cynical versions of themselves.

When Adam and Eva learn they are the origin and solution to the apocalypse, the quandary becomes a metaphor for the human race, which knows it is the poison on earth and yet doesn’t take a step to solve the impact of its transgressions. And for all its desaturated colors, persistent gloom, and dour iconography, Dark closes the loop on a hopeful note. Despite the relentlessly brooding questions on mortality, human will, pain, grief, fatalism, and implications of time on human existence, the finale of Dark says there’s still hope. In a reality strictly colored by one’s perceptions, love happens to be the only clairvoyant force that seems to liberate us. It might have been recited a lot of times, but never within such an in-depth inquiry of time and the human condition.

Overall, the final season of Dark once again demands careful, patient viewing and in turn bestows a more satisfying end to the mind-bending journey. It’s a wonder that such a complex mix of emotions, philosophy, and science flows smoothly.