Home»Reviews»Netflix»David Attenborough: A Life on Our Planet [2020] Netflix Review – A Clarion Call to Save the World
Netflix/Reviews

It is heartbreaking to see a 93-year-old man (now aged 94) on-screen pleading humankind to stop destroying the love of his life – Mother Nature. Sir David Frederick Attenborough has traveled to the remotest corners of the world, since his 20s, and allowed us to peek into nature’s expanse of life through his award-winning documentaries. Over the years, his documentaries have awed us with their breathtaking images of wildlife, gorgeous natural landscapes, and the sparkling spectacle of the oceans. But, this one is a bit different and perhaps the most pressing of all. Although it does have some beautiful visuals of the natural world, brilliant musical scores, masterful editing, and crisp direction (all that is expected of a David Attenborough featuring documentary), it is the urgency of his message that takes foremost importance in the documentary.

David Attenborough: A Life On Our Planet (2020) stands as a cautionary message from one of the biggest nature lovers to each one of us. “Human beings have overrun the world,” he says. If we continue living the way we have been till now, our species will be wiped off. We have already murdered so many species through our exploitation of the natural world. If we don’t stop now, we will be next! This Netflix original film opens with Sir David taking us through the desolate town of Chernobyl, which turned uninhabitable after the nuclear power plant accident in 1986. It is considered to be the biggest man-made disaster so far. Sir David reminds us that bigger catastrophes are underway which are invisible to us, and once we reach that point in the future, there would be no going back. Scary! Isn’t it?

The first 45 minutes of the film are a witness statement of the natural historian, who explains the evolution of human civilization and the devastating impacts of modernization on planet Earth, particularly, through the course of his lifetime. For 10,000 years before his birth in 1926, the earth’s average global temperature didn’t increase at all. But in the last 100 years, the average global temperature has increased by one-degree celsius. And, he predicts that by 2100, it would increase by 4-degree celsius! The rate at which we have destroyed and are continuing to destroy the biodiversity of flora and fauna, under the garb of growth and development is alarming. We have already destroyed half of the world’s rainforests by axing 3 trillion trees. Every year, we cut down over 15 billion trees. Whereas, our population is exploding beyond control and so is our consumption behavior. 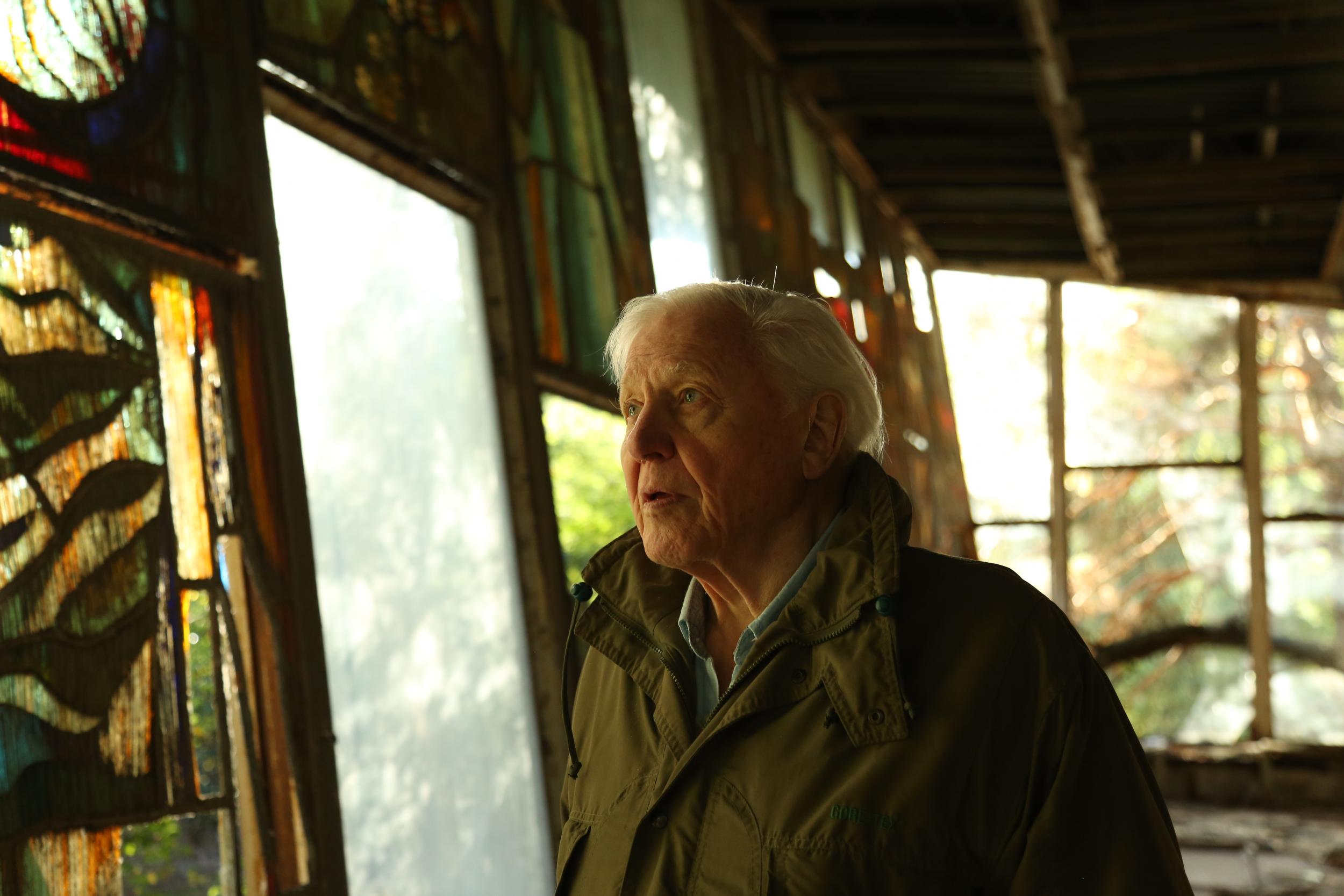 In our never-ending greed for more control, we have not restricted our exploits to just toying with the land; the oceans and seas have equally borne the brunt of our cruelty. 90% of the large fishes have been removed by us from the water bodies. Global warming is leading to the melting of arctic ices that had till now played a key role in keeping the global temperatures in check. Ice reflects the sun’s rays causing the earth’s surface to remain cooler. The heat produced due to our massive carbon emissions is so uncontainable that even the oceans are unable to absorb it all. In the documentary, there is a sequence in which we are brought face to face with a series of disturbing visuals of the projected future. It’s a grim portrait of a harrowing future we all can foresee but choose to overlook. But according to Sir David, we still have a chance to change it. For that, we need to act NOW!

In the final 30 minutes of the documentary, Sir David offers us the solution for saving the human race. He says we must understand that our survival depends on the survival of everything around us in nature. The critical role that the biodiversity of flora and fauna play in maintaining ecological balance and harmony, cannot be ignored anymore. We must work with nature rather than against it. “Nature must be rewilded,” he says. Sir David mentions how Costa Rica has replanted almost two-thirds of the trees they had cut. Reforestation has had a huge positive impact on the country’s climate and biodiversity.

Sir David strongly advocates the use of renewable energy sources including solar, wind, water, and geothermal power instead of fossil fuels, if we hope to stand any chance against mass extinction. He explains how Morocco, which used to be entirely dependent on oil and gas for energy, now utilizes solar power for 40% of its energy needs. They have the largest solar plant farm in the world. If all countries can learn and take inspiration from each other’s indigenous solutions, it is indeed possible to save the world. The closing shots of the film take us back to Chernobyl. This time around, we get to see the trees and greenery that have covered the town’s landscape in entirety. It is now home to a variety of flora and fauna, not found previously in the area. The absence of human civilization has allowed them the opportunity to flourish.

Sir David Attenborough asserts that nature will take care of itself even if we are gone. Our self-centered approach of considering ourselves as the center of the universe is proving too costly for our entire species. We need to collectively change if we wish to leave a better world for future generations. His message is loud and clear: If we want to save ourselves, we need to start treating nature with respect.

David Attenborough: A Life on Our Planet Trailer

Welcome To Sajjanpur and the “Quirky Heartland Comedy” Trope