From Where They Stood [2021]: ‘Berlinale’ Review – A moving document of the Holocaust revealed through photographs

From Where They Stood (À Pas Aveugles), Christophe Cognet’s searing documentary, premiering at the Forum section in the Berlin International Film Festival, begins with rain. As the rainfall strikes a swampy grassland, it brings out fragments of white particles from the soil. When the soil dries up later, these white fragments settle above, forming the ground layer. These white fragments are nothing but pieces of bones of those killed in the Nazi concentration camps. The earth reveals past threads as we walk upon them. From Where They Stood follows this revelation to investigate memories of the war, as it traces few astonishing clandestine photographs taken by the prisoners themselves, risking their entire lives in this process.

Cognet revisits the places from where these photographs were taken and investigate the position of the photographer, his/her subject, and moreover- with the assistance of interpreters and camp historians, tries to excavate the details hidden from its surface. Photography, at that moment, was a courageous act- an act of resistance. In that context, Cognet places his audience at this threshold of history from where one has accepted fate, and still resisted by capturing them in operation.

Similar to From Where They Stood – The Fam [2021]: ‘Berlinale’ Review – A mercurial coming-of-age portrait of a group of teenage girls at a care facility

One photograph is considered at a time and it is presented to us without context. Then the information about the same is provided as the picture cuts to a black screen. When the picture resurfaces again after the information, it holds that insurmountable weight of history. Also, as for most of the photographs which are placed within the actual site, Cognet’s lens, handled ably by Céline Bozon, ushers us into the middle ground of the past and the present. These spaces have changed- the buildings and structures have been retouched and sometimes the trees cut down- yet as the present treads upon these very roads of history, their significance feels very much intact. 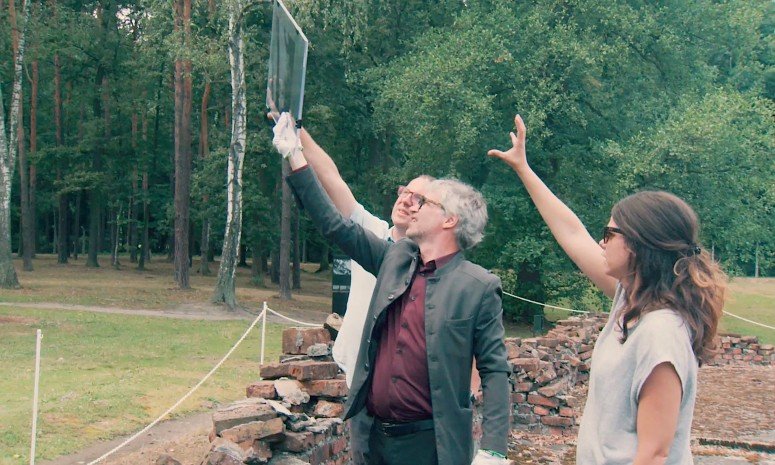 In one particularly moving moment, a revelation is made about the erasure of some details in a photograph. Some of the prisoners sunbathing just beside an actively operating cremation ground. These figures were later retouched with a ballpoint pen, perhaps to remove any justification that the entire moment was any less gruesome than imagined. But this imagination holds no significance to these figures laying themselves bare, as they have accepted death and chose to stay indifferent to it.

By the end, these photographs become horrific and extremely difficult to process. The realities exposed through the medium of photography are never less than extraordinary and audacious- it reveals not just about the subject of the photographs, but also about the standpoint of who dared to capture them as a subject itself. From Where They Stood earns its title from this instinctive act of bravery- of capturing these inhumane acts of fascism through an artistic medium.

Also, Read – Censor [2021]: ‘Berlinale’ Review – An uneven homage to video-nasty and the aftermath of violent proceedings

Another medium that From Where They Stood actively involves, is the cinematic medium. How far can its premiere at Berlin be justified, when most certainly its audience is sitting in the dark with strategically placed concepts of entertainment? In that regard, one may also ask how far can Elem Klimov’s 1985 masterpiece Come and See be viewed with that concern? The answer here perhaps lies in the presentation of history. Michael Haneke’s point must be reinstated here, that whether or not the gas will come out of a shower in a gas chamber (with reference to Steven Spielberg’s Academy Award-winning Schindler’s List), is an “unspeakable” act that reduces the horrors faced by humanity to a mere form of entertainment. The justice lies in the presentation of facts just as it is, understanding the public memory of the Holocaust in the age of decolonization. For that reason alone, From Where They Stood feels acutely aware of its position in the cinematic medium.

From Where We Stood is a moving document on resistance and evidence, that begins with us looking through these archives, and ends with the consideration of where we stand at this juncture of time and history.

From Where They Stood [2021]: ‘Berlinale’ Review – A moving document of the Holocaust revealed through photographs