Pardon me if I am being biased to a particular film industry when I say, no part of India makes consistently charming, low-key dramas that center around some nice, real, and not-so-talked about issues as much as Malayalam cinema does. Manjadikuru, Virus, Android Kunjappan, Kappela, Ishq, and the list goes on. Last year’s addition to it was Nisam Basheer’s directorial Kettiyolanu Ente Malakha (My wife, My angel) starring Asif Ali.

All of these films like Kettiyolanu Ente Malakha have a certain, precious quality to them that arises out of a set of characteristics they usually have- a certain lived-in feel of the milieu and the rooted characters that populate them, a complete lack of heavy-duty dramatics, a well-rounded appraisal of one or more main characters that easily rise above clichés and hold the viewer’s sympathy despite not being so likeable in the conventional sense and most importantly, the presence of women and their remarkable influence in the proceedings, an aspect that easily tinges the narrative with an element of progressivism. Kettiyolanu Ente Malakha (KEM) has a title that appears to have been stolen from a lovelorn, melodramatic paean sung by a man to his wife but it is interesting that the film bears no such kitschy pretensions to appeal to womenfolk. In fact, the film is nothing but a quiet and a charming character-study of a married man who hitherto has led a self-contented life that barely had time for any romantic attachments. 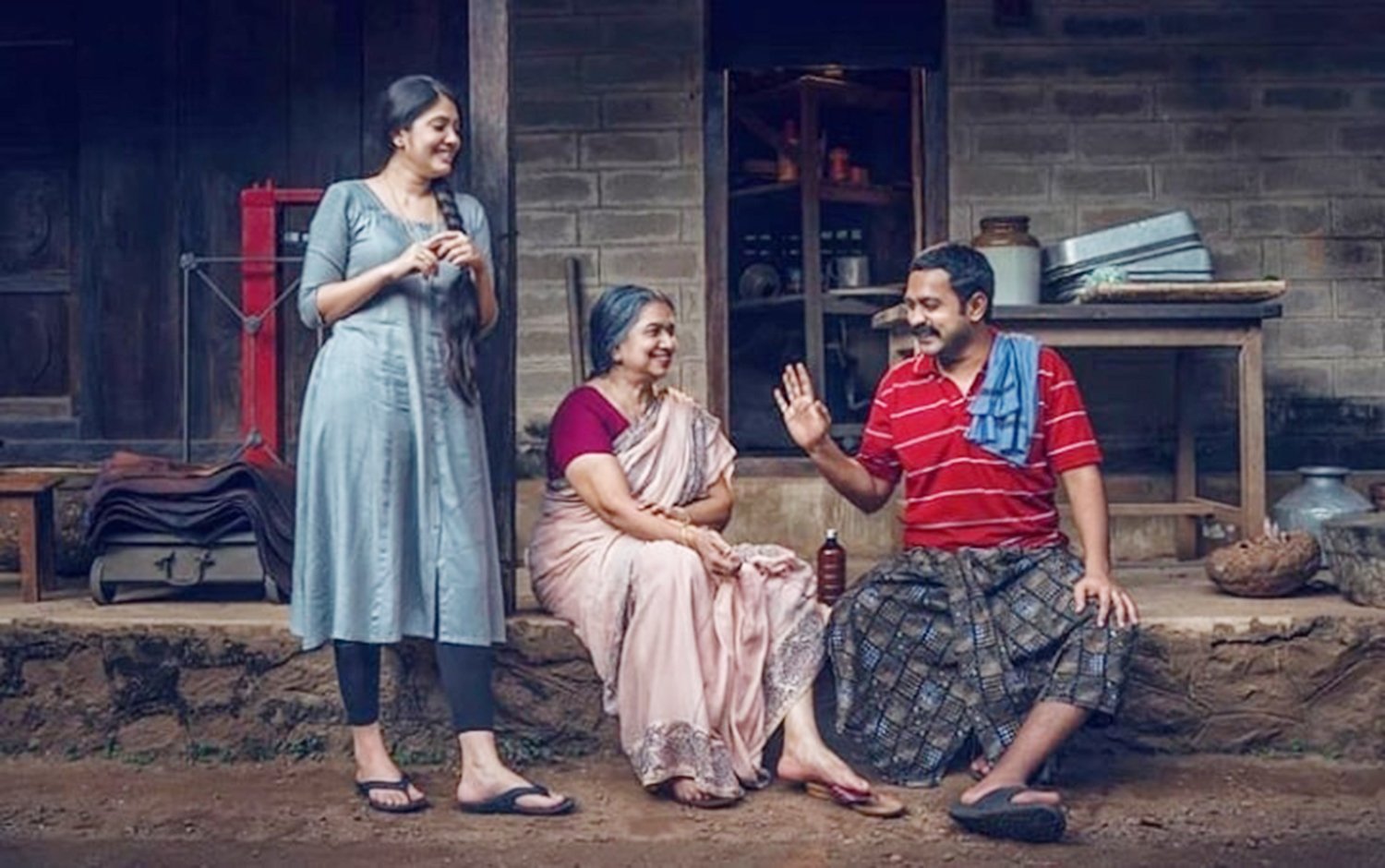 Sleevachan, the protagonist checks all the boxes if you are to get your daughter married to him – he lives with a single parent, a nice, caring mother who knows how to take care of her daughter-in-law with the experience gained from bringing up four girls who are all married and settled now, he owns land in two-digit acres and is a farmer who knows everything about his trade, he is religious and well-regarded by the local church and his vast circle of friends and relatives. But there is one major issue with him which might be considered by some people only as an addition to many of his plus points – he is thirty-five but has never dealt with women at all apart those belonging to his family. This lack of acquaintance with women is again not an issue at all per se, but Sleevachan’s discomfort with the female gender has unfortunately ossified into a sort of a fear that cannot be surmounted without taking external help. He meets the Bishop in the church who played a role in getting his marriage arranged and reveals his problem to him only to be brushed aside nonchalantly.

Sleevachan’s marriage takes place with a charming girl named Rincy but it is only known to the viewer that he has consented to marriage only because he needs someone to take care of his mother. Sleevachan, the very night of the marriage to overcome his fear of sharing his space with a young girl decides to get drunk and ends up disappointing his wife. Soon, in a few days, it gets apparent that he is purposefully avoiding her and Rincy without delay decides to confront him and settle the issue once and for all. And Sleeva, the conscientious man that he is, somehow gathers courage and decides to take his fear head-on. But he gets drunk somehow the very night his wife wanted to talk with him and under the influence of alcohol and some misleading advice by his friends, rapes her without his knowledge. How Sleeva realizes his mistake, grows up, and gets on good terms with his wife forms the rest of the story.

The best thing about KEM is how delicately almost all the characters are drawn, with each one of them, regardless of their nature and actions, remaining immensely likable to us throughout the entire span of the film. Sleeva, the hero even if he consents to marry only with an ulterior motive without even looking at the face of his bride, is presented only as a helpless chap with a heart and an ear for everyone around him. There is no toxicity in his actions and never once is he shown to lord over his wife or her family. When he finds out that he has physically assaulted his wife, there is only remorse on his part which he decides to express by immediately apologizing for it. Though he is prevented from doing so due to circumstances, he remains within the listening range of his wife and waits for the burns to heal. And when she, due to a misunderstanding, decides to call it quits, he immediately complies and agrees to separate peacefully.

Sleeva just like many other men of today’s generation born and brought up in a conservative environment that treats women either as hallowed property or just as slaves, is shown to be a typical victim of his circumstances. Even if he is a skillful farmer proficient enough to be an inventor and a do-gooder who loves serving his fraternity that has no reason to hate him, his inhibitions with regard to women manage to puncture his ego and plant seeds of inferiority complex within him. He has always considered himself for reasons unknown as someone who might be despicable to women and when his wife reveals her intention to break the relationship altogether, he takes it only as a confirmation of his worst fears.

Asif Ali is perfect as Sleevachan and brings the vulnerability in the character to the surface with a beautifully modulated performance. The rest of the cast led by Rincy played by Veena Nandakumar, fit nicely into the premise and contribute superbly to the narrative.

Even the peripheral characters are written with so much empathy and respect that they keep questioning our judgment about them like in the case of Sleeva’s shop in-charge Kunjambi (Basil Joseph) who is in love with a college girl. He initially appears like an immature kid infatuated with the girl he is in love with but in the second half, the way he turns into a guide for his employer is a pleasantly surprising development. And the confrontation with the girls’ parents that follow after he elopes with her are nicely written pieces of real, organic conversation that fully encapsulate the ‘issue’ the film tries to address.

Another nice thing about the writing in KEM is that the story is narrated completely from the perspective of Sleeva and just like him, we know nothing about what goes on inside Rincy’s mind almost throughout the film. It is only when Sleeva enters her house to spend a night there in the climax, we are allowed a look into her hitherto concealed personal space and start learning about her. It is very difficult usually to build conflict with only one perspective in place but KEM succeeds in doing so, similar to what we saw in the Nivin Pauly-starrer Om Shanti Oshana which was narrated completely from the perspective of the heroine. I have personally, always wanted to see a romantic movie split into two, with each portion narrating the same story from two different perspectives of the lead characters. I would really love to see a KEM Part two that is narrated purely from the perspective of the still-unknown, yet charming Rincy.