The Offence is structured over very few and very lengthy scenes that feature long conversations and arguments that make the characters crack and break out their innermost darkness. And yet these expansive moments are housed in a non-linear structure that reveals climaxes before they’ve been set up and throws itself back to previous scenes, really laying them out in the appropriate order.

Read other entries in this series: The Pawnbroker, Fail-Safe, The Hill, The Anderson Tapes 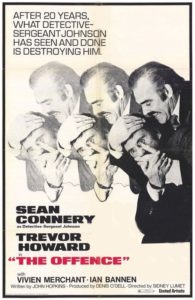 Sidney Lumet delved into a number of fairly troubling subject matters over his illustrious career, though he likely never tackled one more disturbing or distressing than in The Offence, where he exposed child sex abuse and police brutality so visibly. Sergeant Johnson (Sean Connery, in his third collaboration with Lumet) is a British police officer inspecting a recent surge of kidnapped and sexually abused girls, leading to the detainment of suspect Kenneth Baxter (Ian Bannen) which results in a brutal confrontation between the two men.

This film doesn’t shy away, but instead deeply examines the atrocities that police officers like Johnson witness on a regular basis, how it affects their psyche and their home-life, and how when confronted face-to-face with what seems like pure evil, these darker forces that have grown from within drastically take control. 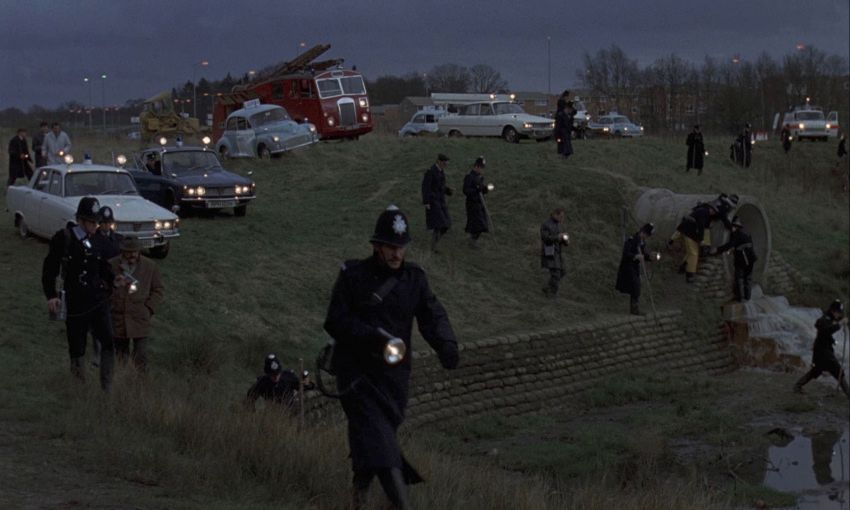 Based on the 1968 stage-play ‘The Story of Yours’ by John Hopkins (who also wrote this adaptation), the film makes quality use of staginess and cinematics. Remarkably similar to Lumet’s previous films like The Pawnbroker (1964) and The Hill (1966), The Offence is structured over very few and very lengthy scenes that feature long conversations and arguments that make the characters crack and break out their innermost darkness. And yet these expansive moments are housed in a non-linear structure that reveals climaxes before they’ve been set up and throws itself back to previous scenes, really laying them out in the appropriate order.

The eerie slo-mo opening scene, accompanied by the disorientating stretches of signal-noise, shows the major breaking point of the film – the aftermath of Johnson having beaten Baxter to unconsciousness. It then flashes back to a number of confrontingly long scenes leading up to Baxter’s arrest, including a truncated version of the two men alone as they square off, which will later be expended upon in the film’s last act. 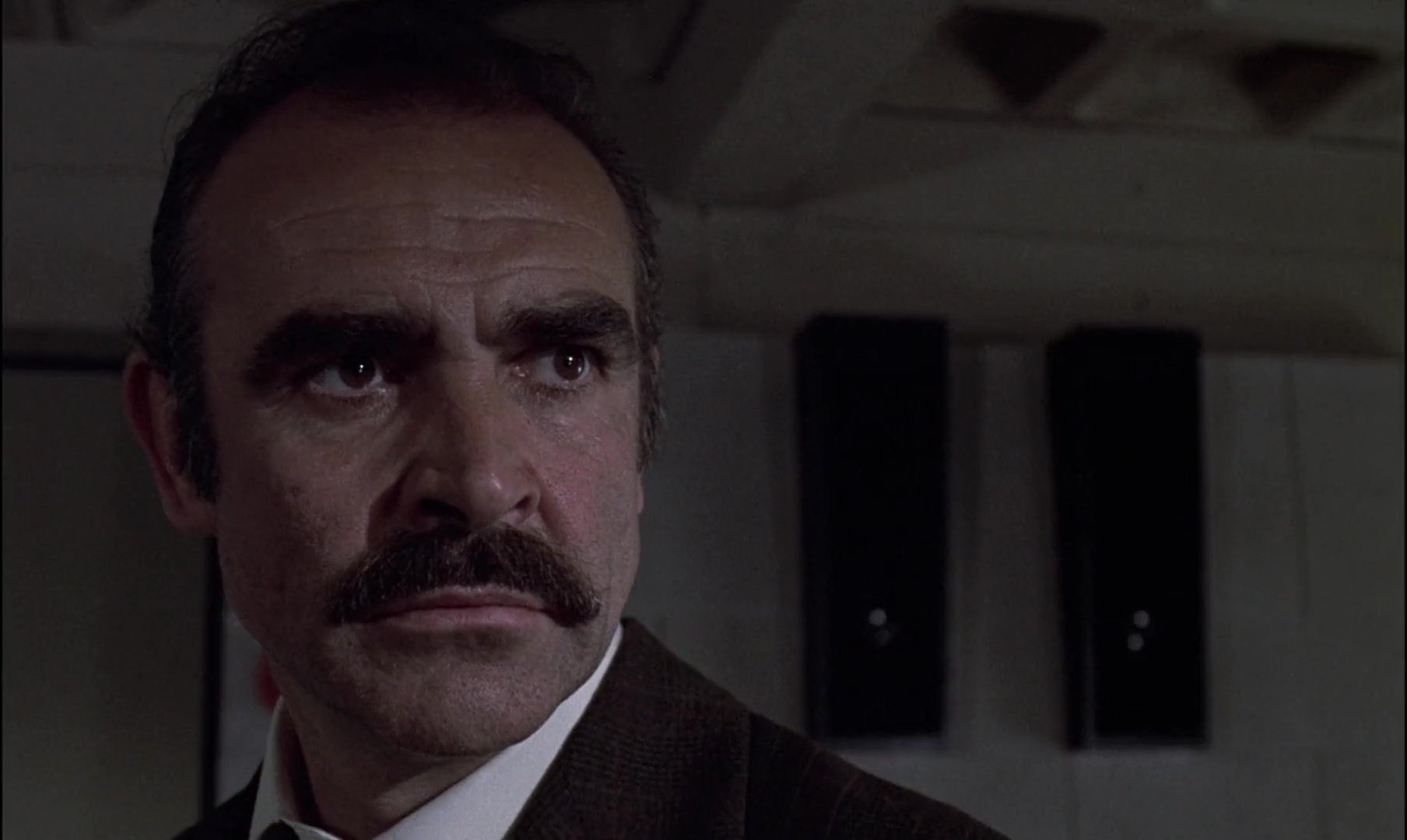 The two centrepiece sequences are the longest and most discomforting. The first involves Johnson coming home to his wife, Maureen (Vivien Merchant), after Baxter has been taken to hospital and Johnson has subsequently been suspended. If there’s ever been a more openly raw scene in a film portraying police PTSD, I’d like to see it. Connery is possibly at his career best in this film and especially in this scene, where he aggressively laments the psychological toll his work takes on him.

The second is the full version of Johnson’s interrogation-room encounter with Baxter. Whereas earlier we only saw the brutally violent aftermath, this time we are privy to the whole confrontation that they have – it’s a gruelling close to this already gruelling story, that conjure some troubling insinuations that Johnson may be more criminally minded than Baxter.

The acting from Connery and Barren is a masterclass in how two characters can unravel and expose each other – Baxter becomes even more powerful the more he is physically tormented by Johnson, and Johnson becomes even more vulnerable the more violent he becomes. 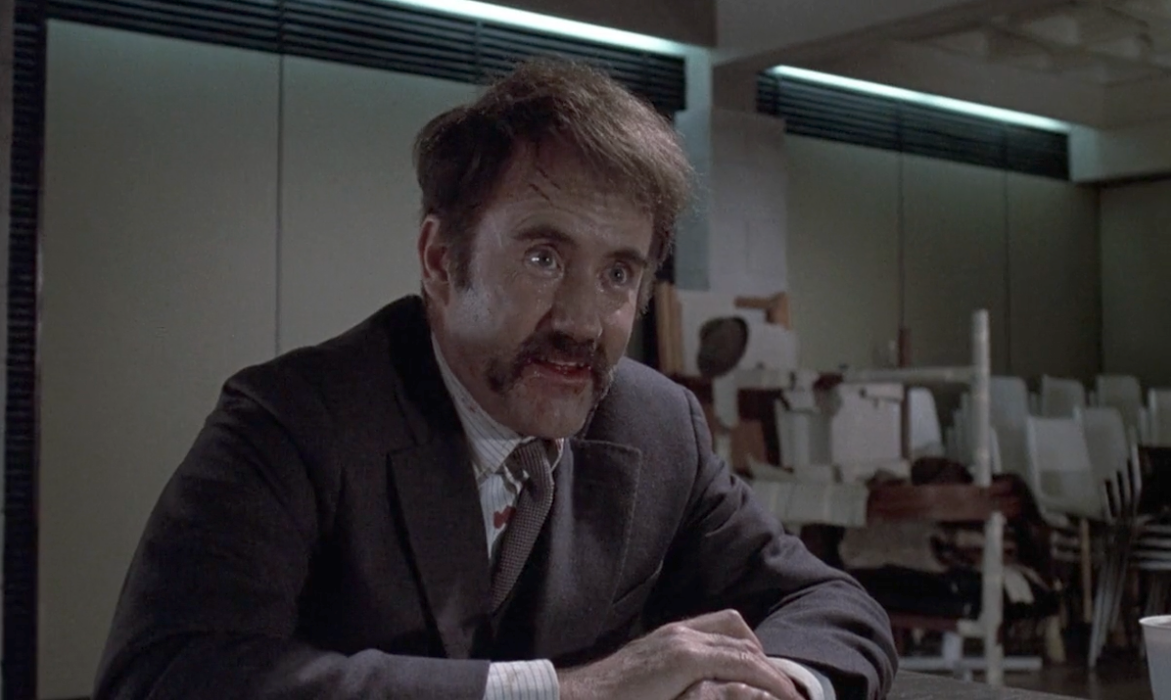 The Offence was unfortunately not a commercial success at all, failing to even be released in quite a few countries. But it was a passion project of Connery’s, who saw the play and was inspired to bring it to the big screen and act in the leading role, believing it would be another opportunity to prove himself as a dramatic powerhouse and break away a little from his James Bond character. He soon offered the directing role to who he thought could best adapt such a dark story and give it such an immensity: Sidney Lumet.

His prolific filmography has given the world at least four highly talked-about films (12 Angry Men, Serpico, Dog Day Afternoon, Network), but with 40 other films under his belt, why Lumet gets discussed so highly as a filmmaker needs to include references to a film like The Offence, where he got the best, yet the darkest from his actors, he placed the scenes in the right order to elicit the best reaction from the audience, and he relied little on music or overly-elaborate camera-work or editing, simply using his honed talents as a visual storyteller to let actors like Connery and Bannen bring Hopkin’s revealing script to horrific life.