Maali (2020), Ashwini Malik’s nuanced, brittle film on relationships and realization rises above the trope of a regular family drama. It brings in all the ingredients of a chamber piece drama, and then adds its own subtle twist to it. Minimalist in approach, Maali covers a vast field of spaces in a singular unit, towing a commentary about class consciousness and the spaces one chooses to inhabit, that never loses its narrative grip.

The film takes place in the span of a week, where a middle-aged couple’s getaway to a farmhouse away from their metropolitan surroundings leads them to the local gardener and caretaker named Gopal (Prabhat Raghunandan) who unearths deep-seated anguishes in their decade-old marriage.

T.K., ( Gaurav U.K. Sharma) is a ghostwriter who is writing about the sexual awakening of a woman and asks his wife Priya (Swati Sengupta) whenever he is unable to find what exactly he is trying to express. Priya is a housewife, who had left her job as an HR years ago when she was pregnant, and then went on to take care of their son who now studies in a boarding school. Priya dutifully attends to her husband and takes care of him. Then during the stay, Gopal asks her about her past and she begins to see things differently.

Similar to Maali (2020): 45 Years: An Explicit Relationship With Memories

So, the context of the book reflects the state of the wife? Then it leads up to a sexual awakening through the gardener? These questions might spring up immediately, but Maali is leagues ahead of these stereotypes and never succumbs to such amateurish narrative fantasies. Priya is secure of her sexuality in every sense of the term, and that is not the point of Malik’s story at all. What she is not secure of is her choice to stay with the person she calls her own. She questions T.K. why he didn’t allow her to continue with her job after she became a mother. She refuses to listen to him when he warns her not to visit the nursery with Gopal. “I’ll not be guided by you anymore,” she says, leaving her husband aghast.

In one particular sequence in Maali (2020) T.K. asks Gopal about his “jaat”, to which he replies “chamar”, and then goes on to instruct him to cook mutton for them, as if to show he is not bothered with his class at all. Priya casually stands beside her husband and faces down. 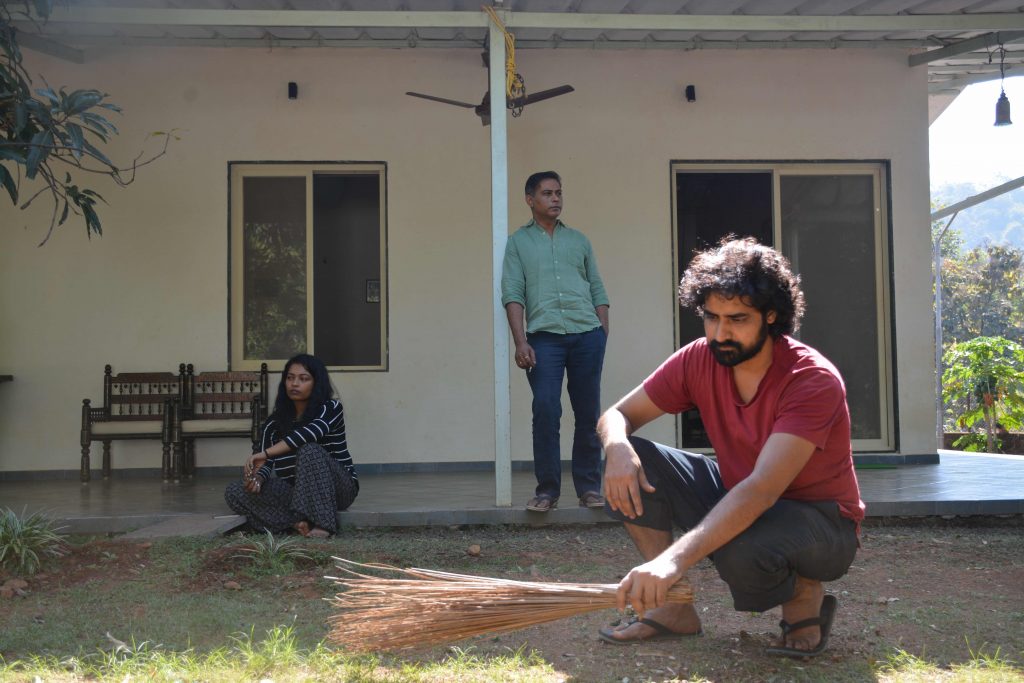 Maali (2020) plays out this gradual build-up of insecurity with time. Working with cinematographer Arun Verma, he keeps the camera stoic and non-interfering, where the characters converse and respond to each other without any narrative acceleration. There are long sequences, finely edited by Irene Dhar Malik where the two characters share their views and perspectives, and each such sequence becomes revelatory in unspooling the character a little bit more.

The absence of heavy background music works wonders, where Sanidhya Bohra’s keen ear to the natural sounds adds up to the temporal landscape of the film. By the time the first half of the film finishes, we might predict what is to arrive, and yet the second half feels resolutely fine, with a surprising amount of clarity and space to accommodate anxieties and meltdowns that fit in brilliantly.

The performances are uniformly good. Sengupta gets the meatier role and plays Priya with a lot of depth and confidence. Her performance is the key that unlocks the film in the tiniest of moments. Sharma is brilliant in navigating the shock, despair, and anger of a wronged husband and a regressive man, and manages to add loads of depth to a character that could have been easily categorized as unforgivable. But Maali belongs to Raghunandan.

From the way, he stoops while standing to his master to how he walks with his hands held behind his back, Prabhat Raghunandan is terrific. There’s a scene late in the film when we finally see Gopal in his shed beside the farmhouse when he is not occupied in his usual chores of digging the soil or watering the plants. Here he applies a deodorant on his body for the first time, shy and eager and trying, all palpable in Raghunandan’s frame, who speaks volumes without uttering a single word.

Maali (2020) is a small, tightly-knit experience. Malik’s control is superbly understated, and in a lot of ways reminded me of Andrew Haigh’s 45 Years, although the comparison is not fully there. Maali is wryly original in its exploration of interpersonal relationships and co-dependence, as much as it is aware of class and social standing in its own contemporary ground. It speaks with restraint and control and requires your unmitigated attention.

A Mermaid in Paris [2020]: 'Fantasia' Review - Somewhat fun but definitely all over the lace