Aakash Chhabra’s short film, Mintgumri, has a palpable thread to it, moving from a yearning to connect or reconnect freshly, restoring of an old dynamic to its suggested ephemerality, each step impressing on the viewer with a subtle, sharp stab of the most deeply and preciously felt emotion. The film carries this deceptive modesty of scope but Chhabra, within a span of barely twenty minutes, is able to peer into a challenging, complex gamut of human impulses, traversing that longing to do and care more to realizations that perhaps it is too late for you to respond because someone else has already fulfilled that position.

Raag (Lakhsvir Saran), who’s in his twenties and has just returned to his hometown in Punjab, lives with his father in a house separate from the one where his uncle and aunt stay with his grandparents. He goes over on a winter morning to pay his ailing grandfather one of those customary visits, who is mostly bedridden. The film abstains from the plot; it is more interested in capturing the internal doldrums and hesitations, all those things we want to express and hold back as we perceive a difference and grapple with the inevitable, with crystalline clarity and often uncomfortable authenticity.

It unfolds as a series of basic morning rituals and essential needs of Bauji’s which Raag helps him with. Raag wishes to aid, but his uncle and aunt, the primary caretakers of Bauji’s, would have it their way. When Raag does get an opportunity to attend to his grandfather, each gesture is so beautifully, attentively, minutely performed; the intimacy of the moments with a swell of warmth and affection belying them feel like they are the only things that matter, nothing else counts. However, strains of guilt, a shot at reconciliation, and the knottier feelings also course through this touch of care. 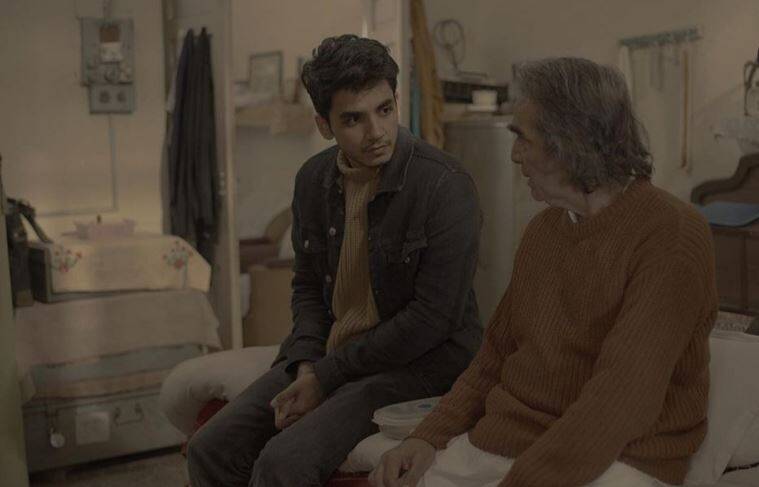 Raag seems to be recompensing for all lost attempts at a solid, steady friendship and bonding with his grandfather, which the passage of time has pilfered away, as he facilitates all of Bauji’s requisites. Unlike the others who are bound to their worn-out, inured repetitiveness of duty, Raag takes his time, asks Baoji which sweater he’d like to wear, and patiently waits till the latter decides on after considerable dawdling. As Raag helps Bauji put his white kurta on, straps the watch around his wrist, kneads his toes to fit into the shoes, the tenderness implicit in how it all is conducted is quietly redolent of their past closeness and trust, which got short shrift by reasons beyond the control of either.

Mintgumri avails of a very pared-down language in its design and conceit. In the film, the sparest of expression, held and captured just a little longer, lingeringly, and different inflections and varieties of gaze, shifting from the sincerity of Raag’s to Jhai Ji’s resigned sadness, articulate a painfully immediate, stingingly personal vocabulary of the dimensions and parameters of care, how individuals and relationships across generations are undergirded and circumscribed by its definitive deliberations.

We watch how Jhai Ji’s face falls, drooping in recognition of the exhaustingly familiar routine of frailty and inability that governs the household when even the delight of talking to her grandson over a peaceful cup of tea is snatched as he is beckoned to look after Bauji. Jhai Ji recounts anecdotes of her husband’s stubbornness and wickedness which hasn’t waned a dint despite his ailment but that too is on borrowed time. Bauji’s needs will crop up; his ailment is the orbit on which everyone in the house runs, trying to administer as best as they can. Raag’s uncle is who Bauji depends on the most; his departure makes him anxious, fearful of abandonment, and he does not really let him stay away for long, demanding the reassuring safety of his proximity. 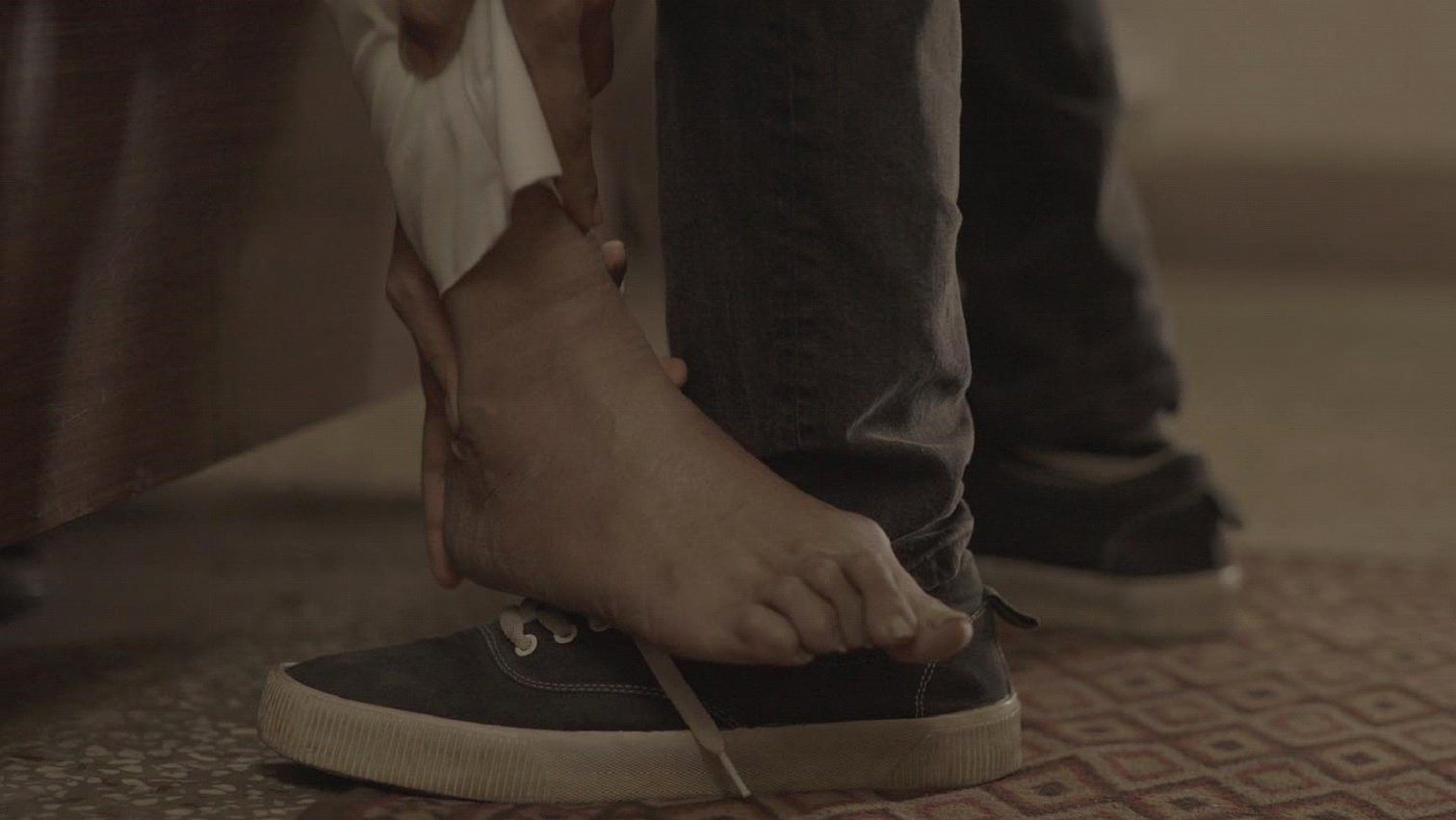 In the film’s final clutch of poignantly striking shots, we are made more easily privy to the innermost perspectives that both Raag and Jhai Ji harbor. With just a couple of shots and expressions, both are revealed as being kept at bay, shielded from the nitty-gritties of Bauji’s rigmarole of necessities, separately located but united almost in their common position and role. DoP Sukhaan Saar chooses to work with a lot of close-ups and tight medium shots, as each expression, innocent and sweet and the flitting in variant registers and tenors ranging from anticipation to a crestfallenness, finds itself amid tentativeness, a memorable shot being intertwined feet in a moment of support.

The film naturally stands on the most moving synergy and exchange of purest emotion and sublime communication, mostly non-verbal, between its superb leads, Uday Chandra and Lakshvir Saran. Both bring this kind of almost shimmering honesty in their performances. Chandra does these slight bobs of his head in certain scenes which demonstrates his unerring eye for accuracy. When he worriedly turns to look at his son who is leaving for some work, Chandra uses his entire face, each muscle of it, to situate a simultaneity of trepidations. He knows of his sheer helplessness without his son. When Raag applies cream on Bauji’s face, caresses him, combs his hair meticulously, and the latter playfully tugs and nudges on Raag’s hair and the faint outline of beard, it is so charming you’d be instantly reduced to the broadest of smiles.

Related to Mintgumri – Underrated Netflix Gems to Check Out

These scenes are also edited with smart proportions of patience, the most accepted attribute in such circumstances, and discerning ability to tie them up with the larger understanding the film has to offer. Saran, who has a placid calming energy to him as Meel Patthar had displayed in heaps, is gifted with an obvious inherent likeability but he also lands some serenely devastating moments as Raag, framed through window curlicues, is ultimately hit by an acknowledgment of where he truly stands vis-a-vis his relationship to his grandfather and how much he can actually do and what he cannot overreach into.

Mintgumri is so lovingly crafted with wonderfully lived-in textures that you’d feel both buoyed in its lighter moments and unbearably, effusively moved as certain truths of the situation arrive, unconcealed and with severity.