Time and again Hollywood has explored the theme of television’s superficiality and deception. In Sidney Lumet’s Network (1976), an agitated broadcaster screams at his viewers, “This is mass madness, you maniacs! In God’s name, you people are the real thing! WE are the illusion!”. In Peter Weir’s Truman Show (1998), an overbearing TV mogul remark, “We accept the reality of the world with which we’re presented. It’s as simple as that”. Many consider it ironic that Hollywood is lamenting about the alienation boosted by pop culture that’s exemplified by the inherently tawdry television medium because Hollywood in itself is constantly presenting iridiscent, contrived images to distort people’s perception of the real which is already warped under individual prejudices. Nevertheless, some Hollywood films’ depiction of topsy-turvy & shallow television world has exhibited strong commitment to truth-telling. Robert Redford’s fascinating and meticulously crafted Quiz Show (1994) is one such determined showcase of TV’s moral corruption and duplicity that also doubles up as a insightful commentary on 50s America.

In Quiz Show, director/actor Robert Redford equates an ethically compromised TV show with white American public’s ‘loss of innocence’. While Vietnam War, 1963 assassination of President John F. Kennedy, and Watergate Scandal were suggested to have led to the radicalism in 1960s American politics, Redford finds seeds of disaffection and deceit in a rigged quiz show. The film is a dramatized version of the compelling and morally complex true story involving a sensational NBC game show, Twenty One. Redford introduces us the show through its exulted viewers – from nuns to suburban families – looking up to TV as if it’s the altar. 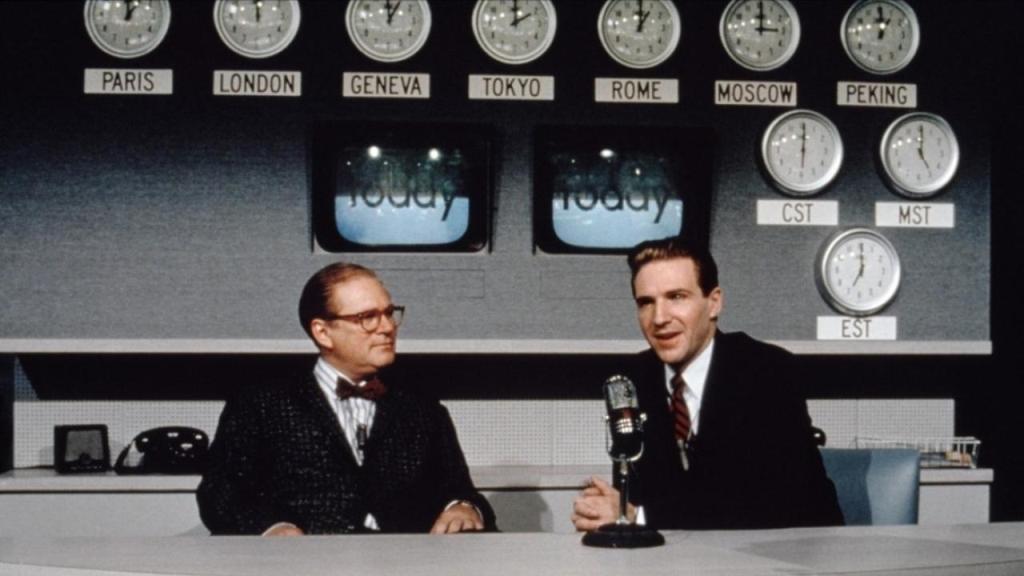 It is 1958 and Herbert Stempel (John Turturo), a geeky Jew, is the reigning champion of Twenty One. The set-up for this Geritol-sponsored quiz show is simple: Two contestants are locked inside two soundproof cells, and then the game host asks questions that demand encyclopedic knowledge. The contestant who reaches the 21 point mark first wins the game. But very early we know some shoddy thing is unfolding behind-the-screens when the program’s sponsor (Martin Scorsese) calls producer Dan Enright (David Paymer).

Since the reigning champion Stempel has already peaked in popularity, evident with the unprecedented ratings, the showrunners feel it’s time for a change. Dan Enright has already found a right replacement: Charles Van Doren (Ralph Fiennes), scion of a true blue-blooded literary family. Father Mark Van Doren’s (Paul Scofield) phenomenal success – as a Pulitzer-winning poet – certainly intimidates Charles who is just an instructor in a prestigious university. Meanwhile, the whole nature of the show is revealed in a dinner talk between Stempel and Enright. The showrunner asks Stempel to ‘take a dive’, promising him a panel show for the sacrifice. Immediately after Charles becomes the new champion (through a smart deception), we learn everything about the show is a lie. The contestants are given the questions prior to the show and every showcase of emotion is the result of elaborate rehearsals.

Interestingly, Charles Van Doren becomes the most popular contestant of the show, ‘winning’ the game week after week. Charles feels he has escaped his father’s shadow and public believes him to be a bonafide intellectual. He even appears on Time magazine cover, which irks Stempel so as to appear before a grand jury. But the judge seals Stempel’s testimony on the grounds that he is mentally unbalanced. However, the news of a sealed testimony on a quiz show catches the attention of self-righteous congressional investigator, Richard Goodwin (Rob Morrow).

Goodwin launches his own investigation on Twenty One and beyond reasonable doubt finds that the show is fixed. But at the same time he develops a tenuous friendship with Charles and does his best to spare the guy from humiliation. Goodwin repeatedly says ‘he is out to get the TV, not the contestants’. The congressional hearing naturally goes the opposite way, marring Goodwin’s motivations and ambitions.

The biggest strength of Quiz Show is Paul Attanasio’s script, based on Goodwin’s memoir “Remembering America: A Voice from the Sixties”. The writing elegantly moves in and out of the three men’s lives, highlighting how a simple, fixed game show changes their lives forever. Turturo as usual does a marvelous job in playing a self-hating outcast. Fiennes, fresh from playing the monstrous Amon Goeth in Schindler’s List, takes over a role that’s exactly opposite. Fiennes’ Charles is a frustrated young man with fine sense of morality.

Despite the way Charles kowtows to the fame of ’15-minute variety’, Fiennes eventually makes us sympathize for Charles. Rob Morrow was also good at getting at the insecurities and bias of Goodwin which lies beneath the guy’s righteous indignation. Veteran actor Paul Scofield does a brilliant job in playing Charles’ father who is alternately disappointed and proud of his son. David Paymer and Hank Azaria were perfect as the wily show producers. Furthermore, director Scorsese was surprisingly great in his cameo.

Quiz Show is a good example of an engrossing drama which doesn’t lose its focus on both the human dimensions and social plus cultural commentary. The film tells something memorable about duplicity promoted by the contrived images, for the sake of corporate America’s well being. Although on the outset, the harm of a rigged game show doesn’t look that dangerous, Redford intimately observes the adverse impact of such sophisticated fakery on an individual and society.

Moreover, the director regards this little scandal as one of the many events that set a precedent for the 60s paranoia and cynicism among American public. The best moments in Quiz Show are clearly the emotionally charged exchanges between the individuals; I loved Charles’ conversation with his father Mark while sharing a piece of cake in the kitchen. Commentaries on ethnic and class conflicts are also cleverly infused into the proceedings, the most fascinating moment being Goodwin questioned by his perceptive wife (Mira Sorvino) on why he wants to spare Charles in his investigation.

'The Card Counter' Offers A Return To Golden-Age Gambling Movies