There are certain professions when looked through the cinematic lens would ideally come across as respectable, righteous, and valorous. The police profession is one such thing. They are often dramatized as the final barriers preventing chaos in the society. Tamil cinema, in particular, has a long history in portraying police as our saviors. Their extrajudicial punishments and killings have been lionized as instant justice. Comical scenes have been created out of custodial violence. But something has changed over the years in Tamil filmmaker’s portrayal of police.  While films like Vazhakku Enn 18/9 (2012), Visaranai (2016), and the recent Jai Bhim (2021) looked at the victimization of the marginalized by the police force, Franklin Jacob’s Writer (2021) provided a fascinating insider’s account of the system’s rottenness. Debutant filmmaker Tamizh’s Taanakkaran (2022) is another fine addition to this growing list of Tamil movies on this malevolent institution.

Writer/director Tamizh is a former associate of Vetrimaaran and that shows in some of the storytelling choices (he has also acted in Asuran and Jai Bhim). Both in terms of writing and making, Taanakkaran has its flaws since the filmmaker follows certain prerequisites to fit the narrative into a commercial cinema format. However, to a large extent, Taanakkaran is engrossing and doesn’t sacrifice its core complexity to provide pat answers. The narrative begins with an animated prologue explaining how and why the Indian police force came into existence.  The British colonizers employed local inhabitants to police their empire as well as to quell the insurgency. Almost all the rigid hierarchies within the police force were established by the British regime.

Despite the declaration of independence in 1947, the Indian police system remains unreformed in many ways as the colonizers were replaced by ruling parties. It could be argued that it has only become worse since the nexus of caste-class and power is a more incendiary combination. The lingering effects of the colonial set-up can also be felt in our judiciary and educational system. Of course, the privileged, the brainwashed, and the ruling class never miss an opportunity to cry at the little yet pivotal social reforms that were brought upon after decades of painful struggle.

Taanakkaran is almost entirely set within a 1998 police training camp. It touches upon the rigorous, combative, and outdated practices which sift through the recruits to find the subservient and inhumane bunch for the service, instead of doing the exact opposite. Vikram Prabhu plays Arivu, a determined a young man with a M.A. in criminology. He joins the Police Recruits School (PRS) to become a police officer. The PRS campus is situated in a barren and hellish landscape in the middle of nowhere. Soon Arivu and his fellow recruits understand that the blistering heat is the least of their problems.

PRS is naturally a microcosm of the so-called civil society. The new recruits are separated into squads, psychological pressure is systematically injected, unjust punishments are unleashed to create further rift between the recruits, internecine strife is promoted, and eventually obedience without any question is demanded. Furthermore, resistance is uprooted with greater application of force. Lal plays Eashwaramurthi, a ruthless training officer in cahoots with a corrupt inspector named Muthupandi (Madhusudhan Rao). They use parade training as an excuse to weed out the undesirable candidates, particularly the rebellious ones like Arivu, who clearly sees through the casteist, crooked schemes of the institution.

There are also good cops and they bring little hope to this atmosphere of unabashed cruelty. M.S. Bhaskar and Bose Venkat play these honest policemen, who are duly punished for that. The foremost strength of Taanakkaran is imparting a sense of realism to the setting. The functioning of PRS and its hierarchies within are established in a convincing manner. Vikram Prabhu is not an actor with a great range of emotions. But he plays to his strengths as Arivu, offering a largely engaging low-key performance. In fact, the film is blessed with a fine ensemble cast whose performances rise above their archetypal characterizations.

Regarding the flaws, let’s start with the movie’s minor one. Why can’t a Tamil protagonist exist in a narrative without a possible love interest? Maybe in order to dissipate the tense atmosphere of aggressive masculinity, a light-hearted femininity in the form of a slender romantic subplot is necessary for the audience? But the writing is annoyingly predictable and bland in these portions. 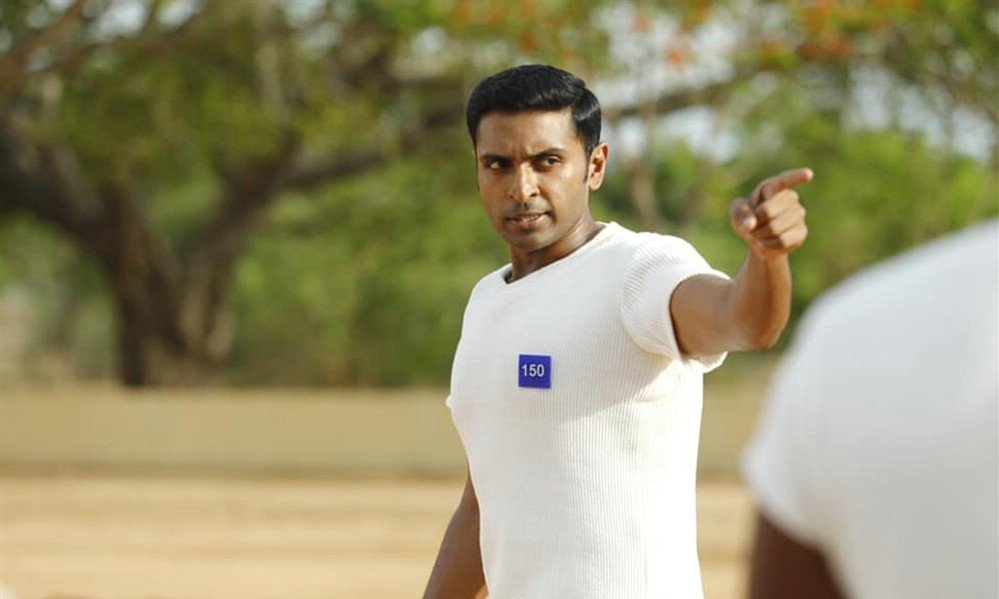 The bounds of realism become looser whenever writer/director Tamizh uses familiar dramatic set-ups to forward the narrative. This is the chief flaw in the narrative. Films like Taanakkaran that deal with a unique subject should try to build its drama in a better and nuanced manner. Filmmakers often make this mistake of outlining the marginalized characters only through their social identity and then through their humiliation and death. At best, they become torch-bearers of an ideology, and in the worst-case scenario, they are turned into a corpse to evoke our sympathy. The deaths of the older recruits and the death of Arivu’s father (Livingston) only strives to tug at our heartstrings, while the film itself acknowledges that the issue is more complex to be simplified inside the confines of a melodrama.

The writing and staging in these portions attempt to achieve easy emotional engagement whereas the thesis statement offers something different. Such narrative bipolarity is the issue with most of mainstream Tamil cinema that takes upon bigger sociopolitical conflicts. Of course, one could argue that coercing viewers through sorrow and sentimentality is a method to take the problem to an average viewer. It’s not that Mr. Tamizh would be ignorant to see through the flaws in such narrative set-ups. And it’s my humble opinion that pre-packaged emotions and stock characters deny depth where it’s needed the most. Tamil filmmakers should also learn to control their music directors. As usual the background music here adds to the emotional exploitation or overly amplifies the emotions. Yet, Taanakkaran doesn’t wholly derail its narrative to chase after antagonists and defeat them. It allows the protagonist’s plans to fail and hints that there would be more failure and agony in his path.

Taanakkaran is now streaming on Hotstar