Home»Reviews»Films This Week»The Blazing World [2021] Review: An Unexciting Journey Into A Cold World
Films This Week/Reviews/VOD

The horror genre has been a comfortable avenue for a number of filmmakers, especially independent ones, in an attempt to establish themselves. In the last two decades, the prevalence only became stronger as you would find that a number of acclaimed horror films were debut or sophomore features of their creators. The genre is bankable because it knows what it wants to serve to its audience and the audience knows what it can anticipate. And the feather on the cap would be the window for experimentation horror as a film genre provides to the artists who have ideas blossoming in their heads for which they don’t want to settle with a creative compromise while procuring relevant resources from the investors. In the light of the aforementioned facts, it is not surprising that an established actor like Carlson Young chooses to debut as a filmmaker (The Blazing World) via this genre. And it would be disingenuous to not mention that she does have a few ideas to bank upon, irrespective of how they come out to be when rendered visually.

The Blazing World is a strange film. It conveniently chooses a tropical template to build a screenplay but starts defying the same for the creation of a fantasy realm to function within. The very unsettling Grady twins trope is introduced to create a certain discomfort but also establish how parental negligence can lead to trauma. Conveniently, one of the sisters dies while the parents scream at each other. A number of plot elements are introduced in the opening sequences ranging from a black crow to fireflies, which don’t get utilized to the film’s benefit. 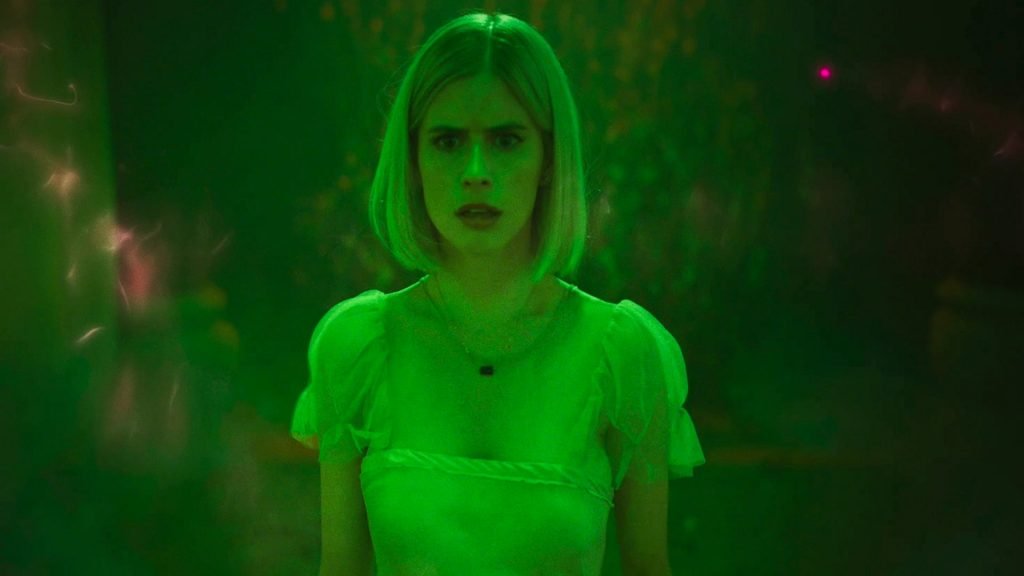 The plot is quite simple. A woman, Margaret Winter played by Carlson Young, struggling with the loss of her sister due to her parent’s negligence and her own distraction. At the same time, she has not yet accepted the death. She is a broken soul from a broken family striving through a broken dimension. To reclaim peace of mind, she begins a journey into the dimension between life and death where her sister is presumably stuck in a Schrodinger cat state.

Once you enter the fantasy realm, possibly anything can happen without logical constraints. The issue here is that wild ideas only exist in a vacuum and they have no possible outreaching metaphors associated with them, making it rather tough for the audience to develop connection or care for whatever happens with the story or the character(s).
The Blazing World is devoid of exciting performances. The only intriguing act comes from Dermot Mulroney as Tom Winter, Margaret’s alcoholic father, but alas, the majority of screen time is captured by Carlson who gives an incoherent performance herself as the protagonist. She falls flat in a number of key sequences and in others, she is serviceable at best. It would have been a different film altogether had she focused solely on the direction with someone else playing the role of the protagonist. It might sound too strong an opinion but this certainly was a huge mistake in casting. I am personally not a fan of directors playing the protagonists themselves anyway.

Related to ‘The Blazing World’ – More than Blood and Guts: Symbolism in Horror

The filmmaker’s vision gets coincidental with the vision of the actor playing the lead when both agents are the same and the need to develop a strong film with fully fleshed-out characters starts to dominate the actor’s process of building a liberated protagonist. In simple words, what seems to happen is that a director who plays the protagonist appears to be working to smoothen out the screenplay for other characters to do their job skillfully. They get so obsessed with the intention to secure a synergy between characters, as a director, that their role as an actor gets compromised and their own performance gets punctured at worst and manageable at best. That’s just my personal observation which warrants a greater discourse.

The noticeable positive of this film would be the non-VFX visuals thanks to the controlled cinematography by Shane F. Kelly, who chooses strong color palettes and shot compositions. I am not impressed with the graphics here for they feel cosmetic and operatic like you would have on stage. I am not even sure if a lot of it was required because there are stronger alternatives in terms of practical effects.

The Blazing World, which had its world premiere at Sundance Film Festival, is a disappointing horror fantasy that cannot be pitched to an audience. But given it’s only the debut of a filmmaker, one cannot disregard the fact that Young comes with her set of ideas that will come out better the next time.