I feel that Uli Edel’s The Baader Meinhof Complex (2008) and Koji Wakamatsu’s United Red Army (Jitsuroku Rengo Sekigun: Asama sanso e no michi, 2007) are significant films to provide a closer understanding of modern terrorism, provoked as well as extinguished by State’s formidable power. Both films focuses on the beginning of the age of global terror, set amidst the turbulent cold-war times, and flourished due to State’s fascist tendencies and unchecked police brutality. In fact, the 1960s and 1970s were the most tumultuous decades in modern history where both people’s revolution and nuclear holocaust seemed palpable. But capitalism and political hegemony outlasted every revolutionary dream, pulling us into the age of disaster capitalism with the resurgence of neoliberal plague. At the same time, the radical left either lost itself to ideological craze or metamorphosed to accustom itself to the reconfigured political landscape.

United Red Army and Baader Meinhof Complex brilliantly track down the intense radicalization of left-wing factions that lost itself to fanaticism and nihilistic violence. Though the state-sponsored terrorism led to the emergence of such groups, the dehumanization as a result of ideological extremism eventually helped the state to clamp down the opposition and maintain the status quo. It presents us an interesting paradox: how the glorified combatants of terrorism are themselves the abettors. The biggest casualty happens to be the lost generation of idealistic youngsters, victimized by extremist fervor as well as the oppressive state. In United Red Army, veteran film-maker Koji Wakamatsu offers a raw portrait of this lost generation through aesthetic and narrative mechanism that’s simple yet concise. 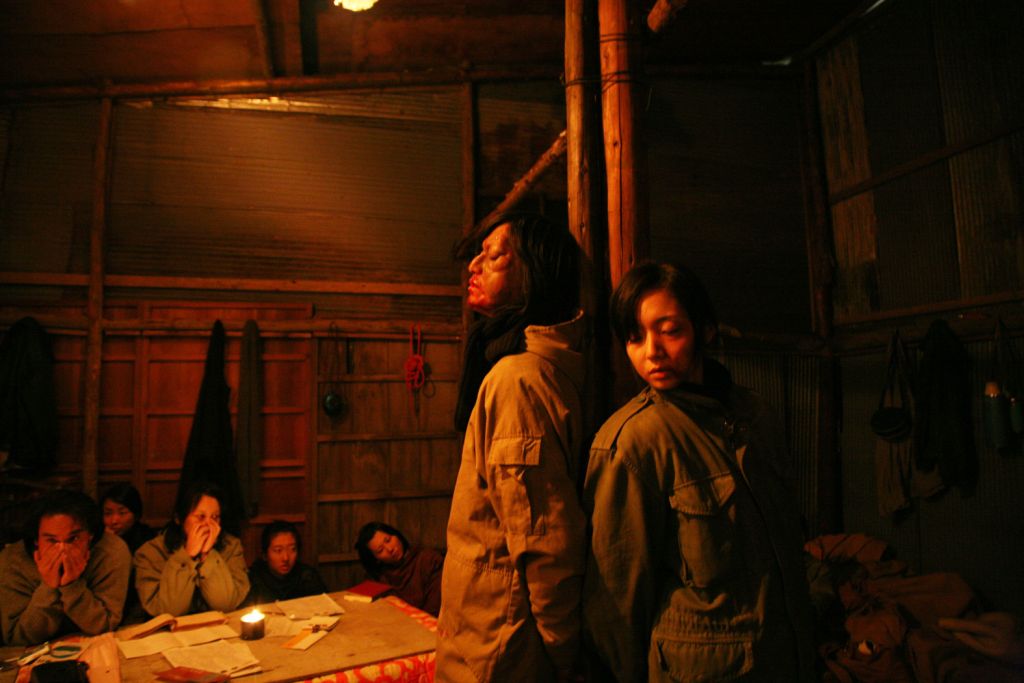 The prolonged introductory section of United Red Army, bestows upon us the encyclopedia’s worth of details – extracted from archival footage and documents spelling out the dates, years, and events – to comprehend the political and social background that led to the formation of URA in Japan in July 1971. It started with Japanese student protests in the early 1960s against dormitory reform, rising tuition, and most importantly the US-Japan Security Treaty. The state’s crackdown and the internecine battles within leftist organizations led to the formation of various militant student organizations. Notorious among them were Japanese Red Army and the Revolutionary Left Faction – dissenters from the Communist party – which eventually came together to form the United Red Army (URA).

Related to United Red Army: The Endless Trench [2019] Netflix Review – An Incredible Drama on the Living Ghosts of Francoist Spain

The members of the group transplanted themselves to remote mountain cabins in order to receive paramilitary training. However, under the authoritative leadership of Red Army faction leader Mori Tsuneo and leader of Revolutionary Left faction Nagata Hiroko, the group self-destroyed itself. Isolated from the outside world, the URA youngsters were compelled to go through inane ideological-cleansing drills which gradually turned sinister eventually costing them their lives. The leadership often conducted vague ‘self-critique’ sessions with an intention to root out ideological infractions and to embody the so-called communist consciousness. But the particulars of ‘self-critique’ got increasingly muddled and everything from wearing make-up to speaking one’s mind becomes a ‘threat’ to the revolutionary spirit. The result was the death of 15 student radicals, mostly under the age of 24.

While the first-half of Wakamatsu’s United Red Army dedicates itself to provide the expansive history of geopolitics and student protests in Japan, and the second-half reflects on the brutal self-destruction of URA, the third-half of the narrative focuses on the infamous 1972 Asama-Sanso incident. Five frustrated and displaced members of URA, running from the law, entered a mountain lodge near Karuizawa in Nagano Prefecture and took a hostage in February 1972. At the end of the 9-day siege the URA radicals were captured alive and the hostage was rescued. Though the police-side of the siege was widely publicized in Japanese TV channels during the time, Wakamatsu maintains the claustrophobic chamber-piece quality during this final part too by strictly directing his camera on the five URA members. The end credits scroll, briefly chronicles URA’s activities after 1972: from hijackings in Middle-East to the members’ escape to North Korea and Palestine.

The film’s financial limitations might be one of the reasons for its pared-down style. But director Wakamatsu uses that to his advantage; the natural light sources, long-takes, and hand-held camera techniques bring a more sober approach to the material that’s totally devoid of revolutionary romanticism. The pace though keeps decelerating, the heavy claustrophobic effect generated in the second and third sections of the narrative puts us in the shoes of the characters’ disturbed state of mind.  The incidents set inside the isolated mountain cabin is particularly brutal as the seemingly endless and absurd sessions of ‘self-criticism’ is excruciating to watch. The plight of Mieko Toyama (brilliantly played by Maki Sakai) is the most sorrowful, since she is solely persecuted for her youthful impulses.

The crude realism also works magic in the third-section set in the mountain lodge. The voice of police and the five URA men’s family members are only heard through loudspeakers. It kind of suggests how the warm memories of the past and grim inevitability of the future aren’t enough to break down the barriers built by harmful ideological indoctrination. “We lacked courage!”, a URA member shouts in the final shots of the narrative which pretty much sums up how Wakamatsu’s generation fumbled with the chance for revolution and reform. Led by sociopaths and paranoids who saw enemies everywhere, Wakamatsu’s film eventually remains as a microcosm of everything that’s amiss with left-wing radicalism.

United Red Army was based on Masayuki Kakegawa’s novel who also helped Wakamatsu in writing the screenplay. But it wasn’t just an adaptation of a novel since the narrative also instills the director’s own personal recollections. Since Wakamatsu was friends with many URA members, the film comes across as a ‘not-so-easy-to-dismiss’ insider’s perspective. In 1971, Wakamatsu and Masao Adachi, a documentarian as well as Japanese Red Army member, traveled to Beirut, Lebanon to make a documentary (‘PFLP: Declaration of War’) on the everyday activities of Palestinian freedom fighters and refugees. In fact, Koji Wakamatsu was one of the visually extreme film-makers of the 1960s who entered into film-making through domestic soft-core industry (pink films). His films are known for engaging with problematic subjects, exploitative violence and pornography.

Even though Wakamatsu lacked the artistic sensibilities of the other radical left New Wave film-makers – namely Imamura, Oshima, and Yoshide – his guerilla-style film-making and furious expressionism are intriguing to behold. Secrets Behind the Wall (1965) and Go Go Second-Time Virgin (1969) are even though labeled as pink films, was known for its eclectic mix of avant-garde aesthetics and provocative themes. United Red Army was Wakamatsu’s more focused and tightly constructed work which absorbingly creates an atmosphere of a time with little resources. It’s a studious and incredibly political docu-drama that’s doesn’t feel longer at all (190 minutes!). It strongly emphasizes on the futility of ideologically-driven militancy that gives precedence to dogma over humanity. How many more youths are going to be sacrificed in the altar of blood-sucking ideology and relentlessly oppressive State?