Christopher Winterbauer’s feature film Wyrm speaks in a kind of language every syllable of which manifests an obscenely cruel truth— a kind of truth which we often can feel throbbing in our hearts with a deafening intensity, yet we are too scared to acknowledge its existence. Wyrm is a silent yet bold plea made on the cusp of a mental breakdown— it’s a plea for human understanding, it’s a plea for cessation of violence brought about by an obtrusive societal regime that controls human thoughts and emotions, it’s— in simple terms— a plea for peace.

Wyrm, a perfectly normal, perfectly adequate, perfectly sane ninth grader is found guilty of being human. Among his many seemingly unpardonable sins one is that he could not live up to a school mandate which required every child to indulge in certain physical acts of affection like kissing and sex. His “inability” to sell off his childhood to appease his teachers hangs heavily on him.

Winterbauer is playing with our minds on a variety of levels. And, it is thus that a seemingly coming-of-age story feels like a vital insight into the human condition. For one, he has chosen certain props. He has chosen an electronic collar that every child who has not kissed a potentially romantic partner has to keep on wearing until he finds someone. The use of the collar is a form of art that is striving to tell the truth in the most blatant of ways— it shows how ridiculous our lives have become. Winterbauer wants to present reality— an alternative version of our 90s— which is surely our own reality but only in a different form. He wishes us to acknowledge that the ludicrous nature of the reality he depicts through his film is the reality of the present world.

The film is set against the backdrop of loss, of death. Wyrm and Myercella are twins who have recently lost their elder brother in an accident. Wyrm is in the process of recording through his cassette recorder thoughts of various people about his brother. He plans to play it at his brother’s memorial service ceremony. This recording happens throughout the movie and what transpires, in the end, is poetry. The thoughts that Wyrm collects from other people come together to rebel against a kind of narrative his school, and the other adults of his life propagated— a kind of narrative that silences every voice of freedom. 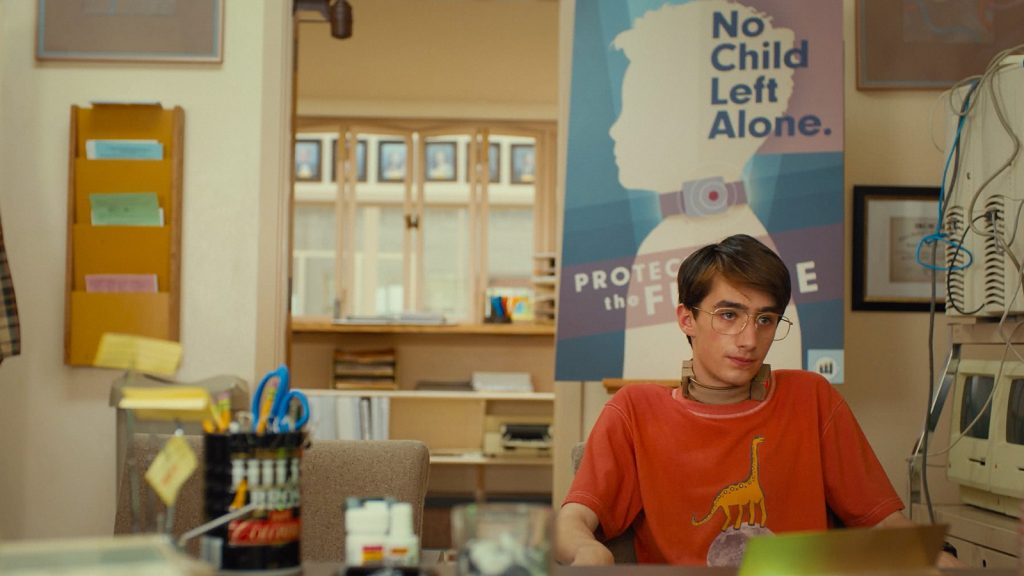 His brother’s death has driven his father to take what seems like a permanent refuge in the bathroom and has led his mother to run off in her car to trek in the mountains. Wyrm and his sister Myrcella are looked after by their uncle and his Spanish girlfriend who speaks no English. The death of their brother, the aloofness of their parents, and all the worldly influences pressing on them– all come together to plant them in a world that is very much like the world we see around us, but it’s Winterbauer’s representation of reality that brings us closer to our sorrows, to all our absurdities.

Every laugh the film generates is nuanced— it’s a kind of laugh that comes after full realization of our joys and sorrows alike. It’s not a semi-aware laugh of a drunkard that the film evokes, rather it evokes a laugh that is more sublime, more whole, more attuned to our reality just the way it is.

The film deals primarily with “communication”— people are on the internet (which is nothing but a bright computer screen) and they are typing away furiously and mindlessly. But communication is limited, the whole ecosystem is of an uncouth silence. The world the adults have created for the kids is depositing in their minds the debris of a flawed generation. The relationships they are thus forming with themselves, with their peers, and with the adults are thus fraught with distrust and hatred. Amid all this Wyrm tries to capture the essence of all these conversations through his cassette recorder— he captures everything as it is.

He thus engages in a communication that is more inclusive. When he plays his compiled tribute to his brother, in the end, he, unaware perhaps, brings the school together into love, into caring, albeit temporarily. The film works because it is open-ended yet complete. Throughout an attempt is being made to capture the beauty in seemingly ugly situations. It gives hope but very discreetly. It doesn’t promise hope. It defines a new hope— a hope that’s painted over all our despairs. A hope we don’t even know exists.

Winterbauer through his art has discovered life— like all great art does. Wyrm’s favorite color is blue and Wyrm feels he has no friends. It’s a very popular story, I’d say. But, there lies the beauty. Winterbauer wanted not to design something extraordinary— at least as far as the plot goes. What’s extraordinary is how the ordinary comes alive.

Lift [2022]: 'Tribeca' Review – Inspiring Journeys from the Homeless Shelter to the Ballet Stage