If variety is the spice of life then Shoojit Sircar is one of the spiciest filmmakers of India. With a career spanning over almost sixteen years, Sircar has directed films whose subjects vary one from the other and has created a body of work of distinct range and richness. The defining characteristic of these films is their uncompromising story, which creates a world of fallible yet believable characters. This is because he strikes a carefully judged balance between form and content. He does not let one part override the other.

His style of filmmaking adheres to the genre of meaningful cinema and has forged a path that works in tandem with the demands of the mainstream film Industry and artistic finesses. Even though his films are made within the domain of Bollywood films, they are devoid of hyperbolic melodramatic tropes.

The treatment of his films focuses equally on external presentations of emotion as well as character depth and interiority. His cinematic acumen lies in bringing out dramatic spells in ordinary moments converting them into a moment of cinematic simplicity matched with remarkable directorial control. He is one of the very few filmmakers working in the Hindi film Industry who emphasizes the content and technical aspects of his films in equal measure. 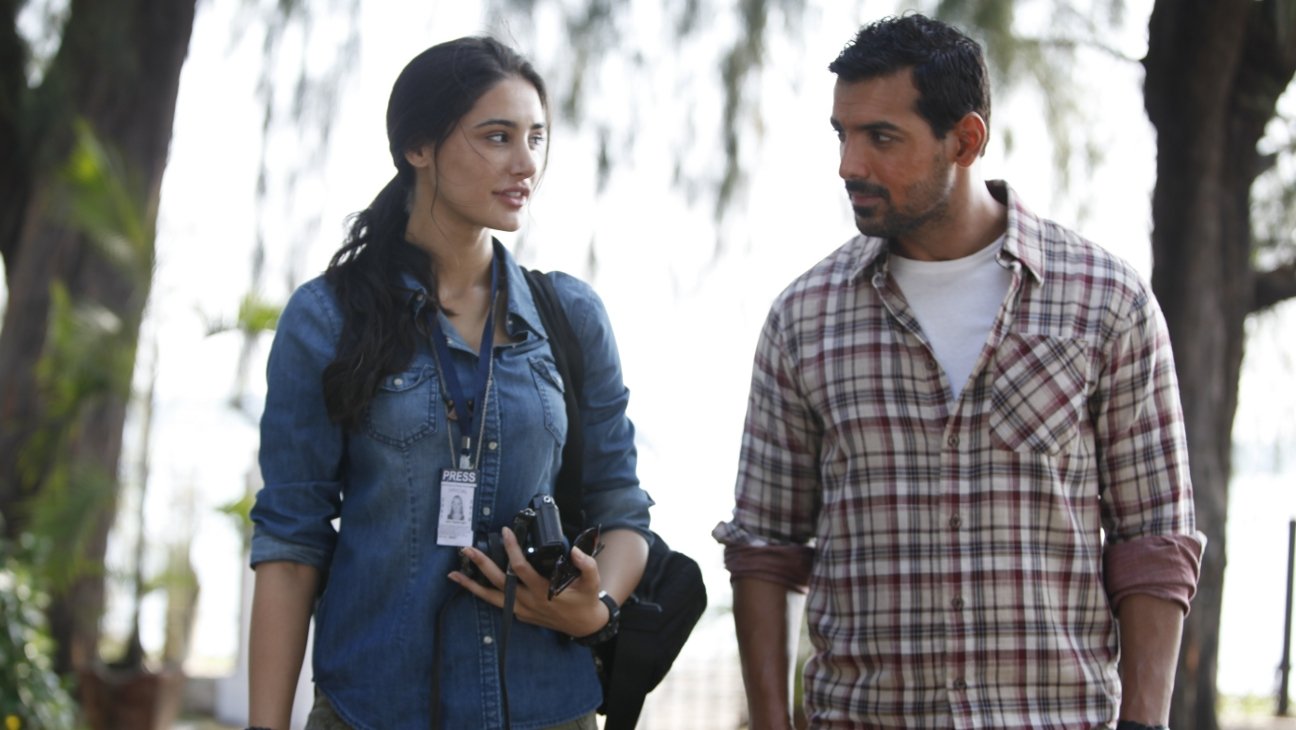 A political thriller with the backdrop of the Sri Lankan Civil War and the assassination of Indian Prime Minister Rajiv Gandhi was never an easy or politically safe subject to deal with. Because multiple opinions from the erudite of our society as well as people’s sympathy for the Sri Lankan rebels are sure to create controversy. But along with his screenwriter Somnath Dey and Shubendu Bhattacharya, Sircar went ahead to make a film that is nothing less than gutsy.

One can easily witness Sircar’s versatility and clarity in his filmmaking through Madras Café. He has consistently raised the bar with each of his films but he doesn’t outshine himself this time. The melodramatic and mass-appealing narrative style as well as the unconvincing performances from the principal cast worked as a deterrent in creating a gripping response from the film. Overall, the film only remains a brave attempt.

Sircar begins his inning as a feature film director with a film that is set in a conflicted Kashmir and narrates the tale of love between Captain Aman (Jimmy Shergill) and Adaa (Minissha Lamba). The conflict arises from the fact that Aman is a Hindu army officer from mainland India and Adaa is a Kashmiri girl. The socio-political situation of Kashmir in the film is such that if a girl is someone from a different religion it is a heinous crime with detrimental consequences. As the story progresses Aman and Adaa cross one hurdle after the other to keep their trust in one another alive.

Sircar’s impressive debut displays his commendable grasp of the grammar of mainstream cinema. The film announced the arrival of a major new voice in Indian cinema with the creative capability for combining unconventional elements with the approaches of popular cinema. But the slow pacing of the film along with the melodramatic ending somehow acts as a blemish to an otherwise well-crafted human drama.

With Yahaan Sircar begins his long association with Editor Shekhar Prajapati and Music director Shantanu Moitra. Yahaan premiered at the 7th Osian’s Cinefan Film Festival where it was awarded the Special Jury Prize. At the Star Screen Award Gulzar won an Award for Best Lyrics. 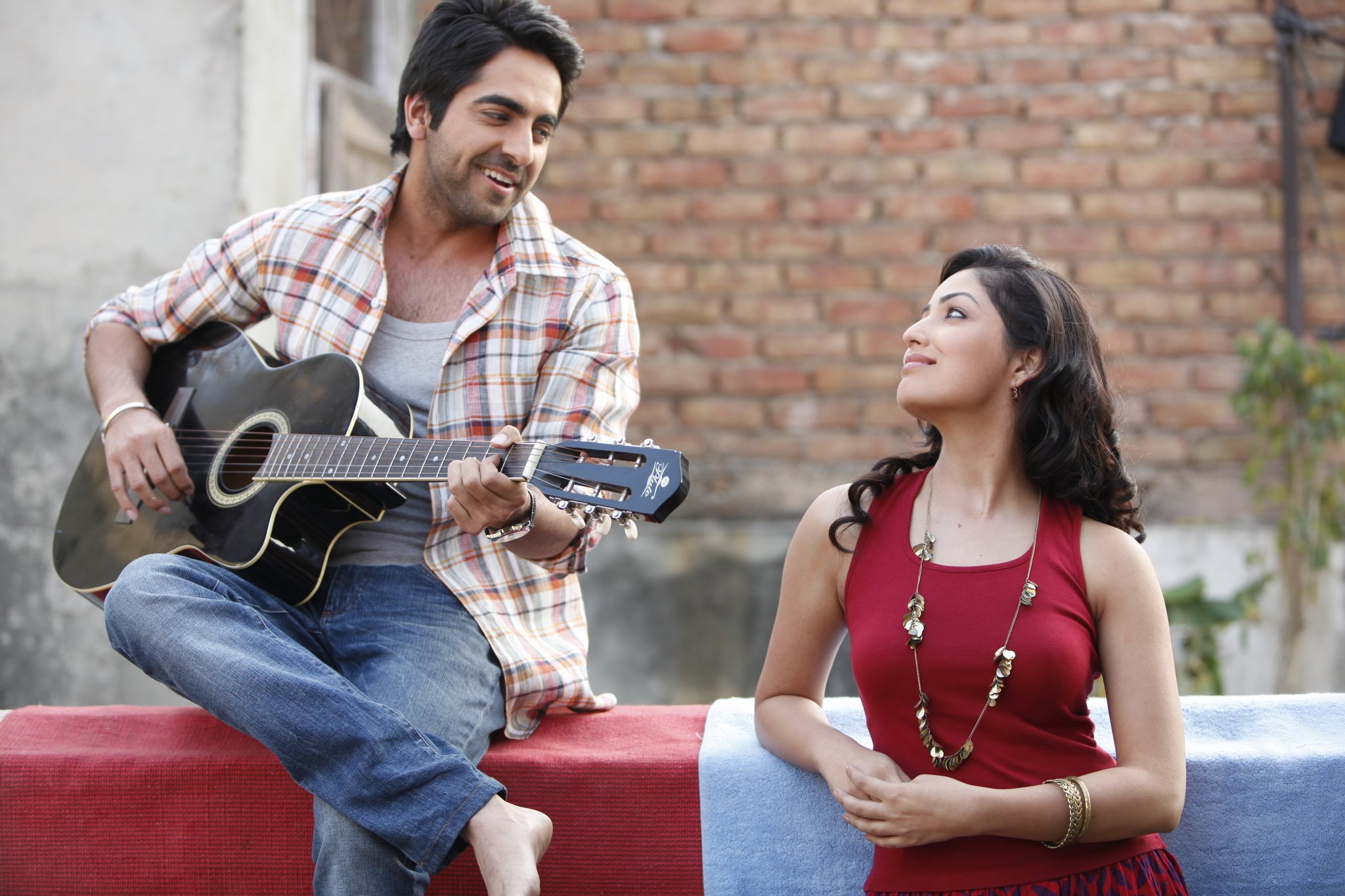 Sircar had his first taste of Box office success with his sophomore, which narrates the plight of a sperm donor Vicky Arora (Ayushmann Khurrana), a concept, which Bollywood had never dared to green light. As the narrative begins we are informed that Dr Baldev Chaddha (Annu Kapoor), who works as a fertility expert in Daryaganj, New Delhi is on the lookout for a healthy, high-performing donor. As ordained by destiny Baldev would encounter Vicky and convince him to become a donor. Though reluctant in the beginning, Vicky agrees to become a donor without being unaware of the repercussions of his decision.

Sircar exhibits a competent directorial style to a niche concept with modern cinematic sensibilities and showcases his interest in the lives of his characters with roots in their society, where family values are essential for existence. He brings genuine concerns of real people to the screen. The narrative underlines a complex and impeccable rendition of fragmenting family relationships in urban India. 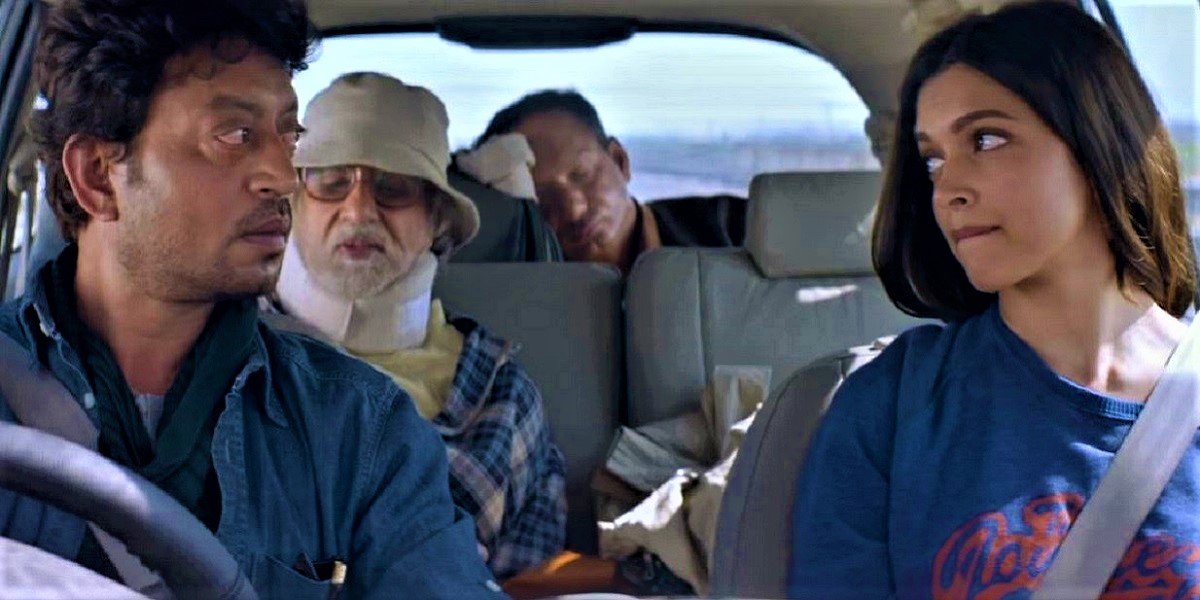 Deepika Padukone plays the titular role in Sircar’s bittersweet tale of strong emotional bonding between a daughter and her father, Bhaskhor Banerjee (Amitabh Bachchan). As age tightened its grip on Bhaskhor, he became more stubborn and erratic. He sentimentally compels his daughter to embark upon a road trip from Delhi to his ancestral home in Kolkata. Piku is concerned about his father’s health and grudgingly agrees to embark upon the trip. Rana (Irrfan Khan) the owner of a taxi service gets entangled with the trip and the result is a journey to discover certain aspects of their characters, which were not challenged or introspective so far.

With a balanced dose of humour and drama, Sircar effectively portrays the plight of an educated woman who seeks her own identity within the trappings of her traditional role of a daughter and a working woman. Parental responsibilities are a socially relevant issue that the contemporary generation is often encountered with and Piku has handled the theme with great sensitivity. 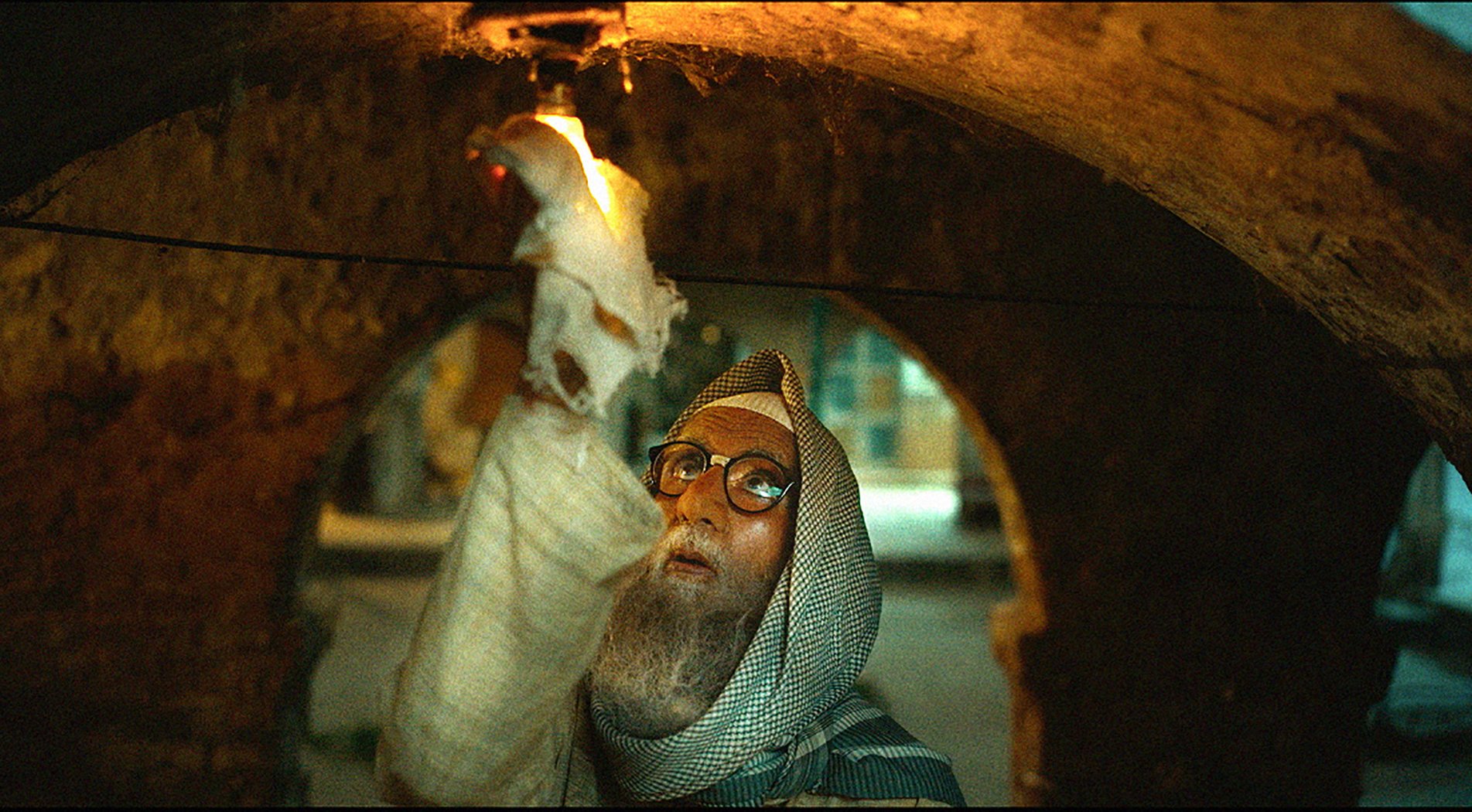 Mirza (Amitabh Bachchan) is a landlord who is always daggers drawn with his tenants. Baankey Rastogi (Ayushmann Khurrana) is one of those unfortunate tenants residing at the dilapidated Fatima Mahal in Lucknow. Both Mirza and Baankey are opportunists and each of them has hidden ambitions. But when Baankey had a chance encounter with an official of the archaeological department it brings dramatic changes in the lives of the tenants and the landlord. We soon realize that the world is full of corrupt individuals where one tries to outsmart the other at the drop of a hat.

Sircar adopts a niche approach to bring the subtlety and pervasive humour within the story. He has shown courage in choosing to build a film around an old mansion that explores the interiority of greed within us. The production design of the film brings architecture, landscape and interiors of exceptional beauty and cinematic integrity, synchronized to perfection with the thematic content of the protagonist’s crumbling ambition. The city of Lucknow authentically becomes a character within the narrative and displays the articulation of shared urban angst. The meticulous mise-en-scene masterfully blends visual, sound, music and performance.

Related to Shoojit Sircar Movies – Gulabo Sitabo (2020): ‘Prime Video’ Review: A Tale of Landlord and Tenant That Barely Takes Off 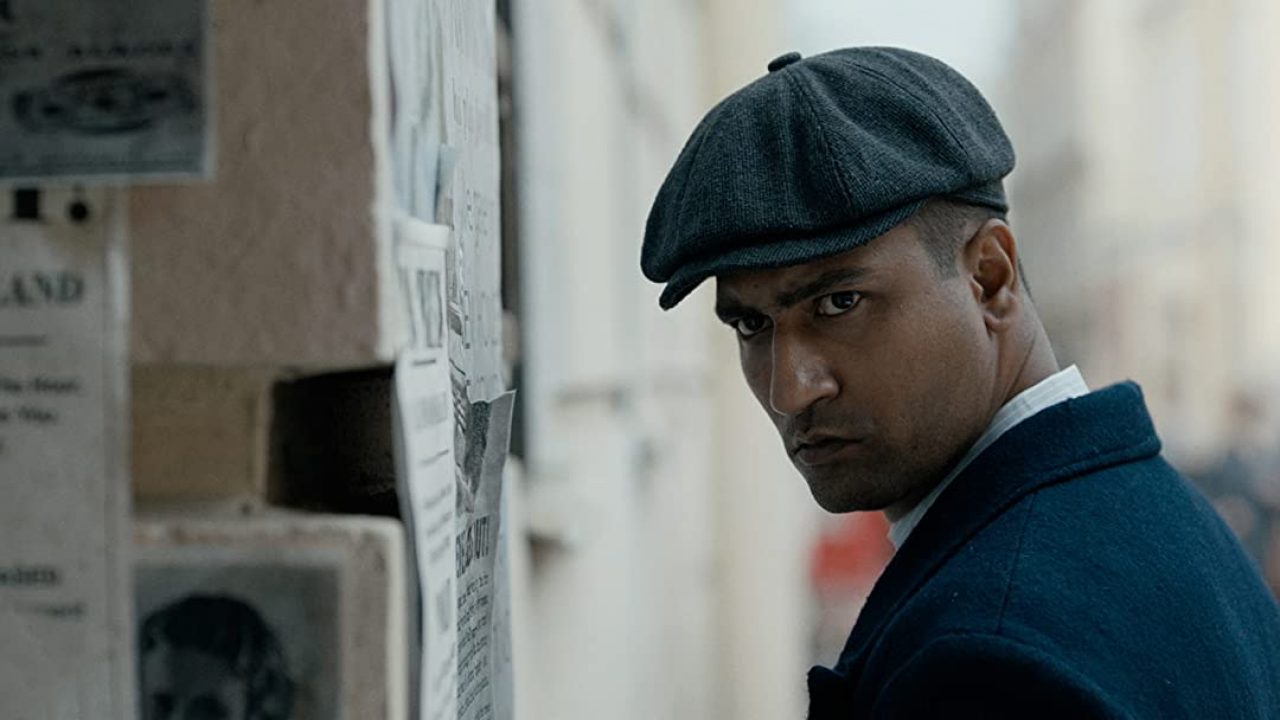 Sircar’s recent outing is not an elaborate history lesson inundated with factual accuracy and the density of politics of the era in favour of cinematic pleasure. It is a slow burn account of how a young boy after witnessing mayhem gradually develops into a freedom fighter with a vengeance. We don’t watch him going through a rigorous exercise regime or belting out patriotic songs to express his love for the citizens of his pre-independent country. The complexities of the anti-colonial struggle are not simplified to an easy message of bravery and righteousness.

The titular role played by Vicky Kaushal never misses a trick as he instinctively merges with the spirit of his role and with great restraint and control. The step-by-step transformation of a normal boy to that of a freedom fighter is convincingly depicted. The sequence where he ferries injured bodies of individuals in a cart from the killing field to the hospital displays his maturity as an actor in handling a grisly human tragedy.

The narrative effectively delves into the spirit of the legendary character and brings alive the memories of a historic and culturally rich period that suffered appalling injuries due to the imperialistic attitude of colonial rulers. Had the length of the film shortened, it would have easily qualified to gain the status of a modern classic.

Related to Shoojit Sircar Movies – Sardar Udham [2021] Review: A Slow but Steady Exploration through the Annals of the Aftermath of the Jallianwala Bagh Massacre 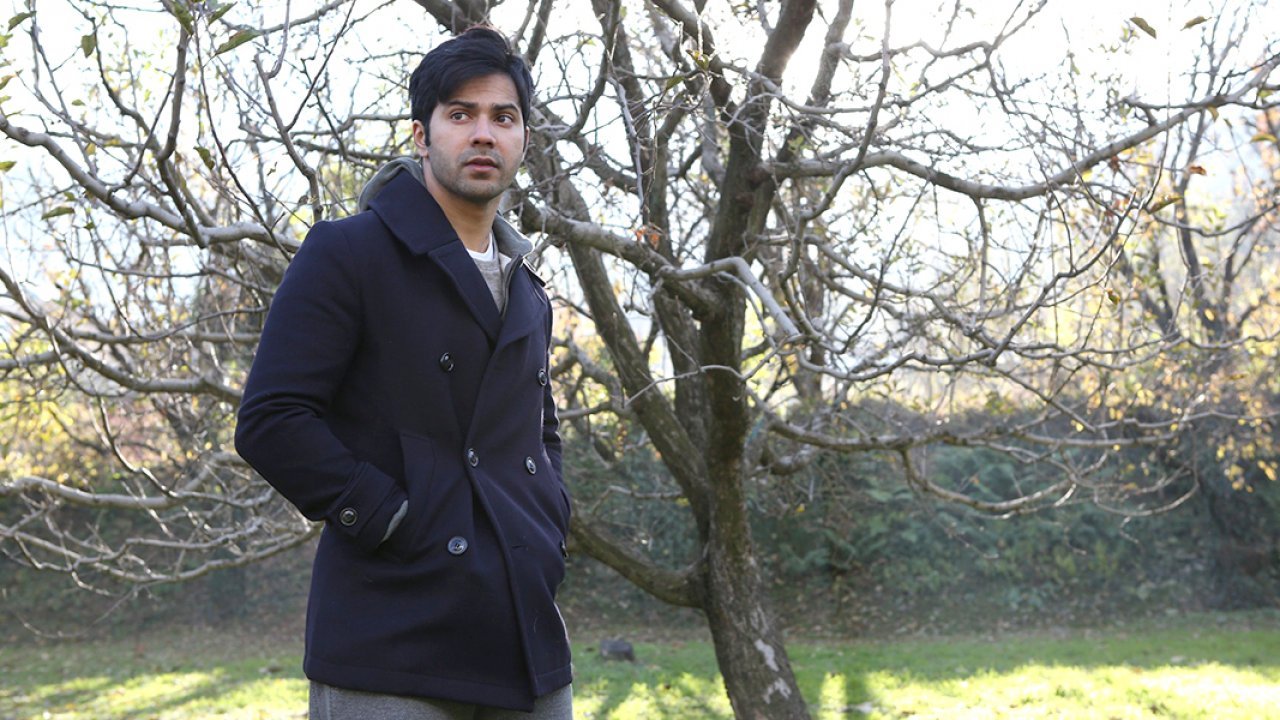 Dan (Varun Dhawan) is a student of hotel management and at present working as an intern at a top hotel in Delhi. During the night of New Year, a party is in session on the third floor of the hotel. Unfortunately, an accident occurs and one of Dan’s colleagues, Shiuli (Banita Sandhu), is admitted to the hospital. What ensues thereafter is a story of love that pushes us out of our comfort zone and challenges our perceptions of compassion, isolation, and what it means to truly care about someone.

Sircar and his scriptwriter masterfully and sensitively render a visual narration of a volatile and confused situation of a young girl and her loved ones with great depth and simplicity of words. Sircar favours realism and the camera is almost always kept at a distance to be as unobtrusive as possible. Naturally, this can make the film move rather slowly. Sircar isn’t looking to rush things by editing out inconsequential scenes of people walking down the street or waiting in the hospital corridors. This is all seemingly in the effort to make the movie feel as real as possible.

Banita Sandhu in her debut delivers a touching and absorbing portrayal of an individual going through the trauma of her immobility. Whereas, Varun Dhawan gives a dramatic performance of urban youth who struggles to give a new life to his beloved. As a film, October is one of the most poetic and visually stunning interpretations of a story. It highlights the values of selflessness and compassion made by an Indian filmmaker in the last decade.

The French Dispatch [2021] 'BFI' Review: A Quirky cast, stunning shots, but little else

The Estate [2021] Review: A dark comedy thriller that barely manages to survive its own motives