A cowboy in circa 1870 travels deep into the Wild West with the hope of rescuing and marrying his true love, accompanied by a bewildered pastor. It might be a common set-up in the mythical westerns of John Ford or Howard Hawks, but David and Nathan Zellner playfully thrashes the trappings of such a narrative.

Sibling film-makers David and Nathan Zellner makes oft-kilter cinema, charged with absurdist humor and modified archetypes, that aren’t easily categorizable. Contrary to what the title of their movies suggest, Kid-Thing (2012) wasn’t about an innocent child and Kumiko, the Treasure Hunter (2015) didn’t progress as a adventure drama with the protagonist perfectly zeroing-in on a concealed fortune. So with Damsel (2018), we could guess Zellner bros might challenge our notion of seeing a docile woman in jeopardy.

Damsel is what we cinephiles label as ‘revisionist western’, not that the utterance of the word should make you immediately recall and expect a classic work of revisionist western like McCabe & Mrs. Miller (1971), Pat Garett and Billy the Kid (1973), Dead Man (1995), The Assassination of Jesse James (2007), Meek’s Cutoff (2010), etc. Zellner bros’ film is an intriguing yet an over-extended feature with modest ambitions that uses the canvas of Old West to convey timely feminist creed (keeping up with old cinematic tradition of employing Western genre to depict the current period’s injustices or unrest, for eg., High Noon & Johnny Guitar) . 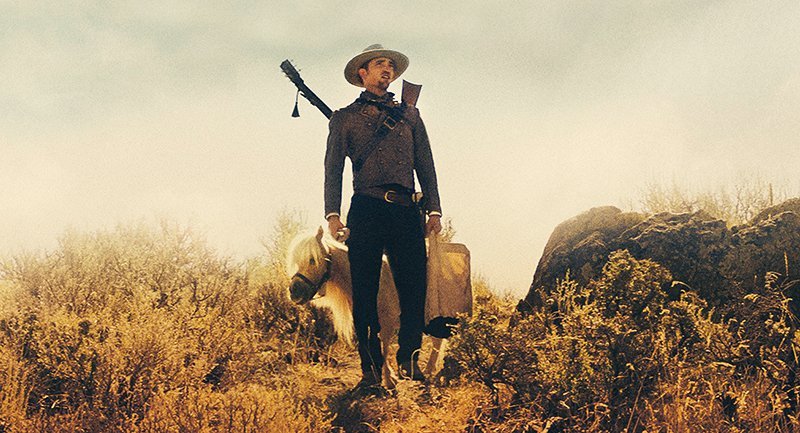 A cowboy in circa 1870 travels deep into the Wild West with the hope of rescuing and marrying his true love, accompanied by a bewildered pastor. It might be a common set-up in the mythical westerns of John Ford or Howard Hawks, but David and Nathan Zellner playfully thrashes the trappings of such a narrative. Damsel opens with an idiosyncratic prologue scene, capturing the oddball conversation between two men – one a miserable pastor (Robert Forster) and the other a vagrant (David Zellner) – waiting for a stagecoach. Before long, the pastor disposes off his cassock, and cloaked in his long johns he madly walks into the desert. Later, we cut to the shot of a mythic west that doesn’t capture a desert but to our bewilderment, a picturesque rocky coastline. A young man gets off the boat with a miniature horse named ‘Butterscotch’ adorned with wavy blonde locks. He journeys deep into the territory and reaches a dry frontier town whose bedraggled bartender only serves a scorching brand of whisky.

The priggish and slightly goofy young man introduces himself as Samuel Alabaster (Robert Pattinson) and he is in the town to get the preacher to officiate his wedding. The vagrant mentioned above has now taken over the priestly duties. The two men set off together on a journey to reach Samuel’s precious ‘Honey-bun’ or fiancée, Penelope (Mia Wasikowska). Apart from a brief jolly-good dancing scene in the opening credits, Penelope appears in the film’s first half only in the form of a photograph which Samuel keeps it in a locket. Considerable visual gags are littered throughout the journey that are diffused in the way the Zellner brothers re-imagine the realities of the Old West. “Technically speaking, are we in Injun country?” questions the pastor, to which Samuel nonchalantly replies, “Technically speaking, everywhere’s Injun country, I reckon”. We see displaced Chinese immigrants, an absurd hanging ceremony, and in many other ways the film-makers poke fun at what’s usually portrayed as the chivalrous components of the Old West.

There’s not much fun or tension in the journey as Samuel single-mindedly pursues his love, dragging the miniature horse named after Penelope’s favorite candy. At one point, Samuel has strange, accidental encounter with a barbarous, unkempt man named Rufus (Nathan Zellner). Soon, Samuel confesses to the pastor that Penelope is kidnapped by Rufus and his brother Anton. Confounded by the nature of this dangerous rescue mission, the pastor tries to back-off. But Samuel’s pitiful craziness somehow convinces the pastor to go along with his plan. That’s exactly when Samuel’s plan falls off. However, not due to reasons we think of. The ensuing event heavily ruptures the narrative and leads to a twist that also upends our expectations of genre tropes. The aftermath of Samuel’s tomfoolery leads to another rough journey. It is taken by Penelope, whose stern authority keeps her away from bossy, self-delusional male suitors.

Writer/directors David and Nathan Zellner’s verbal and visual japes pretty much contain the absurdist, deadpan tone of Coen Brothers’ movies. Damsel is all the more funny when it persistently undercuts the traditional expectations of the narrative. Using the monumental settings (Jeff Nichols’ regular cinematographer Adam Stone mesmerizingly captures the geographical magnificence) that doubles up as symbols of masculinity, the Zellner bros roasts the rituals and preoccupations weighing down the male race. Through Penelope’s repeated and impatient assertions that ‘she doesn’t need saving’, the film-makers offer the robust image of a woman capable of mapping her own boundaries and pursuing after her own desires. The comedy in Damsel doesn’t rest in capturing the behavior of men of good will against men of bad will, but in identifying the cluelessness of all the men when a female wishes to unmoor herself from the narrow gender expectations. The Zellners constantly hint at how some of this old moral worldview of the Old West still plagues our modern times. Accompanying the film’s feminist message is also the jabbing one-liners directed towards cultural appropriation and colonialism.

The problem I found with this approach is that at some point (especially after the mid-narrative shift), the themes and reinvention of genre tropes occupies a great portion than the focus on characters. I wouldn’t say the narrative stagnates, but the scenes keeps on riffing at the male characters’ nonsensical behavior without taking Wasikowska’s character seriously enough (in due process the gags too become one-note and predictable). Fortunately, a handful of these narrative hang-ups are dispelled by compulsively watchable enthusiastic presence of Robert Pattinson and Mia Wasikowska. For Pattinson, Samuels isn’t as much a prominent character as the ones he played in Cosmopolis, The Rover and Good Time. But he clearly enjoys playing a numbskull, bringing in abundance of charm and laughs. Wasikowska, often typecasted as the peachy girl waiting for her prince-charming, exhibits steeliness and valor that becomes the narrative’s beating heart. If only her character was developed more profoundly and the Zellners were more subtle with their commentary, Damsel could have been a masterful piece of revisionist western art. Nevertheless, the final product is a fascinating, worthwhile western comedy that happens to deliver an uncannily clever allegorical message about the gender-specific identities.

Village of the Damned [1960] Review: Beware The Stare That Bewitches!