Iceland movies may have limited scope and almost always have brooding, distressing mood, but in this increasingly homogenized world it is exhilarating to watch the survival of unique domestic film industry.

Iceland represents one of the world’s smallest national cinemas. The country’s population is just above 334,000. Few Nordic critics point out that some times even a successful local film fails to recuperate its cost at the local box office. So why bother? Isn’t it better for the largely English speaking domestic population to just watch Hollywood block-busters? Or couldn’t they make cheap – both in terms of money and thinking — imitation of those generic works? Well, the Iceland film-making fraternity exactly didn’t want that. Despite minimal resources, they started by making cinema strictly for native audience and gradually evolved to weave culturally distinct yet universally resonant stories. Today, the relative quality of Icelandic cinema is simply staggering.

Iceland had been the location for the making of Nordic silent films in the late 1910s. The first film by an Icelander was made in 1924, yet the officially approved Icelandic feature film was made in the year 1949. And up to early 1980s, film-making was considered an anomaly in the small nation. In 1978 with the initiation of Icelandic Film Fund, the nation’s modern film-making journey commenced. Thanks to the early talented Iceland directors, the home-grown films took off well. However, the novelty of Iceland movies soon wore off by the mid 1980s. Again in 1990s, the Iceland cinema saw an unparalleled explosion, thanks to pan-European funds and new generation of film-makers. After 2008 financial crisis, the future of Iceland cinema was once again forced into a precarious position. Yet, their film-makers are continuing to provide excellent, multiple award-winning works in this new decade too. Some may say that there’s nothing great about Iceland cinema. It may have limited scope and almost always have brooding, distressing mood, but in this increasingly homogenized world, it is exhilarating to watch the survival of unique domestic film industry (time for an interesting trivia: in 2009 Iceland’s comedy Mr. Brajnfredarson beat Avatar in the local box-office).

It has been a hard but enjoyable task to produce this list of good Iceland cinema. I wasn’t able to include few acclaimed Iceland comedies because it wasn’t available [mostly I wanted to see — On Top (1982), New Life (1983), Stella On Holiday (1986) and Nietzchka Keene’s art-house drama The Juniper Tree (1990)]. If I am unaware of any Iceland movies, not mentioned throughout the list, please educate me in the comments section. Any way, here’s my selection of essential cinema to contemplate on the human condition in Iceland landscapes:

Movie critics often cite Agust Gudmundsson’s Land and Sons (Land og synir) as the origination point of contemporary Icelandic cinema. It was based on Indridi G. Thorsteinsson’s novel (father of renowned crime-fiction writer Arnaldur Indridason). It’s a story about generation of weary farmers, dwelling in a remote valley north of Iceland. The film deals with typical themes you may expect from a narrative set in cold, isolated land: the unyielding bleakness of the rain swept landscape, the degradation of familial bonds, and the distant dreams of younger generation. Despite the occasional ineptness in acting and production, Land and Sons was first Iceland film to ponder over urban expansion and rapidly changing social & economic climate. The movie was also infamously known for the unsimulated shooting of a horse.

Hrafn Gunnlaugsson wanted to make an authentic Viking era movie in order to counter the insipid Hollywood stereotypes. Swedish producer Bo Jonsson and Gunnlaugsson wrote the story which was predominantly inspired by Akira Kurosawa’s Yojimbo, John Ford’s The Searchers, and by the sagas of early Icelanders. Known as Icelandic film industry’s first international co-production, the movie churned out a brooding revenge narrative. The story opens with Vikings plundering an Irish village. A young boy witnesses his parents’ murder and the kidnapping of his sister. Two decades later, he arrives at the Icelandic beaches for revenge and to know the where-abouts of his sister. Although Gunnlaugsson’s aesthetic flourishes aren’t half as good as the aforementioned cinematic masters’, he should be commended for realistic rendition of an ancient time and place. ‘When the Raven Flies’ is followed by fairly good sequels — ‘Shadow of the Raven’ (1986), and ‘The White Viking’ (1991). 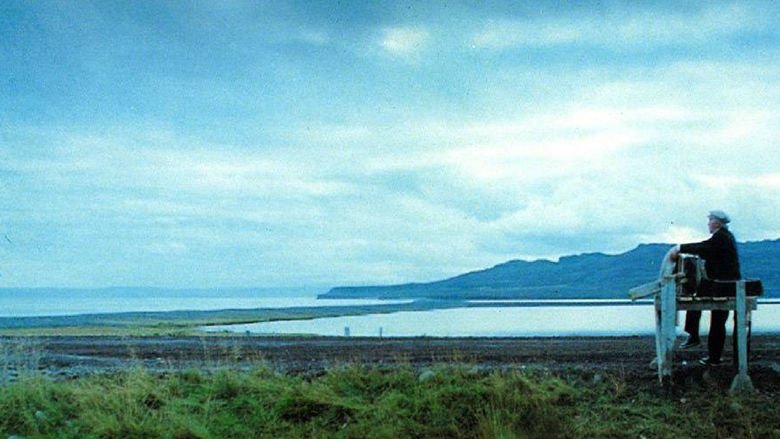 The 1980s Iceland movies were largely inspired by home-grown mythical tales & sagas. Moreover, these films were made for Icelanders. However, in the 1990s new generation of film-makers deeply contemplated on their nation’s social themes yet injected universal emotions to resonate with film-lovers around the world. In that way, Fridrik Thor Fridriksson’s Children of Nature marks the great international breakthrough of Iceland cinema. While the aesthetic sense of 1980s movies borrowed from major directors like John Ford and Sergio Leone, the 1990s cinema had a more subtle art-house film-form. Mr. Fridriksson, in the 1970s ran a film society, which had more than 2,000 members. It was a revolutionary number, considering the nation’s population, and remember that this was before video-revolution era, so it involved careful transportation of 35mm or 16mm films for screening. Fridriksson worked with the government to establish Reykjavik Film Festival and also set up Icelandic Film Fund.

Before Children of Nature, Fridriksson mostly made documentaries. He made his first feature film in 1987 – White Whales. Neither the documentaries nor the debut feature doesn’t stand close to the brilliance of Children of Nature. The film chronicles the journey of two geriatric couples who escape from Reykjavik old age home to reach their birth place, situated in remote fjords. Fridriksson’s minimalist film-making style is mostly character-driven and hence moves at a glacial pace. The old people’s odd pilgrimage takes us through the haunting and stunning beauty of Iceland’s raw countryside. This is a very simple road movie about elderly couple reinstating their dignity. Yet the passages of sublime visual beauty and restrained performances makes it very memorable one. Although the film deals with tragic themes, Fridriksson spikes the narrative with fine dose of observational comedy and whimsical vignettes. Children of Nature became the first Iceland film to be nominated for Oscar which led to its international distribution. Mr. Fridriksson used the profits from distribution deals to buy production equipment. 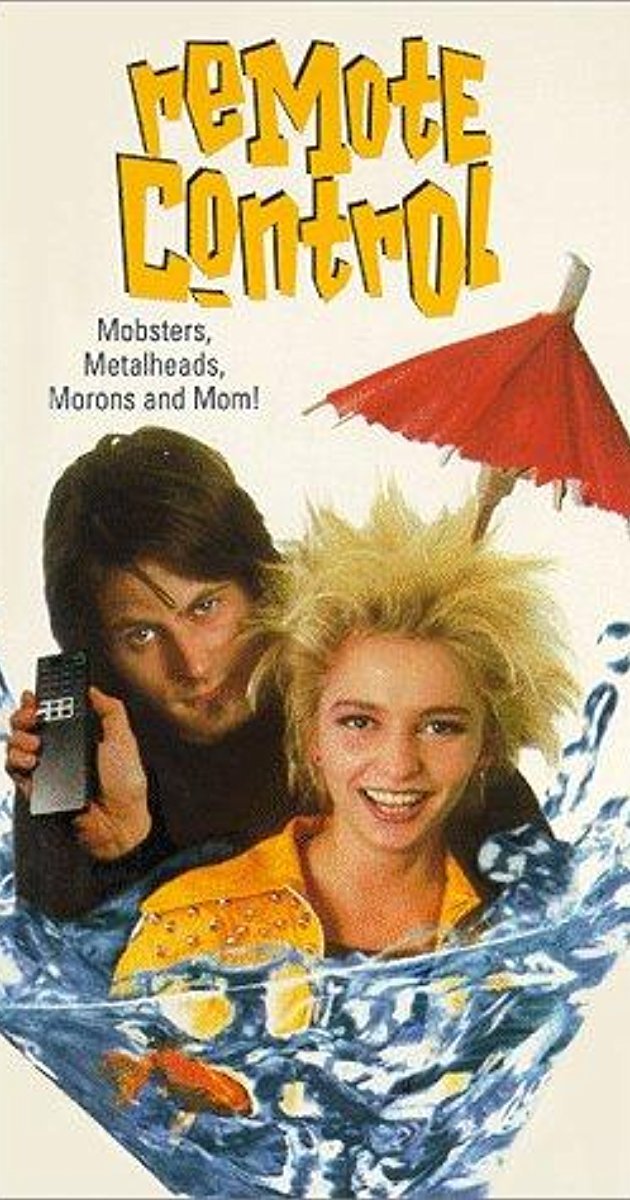 While guns set up narrative conflicts in Hollywood films, a missing remote control drives this tale of Reykjavik underworld. Oskar Jonsson’s debut feature revolves around young mechanic Axel (Bjorn Jorundur Fridbjornsson), his mother and hard-partying sister Maeja. Axel goes on to retrieve the TV remote for his mother which accidentally taken by the sister. In this absurd quest, he gets embroiled in the conflict between a local liquor smuggler and night club owner and also falls in love. Remote Control’s comedic sense is considered to be too ‘Icelandic’ to be fully appreciated by foreigners like me (and the English subtitles don’t make sense now and then).  However, the clumsy and silly antics of the imperfect characters make it an enjoyable comedy, providing a fine counterpoint to the nation’s bleaker visions of life.

Fridrik Thor Fridriksson’s fourth feature film has an enchanting transnational narrative. American indie film-maker Jim Jarmusch was invited (in the early 90s) for the screening of his brilliant anecdotal comedy Mystery Train (1989) at Reykjavik Film Festival. Producer Jim Stark made the visit on Jarmusch’s behalf. When Fridriksson and Mr. Stark had an amiable conversation, there were talks of making a film. Stark asked the director to include Japanese actor Masatoshi Nagase in his new story ideas. Later, Fridriksson traveled to Japan to get a grip on his story when he came across the news about the death of two Japanese scientists in Iceland (by drowning). Japanese people traveled to Iceland to perform the due rituals for those scientists and hence Fridriksson was bestowed with a narrative idea (Jim Stark also co-wrote the script for Cold Fever).

The film is about a young Tokyo executive Hirata traveling to Iceland to perform ceremonies at the site of his parents’ death. Alas, he chooses to visit the nation in the middle of winter and has many strange, magical adventures. Similar to all the great culture-clashing road-movies, Cold Fever is memorable for its oddball characters. Director Fridriksson portrays nature in the same way as the people – both cruel and unbelievably poignant. Similarly, the cultural gets blurred as Hirata binds with the inapprehensible native people through the common thread of humanity. 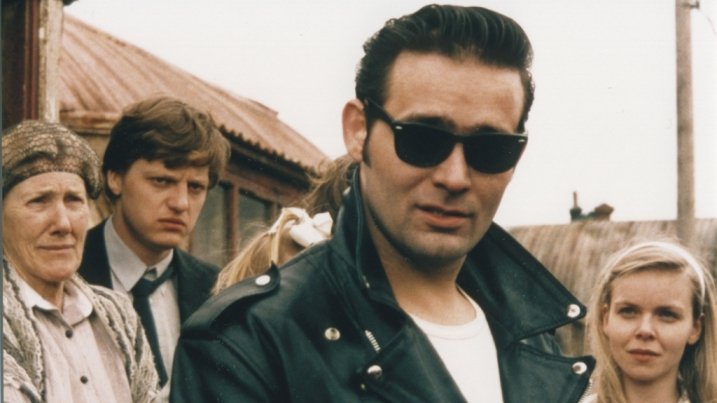 Fridrik Thor Fridriksson follows up Children of Nature & Cold Fever with yet another good wry comedy, based on Einar Gudmundsson’s novel. The film is set in the 1950s in the squalid premises of Reykjavik. Renowned Iceland director Baltasar Koramkur plays rebellious Baddi whose mother has left him and his introverted brother Danni for an American soldier. The brothers move into abandoned army barracks with their weary grandfather and haranguing grandmother. Fridriksson opens the film with a marriage and ends it with a funeral. In between the extreme rituals, lie the quirky, tragic, and unpredictable small-scale adventures. The narrative mostly unfurls in episodic vignettes, rejecting the notion to center its tale on one particular character. Devil’s Island could be read as the allegory for Iceland’s mordant Americanization. The sullen characters of the movie are left to feed on the unsavory parts of a culture that isn’t theirs.

Baltasar Kormakur’s crowd-pleasing black comedy doesn’t have any particularly likeable character. Protagonist Hlynur (Hilmir Snaer Gudnason) is a man-child who sleeps, drinks, rummages through porn collection and engages in meaningless relationship with members of opposite sex. Slacker would be too simple a word to describe his existence.  His bleak, hopeless life with his mother goes unchanged until the arrival of a sexy Spanish house guest Lola (Victoria Abril). Yes, of course Hlynur is romantically interested in her. Alas, Lola becomes his mother’s lover. Although Hlynur isn’t an appealing character, Gudnason’s effortless performance exposes the distracted guy’s vulnerability. The comedic elements aren’t very unique and most relies on oddity and surprise. Yet Gudnason boosts the funny quotient of the narrative. Baltasur Kormakur’s comedic style reflects Aki Kaurismaki’s works, whereas the film’s sexual propensity brings to mind Pedro Almodovar. 101 Reykjavik was one of widely seen Iceland movies (with great commercial success and mixed critical reviews), although it only provides a middling snapshot of Icelandic life.