False Positive HULU Review – I don’t think there’s a term more ill-conceived in our cinematographic society than “Elevated horror.” To film-twitter pundits, elevated horror refers to “movies that don’t rely heavily on jump-scares or gore, but are so emotionally and psychologically disturbing that they traumatize even the most seasoned of horror buffs. Many of the films also seem to contain allegorical meanings.” as if the consensus of “horror” relies on jump-scares. “Jump-scares” isn’t horror, but rather an attraction that only exists when a creatively bankrupt filmmaker (and studio) do not know how to render their film “scary” through its eerie atmosphere, performances, score, sound design, and, at times, gore. However, pundits have an insatiable need to classify “high-art horror” that rises above mainstream expressions of the genre as the “purest” kind of horror there is, with only one studio holding the monopoly of “real horror” against “fake horror”: A24.

There’s only one problem: “real” and “fake” horror don’t exist. Horror regroups all kinds of sub-genres: slasher, psychological thriller, haunted house movies, atmospheric horror; you name it. “Elevated horror” is not a sub-genre, but rather a pretentious (and elitist) term to describe psychological thrillers and ambiguous atmospheric thrillers,  and A24 solely bases its horror on either psychology or atmosphere (sometimes both, in the case of Hereditary and Midsommar). Their latest film, False Positive, is exactly that: a psychological/atmospheric horror film that thinks it’s a smart, contemporary retelling of Rosemary’s Baby but quickly “shits the bed” (for lack of better words) once its final act hits and morphs into a morally questionable and creatively inept film that only feels like a bad case of “mommy brain.”

The film tells the story of Lucy Martin (Ilana Glazer), who struggles to get pregnant with her husband, Adrian (Justin Theroux). Adrian believes he’s found a solution in the form of Dr. John Hindle (Pierce Brosnan), his former teacher and a leading figure in the field of fertility. After several visits to Dr. Hindle’s office, Lucy becomes pregnant with triplets. After a selective reduction to ensure a safe birth, she begins to question Dr. Hindle’s methods. She starts to question the fabric of reality through hallucinations and multiple nightmares about her pregnancy. Is it just a terrible case of “mommy brain,” or is Dr. Hindle doing something to the baby? Spoiler alert: kind of both. 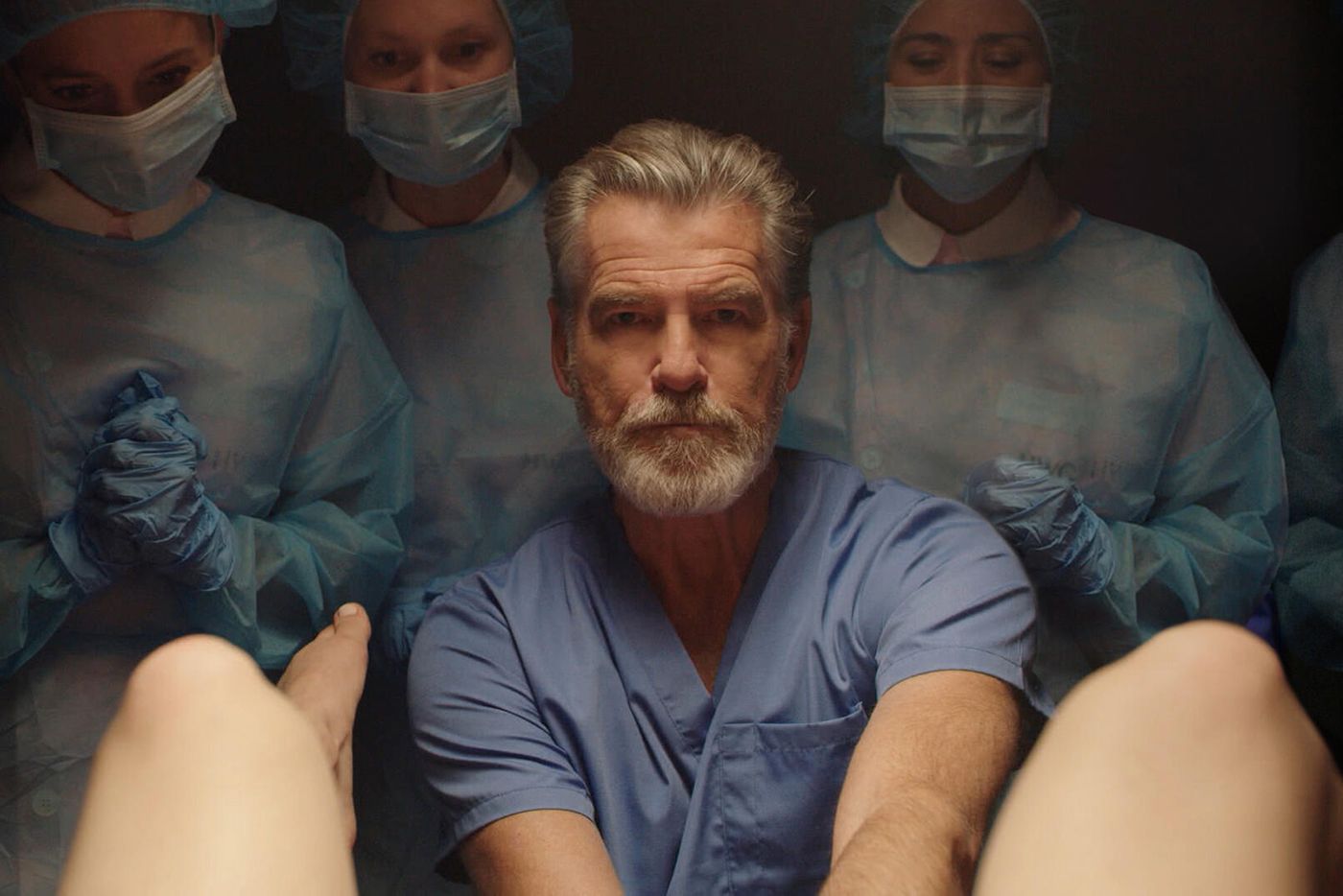 It becomes tough to discern what’s real and what isn’t as the filmfilm moves forward, and the more advanced Lucy’s pregnancy becomes. As the film progresses, one even beginning to question whether or not everything we’re seeing is a pure fabrication of Lucy’s imagination and that her “dreams” are actually “within dreams” and the entirety of the picture was “all a dream.” Heck, I was actually waiting for Lucy to wake up from her elongated nightmare for the film to produce one of the biggest screenwriting clichés imaginable, which is the number one sign to confirm how uncreative you are. But, alas, it’s not “all a dream,” but rather an elongated nightmare in which we observe a pregnant woman progressively going crazy due to her apparent “mommy brain” symptoms.

The number of times the film mentions “mommy brain” as some sort of justification for anything mildly weird is so on the face that you soon understand that the film doesn’t really know what it wants to say and/or talk about on Lucy’s pregnancy. Is she crazy? Or is it just “mommy brain”? are questions you might ask yourself a plethora of times, without an actual answer.

Also, Read – HEREDITARY [2018] REVIEW: HORROR IN ALL ITS TWISTED GLORY

It should be painfully obvious right from the get-go as early hints indicate Dr. Hindle being a rather sinister figure. So, the film’s twist doesn’t come as surprising or shocking. Instead, the film tries to “shock” audiences during its final reveal by using the good ol’ “bait and switch” twist, in which the audience constantly expects one thing but gets another instead.

Director John Lee and writer Ilana Glazer want to say something on pregnancy and trusting “experts” but fail to develop anything meaningful for its revelation to feel powerful. While the film slowly builds itself up for a twist through an eerie atmosphere and a particularly memorable score from Yair Elazar Glotman and Lucy Railton, exuding Oneohtrix Point Never vibes in its opening credits sequence while then dictating the atmosphere of the moment, the film’s complete “180” of a twist doesn’t stick the landing and makes everything that came before feel terribly manipulative and uninteresting. 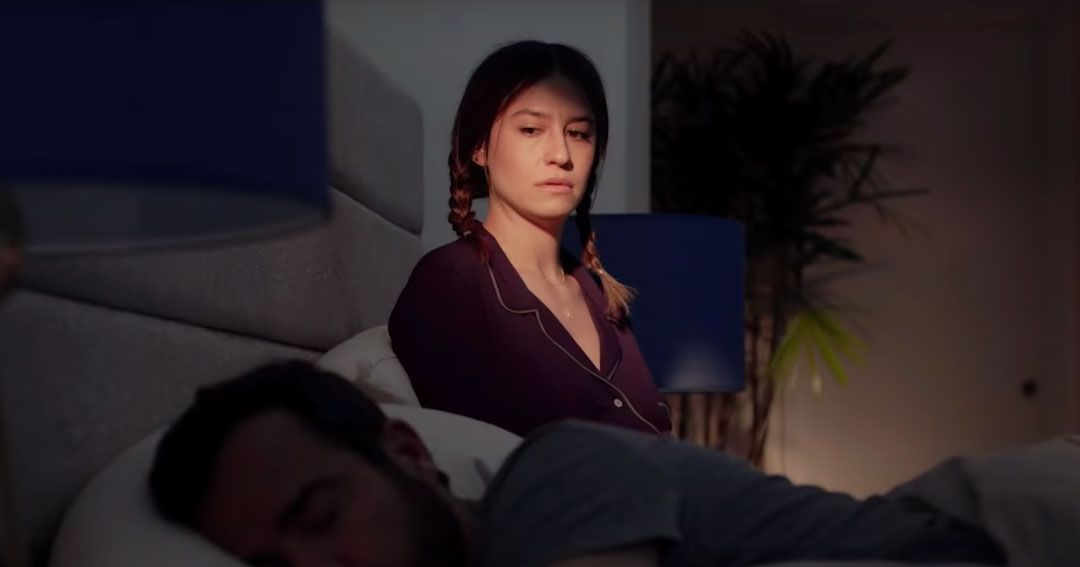 I’m trying to be extremely vague here, as it’s best to enter this film as cold as possible, but I will say that its first two acts are somewhat enjoyable. It’s fairly standard stuff, but they are “elevated” (not through its horror, mind you) by its terrific performances from Ilana Glazer, Justin Theroux, Gretchen Mol, and Pierce Brosnan.

Glazer particularly steals the show when the fabric of her reality becomes warped through her “mommy brain” fantasies, with Theroux acting as Lucy’s moral conscience. Theroux has always been a wonderful actor, and he’s no different here, sharing tangible chemistry with Glazer’s Lucy. However, I was more taken aback by Pierce Brosnan’s deliciously twisted portrayal of a fertility doctor with skeletons in his closet. Every scene involving him was a pleasure to watch, as the audience members fully know that he is not to be trusted but exudes enough charm and calm wit for us to question if his intentions are innocent and/or malicious. Gretchen Mol is also a great addition to the cast, as Dr. Hindle’s robotic secretary, behind her “nice and relaxed” façade, hides a deadly secret that begs to be uncovered.

And once that “deadly secret” is uncovered, False Positive starts to flatline and becomes yet another standard horror flick that never once proves it’s as “elevated” and “high art” as some others would like to prove it is. Wonderful performances and a creepy atmosphere through its score don’t save False Positive for being anything more than another run-of-the-mill horror film made by a studio that hasn’t made that many horror masterpieces unless Ari Aster directs them. Now that’s legitimate horror right there.

What happens 'When A Woman Ascends the Stairs'?