An examination of consequences for a woman ‘who ascends the stairs’ in the post-war Japanese society.

Mikio Naruse is regarded as one of the leading proponents of the shōshimin-eiga genre – essentially films about the proletarian class life. Though he was largely unknown outside Japan during his lifetime, he posthumously attained the deserving popularity and recognition as his peers Ozu, Kurosawa and Mizoguchi did while they were alive.

His representation of lower socio-economic class women in post-war Japan is strikingly effective. Without the clutch of sympathy or feelings of pity associated with their rundown living condition, he shows the challenges of the aforementioned class’ routine-life which at times resonates deeply with our own emotionally taxing day-to-day life. In Naruse’s films, the women belonging to this particular class won’t come under the strict modern-day classification of feminists which many films adapt for a shallow and caricaturist portrayal of modern-day women. What Naruse offers is lived-in reality, in which the woman are in conflict and struggling with themselves and the society, all the while doing their best to stay afloat. This fundamental struggle to survive naturally inculcates or nurtures the feminist quality in them. This in turn to pushes Naruse’s women to grapple with how to affirm their own identities amidst the constantly transforming societal notions of gender and familial roles. Eventually or inevitably, they engage with the stringent socio-economic framework that never gives them the space to grow and, instead often tramples them.

While Naruse never identified himself as “feminist,” his films often challenged the strict gender norms of Japanese society. One such beautiful film, ‘When a Woman Ascends the Stairs,’ (Onna ga kaidan o noboru toki) in a way, encompasses all the pivotal thematic elements and subject from his vast filmography of eighty-nine films. 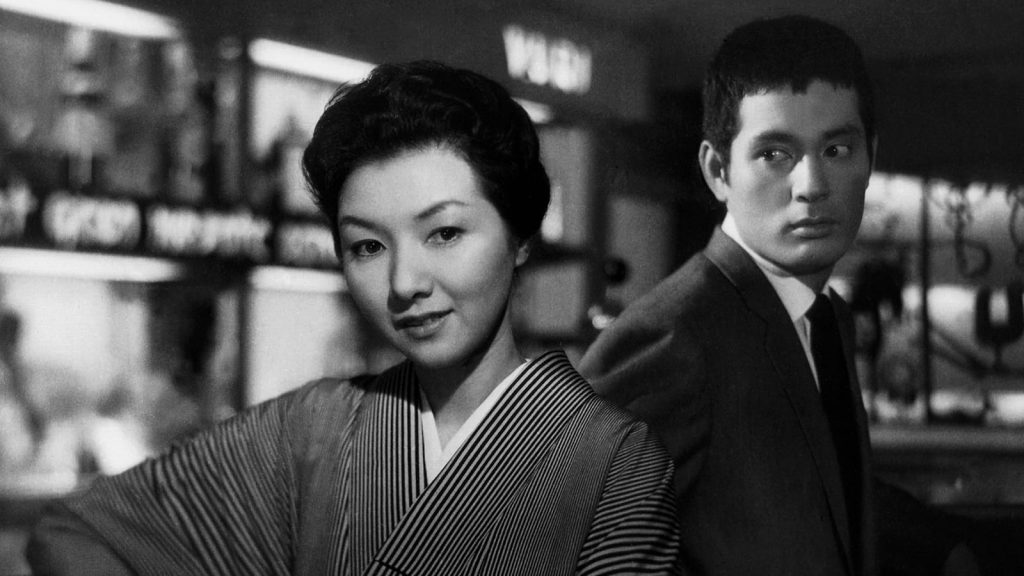 What happens when a woman ascends the stairs?

When a woman ascends the stairs she becomes aware, though late, of her cruel fate. It’s the Penrose Stairs of bleakness, betrayal and enlightened stoicism that pushes a woman to embrace the futility of her ascent.

When a woman ascends the stairs of the bars in Tokyo’s iconic Ginza district, she sets foot into a male-dominant space of middle-aged, white-collar workers. Here, women are reduced to a commodity, placed in a social marketplace for reciprocity. They put their beauty and cordialness as a form of entertainment, and often they are highly sexualised and constantly objectified for pleasure. In this world of neon lights, the patriarchy ensures that a limited no. of women ascend in the social strata to either fulfil men’s sexual desires or the non-sexual ones as well, i.e., their loneliness, emptiness, and life’s frustration.

One such hostess in a bar of Ginza district is Keiko, played by versatile and charismatic Hideko Takamine, one of Naruse’s favourite actresses. She is a widow who pledged not to remarry in honour of the loving memory of her late husband. When taunted that her husband did not look handsome, she quickly festoons her late husband as a kind and humble-some individual, and that speaks volumes about her character. What pushed her to take up a job in a bar is her weak financial condition. Given the limited option the post-war Japanese society had to offer, she chooses to work as a hostess in a bar to support herself.

Irresistible Keiko and her contracting surrounding.

Keiko is beautiful, charming, and most importantly, she is polite. Unlike her other colleagues working in the bar, she refuses to sleep around or engage in any venereal activity to make that extra buck. She is a traditional woman by her choice, but not in the archetype manner and rather very much rooted in the reality of the 1950s, coming from a modest background to make a living in the increasingly modern society of Tokyo.

Keiko holds her moral and character above her financial predicament. The men around her find it challenging to woo her, seduce her, and in the process invariably hurt their supposedly hallowed ego. This indirect provocation to masculinity shifts the gender power dynamic, making Keiko a lot more irresistible; it makes her pièce de résistance in whatever bar she goes.

Her morally upright character & self-preservation contrast with the stereotypical bar girl, who practices monetary libertine and offers themselves at the drop of a hat. In one episode, she is offered a donation to open a bar in return for sexual favour, to which she outright declines. But her young colleague Junko (Reiko Dan) grabs the opportunity to improve her economic condition. The entire episode is disgusting in the way these men treat the women, like disposable objects. What’s even more sickening is that men haven’t changed since then, and perhaps got worse.

Naruse intensifies this contrasting characterization of traditional (Keiko) meets western-influence (bar girls), by deploying the sharp black-and-white visuals, the meticulous set design is filled with a Jazz score and a tantalizing bar. Naruse’s Ginza district is an extension of economical and cultural development happening in Tokyo. The shallowness of this commercial entity contrasts well with the sumptuously written characters in desolation. The blocking and editing invokes the sense of discomfort Keiko feels deep within; however, she maintains a staunch position in her work ethic.

The stairs go nowhere for Keiko.

Keiko is hit with a dilemma when she approaches an age, where she thinks she might not be desirable in a bar since her ‘exterior’ beauty might fade away. Her concern is legit, as the hostess business is all about the young and beautiful. She is left with two options to choose from, either to start her bar that will require a vast sum or get married as means of economic survival. One choice offers financial uncertainty and potential moral burden, while the other offers security, financial stability and possibly tranquil domesticity at the expense of independence.

Her first choice is to open a bar, which will ensure to keep her vow intact and not let herself tie down to another man. This possibility presents its challenges. Keiko will need a sponsor to start a bar which challenges her vow as she is expected to become the patron’s mistress. To circumvent this unpleasant compromise, she tries to raise the capital through subscription from her regular customers. However, the stairs take her nowhere. She is reminded, often politely, that her value and character don’t matter outside the bar. The lack of any interest in her business asserts the subjugation at the hands of their customers.

The news of the suicide of her former employee Yuri further debilitates Keiko’s ambition. Yuri resigned from Keiko’s bar to open a bar of her own. Weighted down by insurmountable debts she incurred to open a cocktail bar, Yuri ends her life. Devastated by this, Keiko becomes more than a little doubtful of her prospects as a bar owner and mulls on the new business idea.

She finally resorts to her last option and accepts the proposal of a mild-mannered, if slightly dull, Sekine (Daisuke Kato), who treats her as his equal, or at least pretends to. Her fate always eludes her. During her discovery of Sekine’s deception, she learns how miserable, disempowered and maltreated his wife is (the detail which he has hidden from Keiko). Sekine’s wife’s deplorable living condition despoils the illusion of finding financial stability in the marriage. But what proves to be the final nail in the coffin is Mr Nobuhiko Fujisaki’s (played by Masayuki Mori) weakness to act on his will. The only person she bares her soul, without concealing her emotional vulnerability, lacks the courage to break up his home for her. She finds the only consolation when she sees the slightly repressed plight of Fujisaki’s wife, who remains unaware of Fujisaki’s doing, and there’s hardly any sign of marital bliss.

As all the men in her life have either deserted her or disappointed her, Keiko seems to be just where she started, ascending the stairs with a smile fixed on her face, while being completely aware of her state and prospects. However, it’s elusive whether the ascent is based on an unfulfilled desire alone or a devastating realization of how marginally she has been reduced. Either way, Naruse leaves us with a protagonist, who in his words: “If they even move a little they quickly hit the wall.”