“Y’all wanna hear a story about why me & this bitch here fell out??? It’s kind of long but so full of suspense“ And then a laughing emoji followed by a crying emoji. Exactly how the 148-tweet long thread of Zola and her sex trafficking narrative kicked on the 27th of October, 2015. Needless to say, this thrilling and provocative reality-stranger-than-fiction became a rage and if you are a Twitter follower since the early years of the last decade, chances are that you have already read about it all. American writer-director Janicza Bravo adapts this free-style thread into a ninety-minute feature film with the gloriously rich A24 tag. The results, though not seamless enough, are always interesting.

What the film does is give the thread a sense of artistic fluidity. The rusticity of lingo is left where it was, and there are no attempts made to refine the various audacities of the original thread. The minimalistic indie flavor and its blend with bombastic colors are spontaneous and quite crazy at times. The five credited writers are successful in bringing out the thematic pertinence and artistic cleverness from A’Ziah King’s experiences, which is laudable. The characterization here is not particularly difficult to warm up to, which is a big plus. The crazy pulp title design delivers because it deceives you into a positively alluring trip.

The technical qualities, like in most of the A24 films, are efficient. There’s something to be said about how the ingenious indie storytellers extract the trademark “vibes” from cinematographers who haven’t done such work previously. I say this because the cinematography by Ari Wegner (whose previous credits include Lady Macbeth and In Fabric) is wholesome and does complete justice to the world-building that the original thread did. The editing skills of Joi McMillon and the production design by Katie Byron is expertly in place. 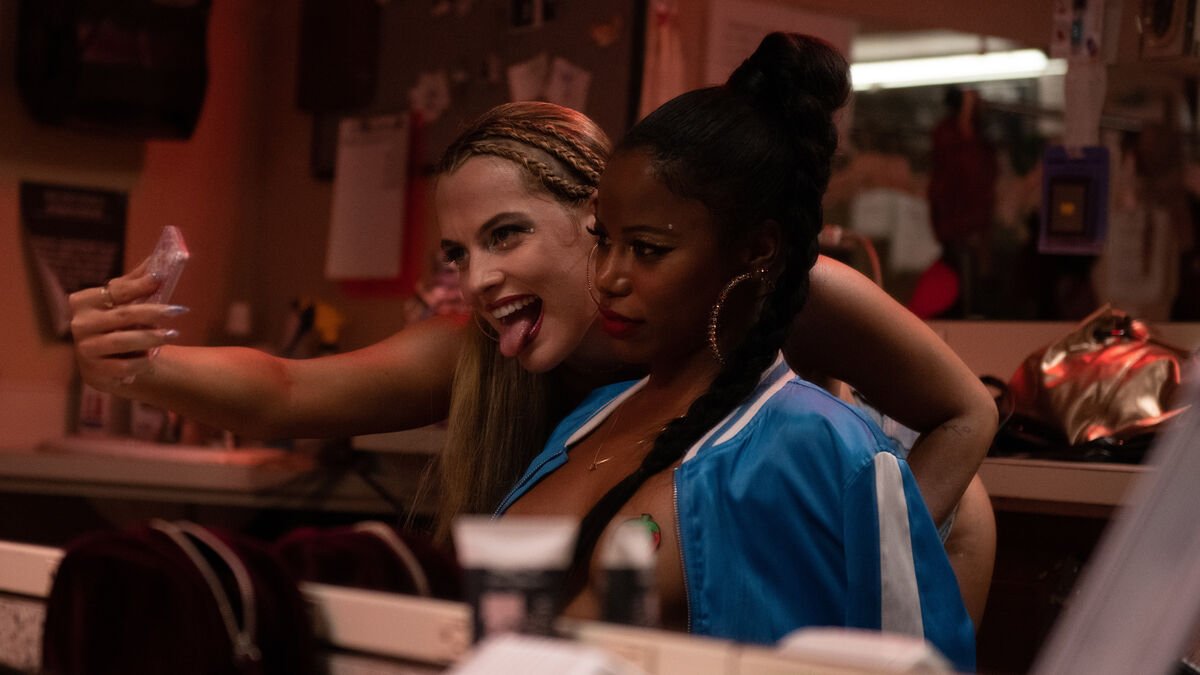 The performances by the two leading actresses are exceptional. Tyler Paige, who was previously seen as the sensual, terrific narrative device Dussie in Ma Rainey’s Black Bottom is at the top of her craft here as Zola. Her rendition of the true-life character is sellable and believable, often moving at times. Riley Keough is almost as cool as Stefani, and the film finds her priceless in the slighter sequences. Not many performances of the film have as much heft and charm.

The film is designed and structured like social media. Filmmaker Bravo fittingly makes you feel like you’re scrolling and reading through the film. It lays everything bare – the dusk laden with bewitching color and the extrinsic coolness has something endearingly personal about it. But at the same time, it also seems convenient and at home with its exciting atmosphere, technicality, and plot. So much so that the director seems to lack the sharpness it could have had. At times, the writing doesn’t have enough clarity about its liberties (if any) and something truly feels blank or rather astray about the progressions.

However, thinking back, Zola’s material, although has enough matter for a clever case study, isn’t nearly enough for making the film thrive. Given the technicality involved, the focus on a new prospect could have made the film a little more tighter. Given the genuinely fascinating turns of the account though, and with such impressive originality involved, the weight of the plot, which some of us have known for the last six years, takes a toll on the film itself, which is not such a good thing after all.

But if we sum up, Zola still calls for a watch. It’s a pretty polarizing film. It might resonate with you a lot more than it did with me. There’s crackhead originality here and a lot of heart to appeal to a millennial audience. It isn’t lackluster by any measure. It’s just that something truly lacks beneath the luster which will be evident for me on further rewatches.

ZOLA HITS US THEATERS AND VIRTUAL CINEMAS FROM JUNE 30.