Director and Writer Antonia Campbell-Hughes explores violence, self-harm, and sexual gratifications, or the lack of it, in an ever so palpable but never-exploding tale, set in the lush countryside of Ireland. “It Is in Us All” is a slow-burn thriller, if we go by its outward appearance. Within that scope, Campbell-Hughes reflects on the compelling and complicating humane tendencies. Like the well-thought-out name of the film suggests, it is indeed in all of us.

The film starts with Hamish Considine (Cosmo Jarvis) returning to the house where his mother grew up, in Ireland. Hamish’ aunt, his mother’s sister, used to be the owner of the house before she passed away. But before the prodigal son could set his foot on his returning ground, he and his rental car meet with an accident. Hamish survives, with ‘minor injuries’. One passenger of the other car, however, was not that lucky. A teenage boy, succumbing to his injuries.

Related to It Is In Us All – The Unknown Country [2022] ‘SXSW’ Review: A Roadtrip across People and their Anecdotes in the Search of Meaning

All this happens during the first ten to fifteen minutes of the film. This is the beginning point of our character’s experiences and also the tone-setter in the film. Evan (Rhys Mannion), a teenage boy, unbridled and sexually curious, is another survivor of the crash, as he was in the car with the deceased boy. The blossoming of a friendship amidst the wreckage of emotional torment is the key point of the film, with the shadow of the departed looming over them. 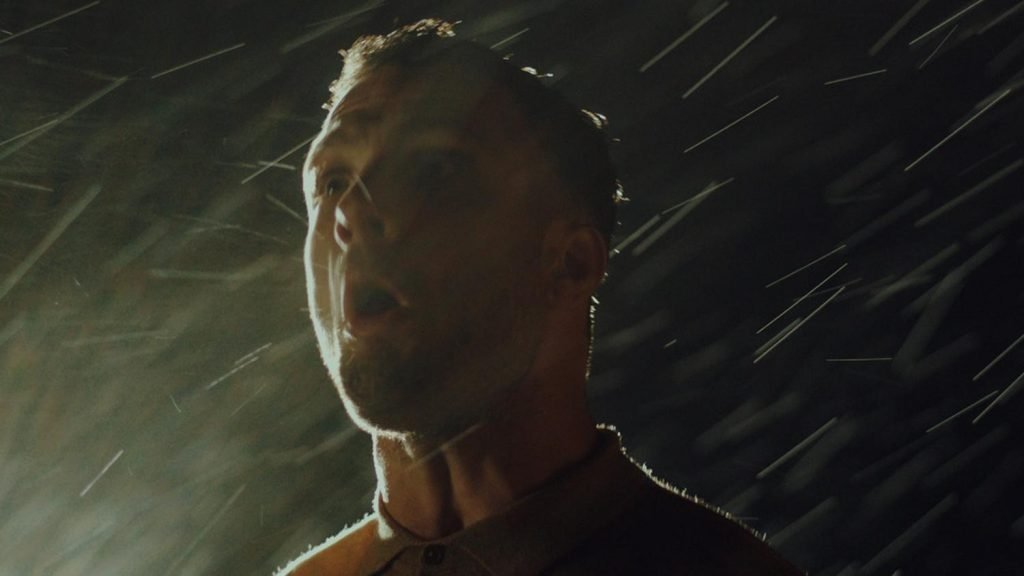 In the tone of the film, as well as in the synergy between the two dynamic leading characters, there is a certain similarity with Xavier Dolan’s intriguing psychological thriller, “Tom at the Farm.” The chemistry between Hamish and Evan might not be as palpably potent with toxicity as that of between the two leading characters of the Dolan film. But, the possibility of a hint of romance is always on the horizon for both sets of characters, albeit much more welcoming in the case of “It Is in Us All.” Also, noticeably both sets of characters are brought together by death. And that death haunts their entire shared experience. Along with that, there is the environment of the farm with a scene involving cows, as well as the energetic release of pent-up emotions in form of dance.

However, unlike “Tom at the Farm”, there is another angle here. It is not only the touch of sexual exploration and the unexpected friendship that is in us all. Campbell-Hughes’ story also explores the finality of death, and the whole new dimension of life lessons one gets once they encounter death but narrowly escape it. The film’s primary focus is Hamish, the seemingly uptight and fastidious business associate. The reason for his return to Ireland is to know more about his mother, who committed suicide some time ago. Boarding in the house where his mother grew up, Hamish learns newer information, not only about his mother but about himself as well.

Also, Read – Spin Me Round [2022] ‘SXSW’ Review: Alison Brie Finds Love And A Sinister Plot In This Comedy Mystery

The film is driven by the experiences of Hamish and Evan. Experiences and the slow unfolding of events. These experiences are not only taking the story forward but also establish the significant dichotomy of the two characters, which would culminate in their relationship’s inevitable end. The guilt of the death of the boy is much more prominent on the older Hamish than on Evan. Evan’s unencumbered and almost innocent curiosity towards the future is the perfect counter for the absolutely restrained Hamish’s dive into his past.

Cosmo Jarvis, whom we have seen in Peaky Blinders, is in top form here. As mentioned above, his Hamish is restrained and neat. But there is volatility within Hamish. Jarvis’ performance from the very beginning channeled a hint of that, ever so subtly. Rhys Mannion’s Evan wears his emotions on his sleeve. Mannion does an equally good job at displaying that. Claes Bang in an almost cameo role is noteworthy.

The other highlight of the film has to be the cinematography by Piers McGrail. It is not only the locale that are beautifully shot but each frame of the film is meticulously crafted. Campbell-Hughes’ direction and John Walters’ editing deserve praise, especially for always allowing a shot to get to its end more organically, with a couple of seconds more than usual. A trait we do not see often.

It Is In Us All screened at SXSW Film Festival 2022

The Unknown Country [2022] 'SXSW' Review: A Roadtrip across People and their Anecdotes in the Search of Meaning