‘When truth looks like a lie, a man’s to blame, Not to sit still, if he can, and hold his tongue.’

From a comparative perspective, it is interesting to comprise the mystical elevation of the maid (Laura Betti) in Pier Paolo Pasolini’s ‘TEOREMA’ as Moses ascendant to Mount Sinai – Platonist Christian scholar, Origen comprehends Moses’ act as uplifting to God. Indeed, the picture is just as esoteric as the director’s creative and private life. Pasolini is highly affiliated with politics, philosophy, poetry, and fundamentally mystical recognition of Marxism. ‘TEOREMA’ a ‘strong indictment of the bourgeoisie’[1] represents a Marxist mystical manifestation. 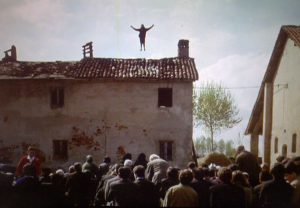 In 2009 a cinephile theologian, Richard Leonard publishes an academic book titled ‘The Mystical Gaze of the Cinema’ where he distinguishes Peter Weir’s work as an illustration of mystical gaze. He discusses the cinema of astonishment is what St Augustine of Hippo called ‘the lust of the eyes’. To endorse his arguments Leonard recites Tom Gunning saying: ‘the first spectator’s experience reveals not a childlike belief, but an undisguised awareness (and delight in) film’s illusionistic capabilities.’[2]

Film-faculty professor of Sussex University, Patrick Furey argues that the cinema offers and entry into another world, one that can upset the social conventions of this one.[3] Richard Leonard also perceives support from the theory of ‘carnival’ and ‘carnivalesque’ adapting the work of literary theorist Mikhail Bakhtin whose theory of carnival is based on his study of the popular religious festivals in ancient Greece, Rome and of the medieval period.[4] With these celebrations, the spectator accustomed to observation on ‘another world.’ The catharsis of carnival rooted in religious carnival had transformed in early cinema bringing together mechanical and mystical. Pasolini repeatedly embarked on the medieval period or ancient Greek encouraging the viewer to read controversial meta history.

French priest Henri De Lubac reviews the study of Origen exegetical. His theology is as a metaphysical system where gnostic and Medio Platonic concepts are prevailing over Christianity. According to Origen humanity is guilty because of the inferiority of the world. His study reveals that God created bodiless human beings whose sole purpose was contemplation. After losing eternity and embodying humanity moves away from the contemplation and becomes more and more material – that is definitely the main existential equation of Pasolini’s manifestations.

Related to Teorema – PASOLINI [2014] REVIEW: HIS STORY FINALLY BROUGHT TO THE US

‘The many mysteries of the film begin at this moment; the acceptance of a flat surface as three-dimensional, of a sudden action, scale, or set changes as ordinary of a border delimiting this fraudulent universe as normal, of black-and-white as reality.’[5] In its early years’ cinema was much alike Origen’s model of an individual – almost bodiless. The silent black and white cinema was representing an arbitrary reality while colorful talking films are trying to depict an authentic reality where diegesis is more embodied. Thus modern films are far from the impression of realism and released from magic. However, a monumental poet Pier Paolo Pasolini planted a mystical resistance in a social, cultural, and political curriculum that deconstructed and will confuse the conventions again as Terence Stamp’s mysterious guest in his ‘TEOREMA.’

The picture opens with a panoramic view of the factory and workers discussing with reporters somehow paraphrasing visions of The Communist Manifesto: ‘Your boss has given you this factory. What do you think? So he’s the main character in this story? Hasn’t this blocked all chance of a workers’ revolution in the future?’[6] The signified Marxist manifestation is altered with titles and enough time to imagine the Bourgeois as a socio-cultural phenomenon.

After the titles and voiceover sounding: ‘God led the people about through the way of the wilderness’ Pasolini reflects urban area with primitive cinematic deception utilizing the drab sepia. The camera explores the routine of people whose daily life will soon be rotting. But before frustration, the postman (Ninetto Davoli)[7] brings the letter to the bourgeois entropy reporting the visit of the mysterious guest. That is exactly when the impression of reality starts to decomposition hearing diegetic sounds and switching to a colorful screen denoting the beginning of ‘conceptual darkness.’[8]

Mysterious guest debauches the inhabitants of the house hierarchically[9] – from the maid to father. Each physical connection[10] is represented as mystical relation between spirit and God which are preceded by specific cultural, religious, social, or anthropological codes – while the unity of these codes are shackles that Stamp’s character unlooses them.

Betti’s character begins contemplating the guest while doing her housework. The wide-angle of the house is substituted with the middle-angle of the man reading Arthur Rimbaud’s book[11] while being observed by Emilia with a passionate gaze (the lust of the eyes). That is when metaphysical energy occupies space around Stamp’s personage stimulating the maid. She goes to the kitchen (!) looking for peace and praying in front of icons in vain. The man preserves Emilia from suicide triggering the opening penetration.

The second intercourse with young Pietro (Andrés José Cruz Soublette) is pictured as a visual dichotomy. There’s a work of contemporary art on Pietro’s side of the room meantime there’s a work of renaissance on the visitor’s side mirroring the inner history of characters. The shot is succeeded by a syntagmatic move showing the wall on Soublette’s edge exhibiting Micro-Earth[12] (Globe), a boat referring to freedom, and a cage alluding moral enslavement of the boy. Meanwhile, there’s a window on Stamp’s side as an entry to an authentic world.

The third ‘victim,’ Lucia (Silvana Mangano) – subordinated to material needs – is shaken during the observation of (anti)hero’s clothing and aims to overcome her mental gap touching them. Subsequently, she rejects material substance, dresses off waiting for mystical copulation in ecstasy.

Odetta’s (Anne Wiazemsky) sexual encounter also begins with Rimbaud’s metaphysical energy executing with freezing time.[13] She takes photographs of her father and the visitor, thus she freezes and reserves time.[14] The action is set in front of the house – the church of the bourgeoisie. Odetta leads the guest to her room browsing older pictures mirroring the reflection of the past.[15]

Finally, the visitor desacralizes father (Massimo Girotti) outside. Camera pursues the protagonists from almost the theatrical space (the house) with the luxurious car to periphery whereas he ‘perverts’ Girotti’s character.[16]

All denoted aspects here will affect the further evolution of the personages. Before that Davoli appears again mimicking tramp’s dream in Chaplin’s ‘The Kid’ (1921).[17] Now the visitor receives the letter and again image of Chaplin becomes the reason for another fundamental rearrangement.

The crisis starts with exploration. Odetta tries to determine the exact place where she took the photos of the visitor.[19] She inspects pictures seeing the representation of the divine world in a reflection of a reflection and is petrified. It is possible she achieves some uncertain level of contemplation albeit she is de spiritualized looking like an insensitive doll.

Pietro tries to sublime his post ecstatic trauma into art as his divine penetration was accompanied by the visual contradiction of renaissance and contemporary art. He draws abstract, amorphous images on glass[20] dreaming to develop a new language. At last, Pietro draws with his eyes closed and also reaches some doubtful degree of contemplation[21] however his unity is also too equivocal.

In the meantime of the attempt of the bourgeoisie to fulfill the mental loss with vulgar actions, Pasolini simultaneously depicts the ascetic way of working-class image Emilia. She abandons the service of the bourgeoisie returning to her roots – poor suburban neighborhood. Her profile resembling the cover of Rimbaud’s book devotes her with metaphysical power. Calling of church bells assist the trauma of bourgeoise. When Emilia finally uplifts, thus reaches the peak of ecstasy screen reveals the signifiers of the sound (bells). 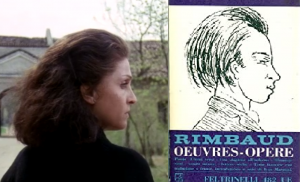 In the end old peasant (Susanna Pasolini) helps Emilia burying herself in saying her tears are teardrops of happiness. Here, Pasolini deploys the idea of universal salvation. A micro apokatastasis comes to an action meaning the return of a single micro cosmos (Emilia) to the divine and into the unity of the world.

The Grammar of Myths

Neil Hurley was the first scholar to explicitly link transcendence with film. Two years before Schrader, he argued that films would provide for future generations ‘the grammar of myths.’[22] ‘The film spectacle produces a strong impression of reality because it corresponds to a “vacuum, which dreams readily fill.’[23] Pasolini was pretty much aware of the anatomy of the vacuum where he placed new (authentic) heroes and saints the proletariat – while demonstrating rotting dominant classes in his films it is typically the burden of working class to restore the disfunction of social harmonization. Pasolini’s filmography is a celebration of unadorned, radical communism!

‘The Communists disdain to conceal their views and aims. They openly declare that their ends can be attained only by the forcible overthrow of all existing social conditions. Let the ruling classes tremble at a Communistic revolution. The proletarians have nothing to lose but their chains. They have a world to win.

Working Men of All Countries, Unite!’[24]

[4] Bakhtin, Mikhail; Rabelais and His World;

[6] ‘A part of the bourgeoisie is desirous of redressing social grievances in order to secure the continued existence of bourgeois society…[]… It is summed up in the phrase: the bourgeois is a bourgeois – for the benefit of the working class.’ – The Communist Manifesto; pp31-32; Conservative or Bourgeois Socialism; Marx, Karl; Engels, Friedrich;

[7] With the representation of Davoli, Pasolini interconnects to the first leftist and icon of the working-class in cinema – Charlie Chaplin. In ‘The Canterbury Tales’ rebellious Davoli looks like the first sketches of Chaplin with his behavior, or social status. It is symbolic that he brings the letter.

[8] Pseudo-Dionysius defined the school of ‘apophatic mysticism’ as a conceptual darkness, where one empties the mind to encounter the OTHER; The Mystical Gaze of the Cinema; Leonard, Richard. P4;

[9] In ‘Teorema’ hierarchy is highly emphasized. After Emilia leaves the house, family gets new maid looking like the previous one and her name is also Emilia.

[10] Origen defines the loving affair as mystical act between GOD and spirit or Jesus Christ and the church.

[11] Fundamental matter of Rimbaud is to reconstruct the world and to return to the primitive desires.

[12] According to Gregory of Nyssa each human being is micro-cosmos and an icon of God so their nature is theocentric. Here Pasolini articulates that our mental system is as countless as the universe.

[13] ‘In the event of a mystical encounter the individual or the group commonly report that ‘time stood still’ or ‘it was as though time was suspended’ or ‘I went into another world’—eternity, samadhi, nirvana.’ The Mystical Gaze of the Cinema; pp 73; Leonard, Richard;

[14] In his article on the rhetoric of the image, Roland Barthes notes when we look a photograph, we do not see a presence “being there” for this definition is too loose and can be applied to any copy—but a presence that “has been there.” Film Language and a Semiotics;pp 22; Metz, Christian.

[16]With this act Pasolini points out to expel bourgeoisie from safe area to transform the socio-political situation with fundamental revolution.

[17] In that dream, people are winglike angels living in a tramp’s pattern of heaven where evil distorts the dream.

[18] All the intercourses with the visitor were strong yet temporary ecstatic connections;

[19] It is well recognized that the churches are usually built where mystical encounters occurred;

[20] ‘The brilliance of this inner vision is like that of an infused light coming from a sun covered by something as transparent as a properly cut diamond;’ St Teresa of Avila, 4, 205;

[21] ‘Etymologically, mysticism is related to the Greek word ‘muein, meaning ‘close the lips and eyes’.’ The Mystical Gaze of the Cinema; pp3; Leonard, Richard;

Forever Out of My League [2022] Review: A Sweet, Disjointed Film About Friendship, Love, and Terminal Disease