Lauren Hadaway’s first-time directorial feature ‘The Novice’ is a bold and unapologetic coming-of-age story that is equal parts a sports film focusing on the physical sport of rowing and a psychological drama about an obsessive-compulsive protagonist who pushes herself the hardest because of her unhealthy fixation for excellence. This genre-breaking electrifying thriller, based on Hadaway’s own personal experience as a competitive collegiate rower, explores the complex themes of the dark and dangerous downsides of perfectionism and the unfathomable price one has to pay in an increasingly competitive and cutthroat world.

This highly character-driven linear narrative, that centres on the performance of Isabella Fuhrman (Esther in Orphan and Clove in The Hunger Games), follows Alex Dall, a queer college freshman who joins her university’s rowing team with a seemingly impossible desire of making the top varsity boat. In her reckless and all-consuming pursuit of supremacy and merit, the physically and mentally taxing training takes ascendancy over normal life, leading to her undoing and self-destructive tendencies.

One can obviously recognise the narrative similarities to films like Damien Chazelle’s Whiplash and Darren Aronofsky’s Black Swan and The Wrestler, and David Fincher’s The Social Network for the lead character’s single-minded professionalism and obsession for greatness. However, this Tribeca Film Festival Winner is unique and distinct for the unwavering and persistent push and pull strategy as Alex drives herself beyond the threshold to the point of no return and then picks herself back up off the floor. 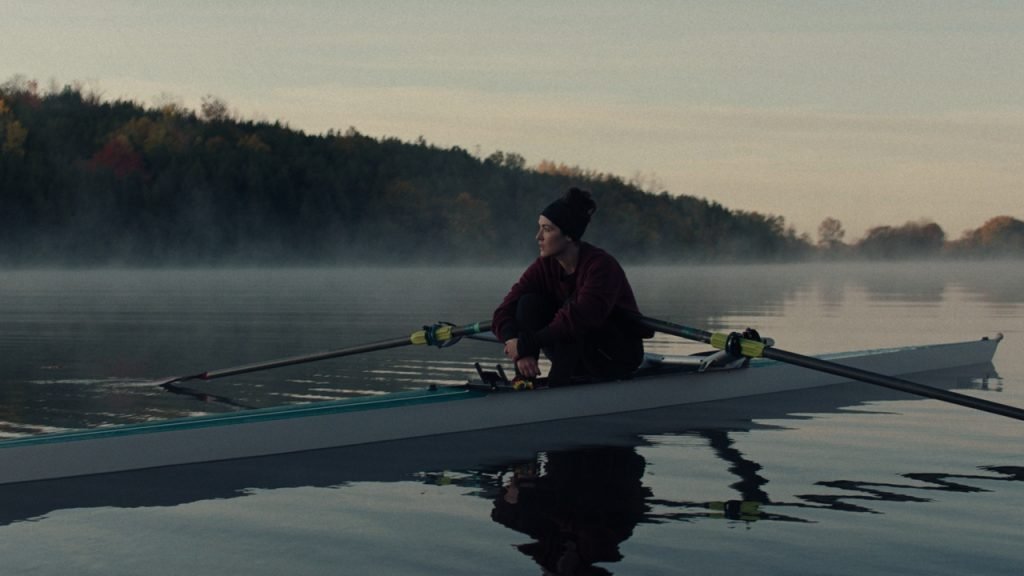 Perhaps all you need to know primarily to deeply understand the psyche of Alex Dall is that she resists anything resembling a half-measure and is excessively obsessed with outperforming her classmates or teammates. Her compulsive desire “to be best at any cost” is witnessed in the opening scene when sitting in a nearly empty lecture hall, she utilises every second of her allotted time to take her physics test several times, scrutinising it over and over for catching mistakes before turning it in. When her annoyed and bewildered teacher’s aide Dani (Dilone) asks her, “You finished first, why did you take it twice?”, she says it is to make sure that it is right. And we realise that, for Alex, there is nothing, nothing beyond her hard-won accomplishments.

Alex Dall sees everything as a challenge and that is the singular reason for her being a physics major despite it being her worst subject. Even braced with a full-ride scholarship, she is preoccupied with getting straight A’s because she perceives every other person as a competition or opposition. When her fun-loving and carefree friend Winona asks her to loosen up, she always makes it clear that even though she works the hardest, she is not necessarily the best. And she believes quite blindly that those who work hardest deserve the greatest rewards and not necessarily to the inherently gifted or the smartest. Her rationale for her belief has its foundation in her past and it complements richly in apprehending her actions.

When Alex decides to join the university’s Ravens rowing team for women as a novice, despite not being adept on the water, it naturally becomes her new challenge and obsession. She unceasingly repeats Coach Pete’s chant of “legs, body, arms, arms, body, legs” like a mantra, absorbs every technique for best results, scribbles notes to put her in the right mind space letting the information play on a loop in her mind. But when she finds her new opposition in another novice Jamie Brill (Amy Forsyth) who is praised as “a natural” and “the best novice”, she embarks on a mission to come out of the shadow and to outrank her and to become the best rower, no matter what. Alex is anything but mission-driven as she considers the drunken hook-up at a frat party to be an obligation or an experience she has to cross off from her list.

Set in the training room and the watery world of rowing, Alex pushes herself beyond the boundaries of reason and sensibility. She intensely works out until she pukes and becomes so exhausted that she unintentionally piss her pants during her training. She becomes her own nemesis as she throws caution to the wind in her self-oriented and self-directed training methods. She also acknowledges her sexual attraction to the funny and relaxed TA Dani when she attends the nightclub where Dani performs as a moonlight singer. Dani becomes a romantic interest as well as a shrink, with whom Alex opens her heart and Dani, in turn, extends care and support, though it proves counterproductive in her fanatic zeal for rowing.

With Alex toiling hard to supersede Jamie, she barely eats or sleeps and stops seeing her relaxing in her dorm. She moves from practice to class like the wind, darting back and forth, straining physically and psychologically. She rows throwing her entire body into the action without restraint, rarely stopping to catch her breath. She even experiences delirium when she has visions of crab being dropped into a pot of boiling water when she loses control of her oar, serving as a metaphor for her pain of failure and reduced awareness. But she takes no heed to the advice of her coaches to be careful and considers it as an insult to her perseverance and trains hungrily like it is her life mission. At times, her self-harming ways makes us contemplate whether she is aiming for embracing death as she refuses to break free or break down from the punishing knot of her compulsive behaviour.

Related to The Novice – The Best Sports Films of All Time

In a harrowing scene, Dani begs her stubborn girlfriend to stop rowing seeing her incessant physical and emotional struggle while crouching down in the bathroom. We see Alex in her lowest low with open wounds on her palm, growing cuts on her rib cage and bruising on her upper thigh. But her fixation on rowing acquires primary importance than her relationship with Dani and thus it is more or less a love story between Alex and rowing than a love story with Alex and Dani. The dual relationships of both Alex and rowing and Alex and Dani which had started in romantic and inspiring tones end up crumbling in a twisted and toxic breakup in an unexpected suspenseful climax.

Isabelle Fuhrman as the proxy of Hadaway is electric and taut in her masterful performance who appears in about every scene. Fuhrman’s Alex is as psychotic as Esther in Orphan and she owns a screen presence as an overachiever who is climbing and crashing, rising and falling with a rare blend of insecurity, confidence and determination. Hadaway’s camera and her vision stay close to Alex as it captures every aspect of her life. Alex can be compared to Nina in Black Swan and Andrew in Whiplash in their efforts to reach perfection, but unlike Nina, Alex is not completely antisocial and keeps herself at a short distance from slipping into madness. While Black Swan and Whiplash are portraits of tormented artists achieving excellence and justifying their self-destruction, Alex in The Novice is unrewarded, but as we are rooting for her to realise her limits and boundaries, it turns out to be a triumph and catharsis for both the character and the viewers.

How much of what makes you human will you sacrifice for a desire to truly excel? This is the ultimate and pertinent question Hadaway addresses in The Novice which is a study of misery and cruelty to one’s own individual self in one’s quest for transcendence. It also becomes a brilliant social commentary in this hyper-competitive world where everything depends on becoming victorious and making one’s own mark by psychotically pursuing goals at a maddening pace without living their lives. It also explores the loneliness and the lack of meaningful connection and human interaction that accompanies such extreme and pain-filled endeavours.

Hadaway’s influence on directors like Tarantino and Chazelle is evident in her craft as she has succeeded in creating a visceral window into a cutthroat world of dangerous competition with her bold direction and dynamic editing. She grabs our attention throughout the film with stylish cinematography and a seductive soundtrack which grabs hold of our attention throughout the film. Cinematographer Todd Martin complements the visuals with a green tint that creates an illusion of a watery surface of rowing and Alex Weston’s music adds mystery, thrill and chaos into the mix.

Hadaway’s need-to-succeed moments are fully realised and exceptional as it is loaded with ceaseless energy and momentum. Hadaway also heralds as a new voice in queer romance as she captures their attraction, falling in love, and fallout in near-perfect authenticity. This intense and thought-provoking narrative that looks enormously at the universal human nature of succeeding at any cost is a lesson at putting a full stop to your obsession when it becomes an uncontrollable destructive force.

Anonymously Yours [2021] Review: All Things Predictable and Sweet in this Mexican Teenage Drama

10 Films to watch if you like The Unforgivable on Netflix