Swedish film-maker Ruben Ostlund has quickly emerged as one of contemporary world cinema’s most distinctive voices. As a wonderful satirist, who works in the sphere of sociology, Mr. Ostlund has made darkly funny dramas that slyly observes the human behavior (especially the Western bourgeois society) under strain or threat. But the director’s deconstruction of the privileged urban characters’ ego, prejudices, and idiosyncrasies consistently defies easy identification, and in turn elegantly nudges us to confront our own values and our vision of morality. After scrutinizing the societal expectations of masculinity through the story of an alienated Swedish family man in Force Majeure (Turist, 2014), Ostlund, for his fifth feature-film, The Square (2017) delves into the eminent modern art scene to expose the discrepancies between flamboyant, utopian ideals and wobblier, wrongful actions. Perhaps, like Ostlund’s previous movies, The Square is not an easy movie to watch or enjoy. The film suggests how our liberal notions and capacity for empathy isn’t enough to keep us away from our baser instincts and absurdities; or how simple dispute or duress could divulge our animal drives. And, the director sort of evokes this theme starting with his viewers, testing us how much of this splayed out narrative we could take in before sighing with frustration and anger. Ostlund has had due success with this approach, since the gleefully disorienting movie experience has drawn out a lot of vitriolic reactions from cinephiles, making it the most divisive movie of 2017 after Darren Aronofsky’s mother! (I didn’t consider these movies to be masterpieces, but they are definitely worth experiencing). 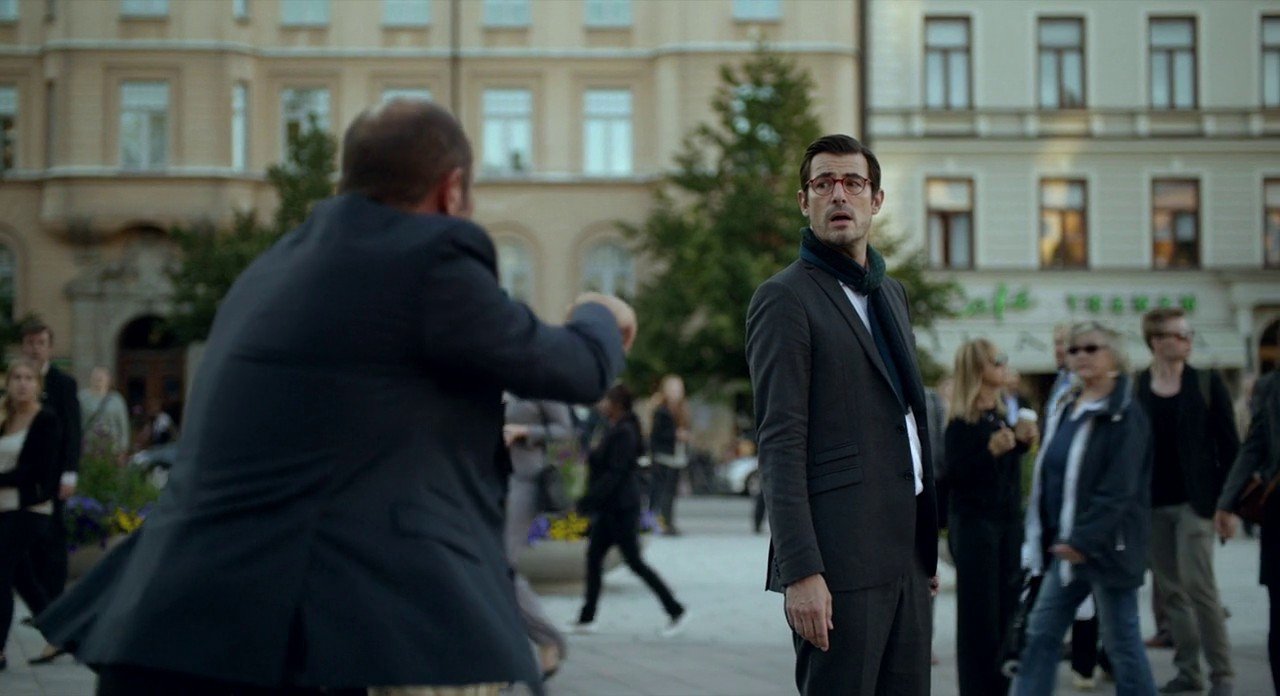 “The Square is a sanctuary of trust and caring. Within it we all share equal rights and obligations”, reads a plaque in front of the art work  placed at the fictional X-Royal Museum in Stockholm, formerly a royal Palace. We might have walked across traffic intersections day-to-day without giving much thought to the pedestrian foot paths. Christian (Claes Bang), the fictional art museum’s curator and the movie’s protagonist, remarks upon the zebra-lined stretch of pavement as a ‘representation of contract between drivers and walkers, in which the former agrees not to run over the latter’. The new art installation ‘The Square’, similarly designed to focus on the surface, proposing an aim to create an illuminated little space (an actual square carved into the middle of the palace’s courtyard), within which all people are expected to treat one another with trust and caring. However, Christian and the characters strolling through the art museum are unable to live up to the art’s standard. Or the art work shows how humanity is at odd with itself, so that its virtues can only be exercised within a small, four-by-four meter space. Christian’s ability to understand the right & wrong, cultural expectations, and interest in producing clean self-image often contradicts with his uncaring attitude and unsavory instincts. Figuratively, he lives in squares. The earnest, charming, high-minded side of Christian is compartmentalized into one, whereas his worse parental instincts is confined to other, followed by his messy sex life, etc.

Christian’s quality of being abstract and ideological has been a strong asset for filing in the curator’s job. When we first see him he goes through an awkward interview with a  American journalist Anne (Elisabeth Moss). She asks him about an artist’s statement which includes words like ‘exhibition/non-exhibition’. He voices out an explanation using jargon that sounds more weird and absurd, but the insufficient description doesn’t pose a threat to his work. However, his lack of empathy and compassion – things the rich and refined museum community stands for – blocks his path in real-life squares. The first of which happens when Christian stops in the middle of a busy town square after hearing a woman’s wailing. He sort of helps the woman fleeing from her man, only to discover later that he’s been the target of a detailed con. His wallet and mobile phone goes missing. He decides to retrieve his things by taking the bad advice of a sub-ordinate. Naturally, things don’t go well. The total absence of trust and honesty plagues Christian’s other facets of life too. His delusion of nobility plagues everything, including the fathering instincts (he’s blessed with two beautiful daughters). This indelible disconnection of Christian is further superbly expressed in the scene he has sex with Anne, which is neither businesslike nor emotional. What follows the sex is not post-coital reflection or closeness, but a bizarre argument over condom disposal. Adding more to the disastrous path is Christian’s rushed approval for an atrocious, viral PR campaign. All this may seem to make The Square an exacting treatise on social contract and human interactions. But it also contains moments of peculiar, subtle comedy as the unflappably calm and analytical Christian gets gradually encompassed within the sanctuary of chaos.

Despite examining Christian’s condescending and incensed behavior, writer/director Ostlund largely eschews judgmental tone. He doesn’t treat the character as a specimen to be poked and dissected, but rather allows us to confront our own values through his actions or in-actions. Christian thinks of himself as a decent guy. He believes in liberal, progressive social theories, gives money to beggars & homeless now and then. Nevertheless, like every one of us, Christian remains selective in concocting an image of himself. He doesn’t consider his utter disconnection with reality and privileged existence, except when he is cornered by his mistakes. Hence, Chrisitian’s inability to live up to the challenge of the artistic work’s ideals (things which he champions) pretty much reflects our own and our society’s shortcomings or perpetual failures. By observing the foibles of Christian and his cohorts, we are looking at our deeply ironical, culpable nature. 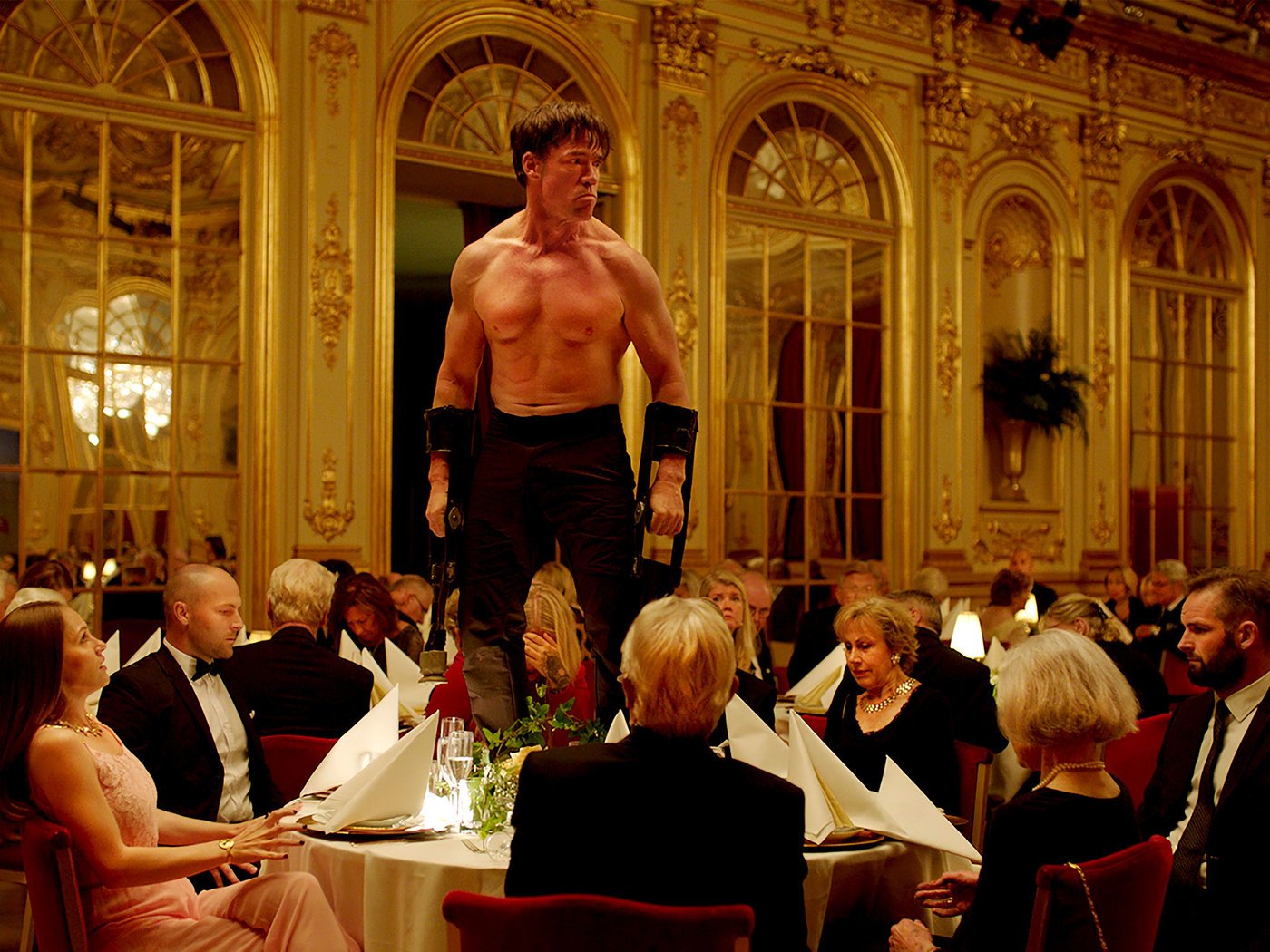 In the hands of other film-maker, The Square could have been a straight-forward character study. Even though the narrative concentrates on one person’s brief chaotic phase in life, Ostlund cooks up collection of vignettes that can stand on their own as separate stories, and consequently provide larger context. Ostlund writes and frames scenes that are capable of standing on its own. In fact, the most-talked scene of The Square has nothing to with the characters in the film. It’s the bravura piece where motion capture artist Terry Notary plays a Russian performance artist at the museum’s fancy dinner party. The routine starts as a comedy with the artist pretending to be an ape. But slowly as he leaps atop tables and relentlessly teases the patrons, the atmosphere becomes terrifying. The scene culminates with a brilliant shot, potently showcasing how little provocation is enough to turn the seemingly polite members of the society into dumb, raging beasts. Then there’s another thematically connected vignette involving a foreign artist (played by Dominic West) whose talk is frequently interrupted by an audience member with Tourette’s syndrome. As much as we like to highlight humanity and liberal-minded goals, the sequence shows how easily we get uncomfortable when discrepancies invade the calm surface (interestingly, it’s not played for laughs, since we too feel uncomfortable because of the man with Tourette’s).

It would definitely take more than one viewing to get to The Square’s extra layers of symbolism (the first I watched it in a film festival, where the audience restlessness and mocking nature robbed off my experience). The one thing I found fascinating is the way Christian is placed in the middle of squares whenever he is in the middle of perplexing situation. Ostlund also show his funnier side in certain situations, while judiciously exercising ideas and symbolism. In this vein, Anne’s confrontation of Christian is memorable. It happens in a gallery where an art installation of huge piles of chairs is seen in the background. The chairs systemically make a loud, rattling sound which adds a lighter tone to the bitter conversation ensuing in the foreground. Ostlund’s positioning of the city’s homeless and beggars often in the corner of the square frame are other intriguing visual maneuvers. The Square does seem a bit overstuffed with ideas, and not as precise as the film-maker has been in Force Majeure. It juggles between theme of masculinity, self-contradictory high-art, barriers in social interactions, etc. But at times it looks confounding or I don’t what I should exactly experience. It could be further added that parts of the narrative looks more fascinating to interpret later than experiencing it firsthand. The turn towards darker territory with the young boy, accused of being a ‘thief’, felt stuffy and kind of overly underlines the themes. Nevertheless, the narrative overload and emotional shortcomings doesn’t impair the slew of remarkable questions it raises: about our individual pressures which doesn’t allows us to step out of our own selves to reach out to other people; will we be humane, altruistic if the societal and cultural contracts are stripped off; where should we delineate the lines between individual and society, and who could/should actually do it. Of course, the movie doesn’t provide any clear answers, but the questions itself are bewitching.

Unsettling and funny in equal parts, The Square (151 minutes) ambitiously glimpses at humanity’s warped reflection of itself, and at the same time pitilessly roast the blatant moral hypocrisies of the contemporary art world.