Not many people would know about the Mondo films from the 60s, but a lot of them would still remember the slight, polarizing Paul Thomas Anderson 2014 feature “Inherent Vice.” So, if you have seen PTA’s freewheeling Joaquin Pheonix starer, you can assume the psychedelic trippiness of the mondo films that somehow inspired it. Since then, the mondo sub-genre has seen a kind of renaissance if you may. Janek Ambros’ “Mondo Hollywoodland” is another addition to that cannon.

A straight-out reworking on the title of the 1967 cult-classic Mondo Hollywood, Ambros’ film kicks off with the 5 letter word being the center of attraction. The narrator, who is also supposed to be an extraterrestrial being from the 5th dimension is seen scavaging the streets of L.A., trying to find the meaning of the word “Mondo.” To clue the readers in, Mondo was actually a sub-genre of indie cinema that emerged in the 60s. Mondo Cane (1962) can be called the official name-bearer and mother of the genre.

Basically, these were films that did the unimaginable feat of hybridizing exploitation films with an observant documentary style. They were goofy, odd, and followed a sort of vignette-styled narrative that did not make sense when consumed without enablers. Ambros’s film is no different. His homage to the 60s era rightly begins with the search for the meaning ‘mondo.’ It’s almost as if he is trying to simultaneously reintroduce it, and build a new foundation for others to follow upon.

The 5th-dimensional being is supposed to represent the audience who is completely oblivious to this journey he is about to take us on. Set in present-day Hollywood, the film can be broadly divided into 4 chapters. The first serves as a prologue where the narrator visits our central character Boyle (Chris Blim) – a magic mushroom dealer suffering from an existential crisis because of his lost cat. He has been directed by someone on the streets that Boyle has the answers to his quest.

Boyle affirms that he does know the meaning of ‘mondo,’ and that the narrator needs to take a cosmic journey with him in order to understand it. Broadly speaking, the following three-chapter are about three different groups of individuals who inhabit L.A. The land of artists is also filled up with people who have to struggle to make ends meet. Boyle tells the narrator that mondo encompasses the collective being of three cosmic tribes that go by the name ‘Titans,’ ‘Weirdos,’ & ‘Dreamers.’

Big, stylized fonts introduce us into the first chapter which mostly focuses on Boyle’s friend – a coked-up Hollywood producer trying his best to stay sane as a Disney-channel star and her agent are in fits because she supposedly grew a conscience and doesn’t want to do sci-fi bullshit. There’s a part here where the producer arranges a meet with the actress to mansplain her how she should be happy that she has a paying job. The angsty girl, in turn, gives him a lecture about how she doesn’t have to make money as she can do that by even posting a picture of her sleeping on Instagram.

The above interaction is probably the funniest bit in Mondo Hollywoodland – a film that tries really hard to bash us up with heightened visuals and strange characters. It makes me extremely sad to report that nothing else here sticks. The second chapter that follows a hippie couple – one of whom is a tarot reading community organizer wishing to evoke a political movement, is just downright uninteresting and vapid. These characters who are closely associated with Venice beach and represent the counter-culture of art eventually offer total randomness that is just dull. 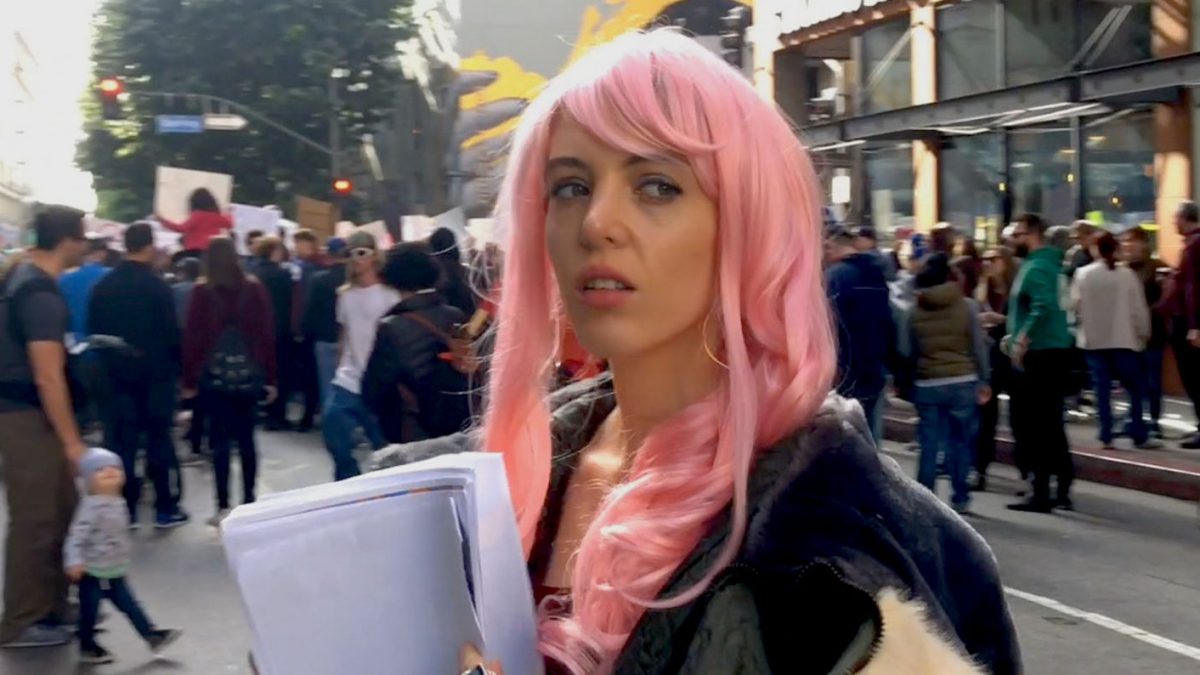 Boyle is the only character who connects most of the randomness in a very High Maintenance sort of way. Boyle’s neighbor (played by Ambros himself), who is an important character here gets more screentime than he deserves. The segment that involves a car-bombing is so lazily done that I sat there cursing the editor for not taking a little time out to remove the extra ambulance clutter.

The film redeems some of its missteps in the third chapter, thanks to a somehow moving portrait of a third-generation struggling actress. The part shows that director Janek Ambros has a stronger hold on the dramatic elements of his tale, rather than the cluster that he makes out of the funny tone that he is going for. While he eventually ruins this absorbing moment with more randomness towards the end, I concur to my own assessment that Ambros should focus on conjuring drama out of his strange character, instead of turning them into single-note caricatures.

I also think that there is a potent satire somewhere beneath all the weirdness here. In some way, it takes a dig at the struggling class of actors, producers, and everyone else who lives under the flickering lights of L.A. These people are extremely lonely – cue to all the cats that they find solace in. I just wish the director made it a point to at least dive into some elements that really brought that to the foreground. Sadly, he doesn’t.

Shot on an iPhone and made on a budget of merely 10 thousand dollars, as a throwback and homage to the mondo film of the 60s, “Mondo Hollywoodland” may appease a select few viewers. For everyone else, the trippy, weird energy that Ambros is going for just comes off as lazy, insipid, and exhausting.