For this year’s Oscars, Jordan Peele and Greta Gerwig have been nominated for Best Director, despite missing out on such nominations in preceding ceremonies such as the Golden Globes, DGA awards, BAFTAs, et al. Much furore has been expressed over Peele and Gerwig in the awards season lead-up the Oscars, with many publications such as The Guardian and IndieWire bemoaning their lack of nominations, but apparently the agenda-pushing and dying art of film journalism does indeed have an effect on the awards season and who gets nominated (or even wins). Now the Oscar nominations are here, with Peele and Gerwig in the race with Guillermo del Toro, Paul Thomas Anderson, and Christopher Nolan.

Now it seems like the world of film journalism is in a state of glee having their preferred frontrunners make the nominations, all in the name of diversity. However, there seems to be some sort of issue with these particular folks receiving nominations, and it’s related to something much more interesting than simply their race or gender – it’s that these are two actor-turned-directors who have made their directorial debuts. Say what you want about the quality of their respective films and whether they are worthy of these Best Director nods, though it certainly sets them apart from the three other directors, who have each honed their directorial craft for nearly two decades. If you would think more would be written about the hard work these other three directors have made to finally reach Best Director nomination status, you would be wrong.

Many publications aren’t exactly taking this into consideration, except Sight and Sound, who make the weird comparison “to put this aspect into perspective, it’s the equivalent of Nolan getting nominated for Following, Paul Thomas Anderson for Hard Eight […] and del Toro getting a nod for Mexican chiller Cronos.” I don’t know about you, but these debuts rightly shouldn’t have been nominated for much, as they were impressive, yet confined break-throughs into the film industry whose succeeding films by these directors have been more awards-worthy. Maybe Peele and Gerwig got it more right than these directors on their first time, but they did have the assistance of a lateral career move, not a more struggling upward one.

Amidst the likes of these articles are a few eyebrow-raising statements. The Sight and Sound article also opens with this rhetorical statement “When the Academy of Motion Picture Arts and Sciences initiated its drive last year to make their membership more diverse, did it consider that the nominations for Oscars might become not only more inclusive of diverse talent but also far less conservative in taste?” – the rest of the article doesn’t clarify on what they mean by conservative and what might make this year’s Best Picture nominations unconservative. They also ask themselves “could it be that the newer members of the Academy have impeccable taste?” – if this is sarcasm, it’s lost on me.

They continue with instructing readers on how to think by announcing “you’d have to conclude they got the diversity element right”, which is untrue if you count Latinos (who make up as much of the US population as African-Americans, who are graced with only one nomination for del Toro) and the vast array of foreign films that are always snubbed at the awards season – not to mention the small amount of films getting nominated at all, with the likes of the overrated The Shape of Water greedily nabbing 13 nominations (aren’t there other films out there that deserve Best Original Screenplay or Best Supporting Actress more?). Since diversity literally means black and white to the film press, they are satisfied, but real diversity will never be seen at the Oscars. In the same paragraph, they claim this inclusion of these two directors make the Golden Globes look ‘out of touch’. If you don’t think Peele or Gerwig deserve these nominations, guess what, grandpa, you’re just stuck in the jurassic age, have fun trying to catch up to the 21st century.

Even more bafflement predictably comes from IndieWire, who commented “where the Golden Globes and BAFTA Awards have failed, the Oscars have succeeded” – succeeded in nominating who they wanted to have nominated, is what they mean. Given the subjective nature of film reaction, which extends to shiny trophy nominations, it seems impossible for any awards show to objectively succeed or fail, but IndieWire think otherwise in their didactic claims.

The Independent took the objectively in nominations even further, claiming these nominations of Peele and Gerwig were a “step in the right direction” (twice – quality reiterative journalism right there). The Independent also made the claim that it would’ve been unlikely even just two years ago that Peele and Gerwig wouldn’t have received nominations, assumedly due to their marginalising race or gender respectively. It’s an assumptive claim, but what The Independent are getting at is that it’s not the quality of the films that make them worthy of a nomination, but the cultural climate that surrounds these awards ceremonies.

This kind of sentiment is best explored in the last paragraph of the ABC’s article on the nominations – with the heading, “Who should win best picture?”, the author of the article simply refers to which film best exemplifies the culture of the filmmaking world, rather than what is actually the best film (here’s the actual quote if you don’t believe me — “this year’s best picture winner should be one that symbolises the actions of the past few months”). She suggests films like Lady Bird or Get Out for how culturally resonant they are, but completely ignores Phantom Thread and Dunkirk for obvious reason, spending no time on which film has been better made, which I was under the impression was the meaning of Best Picture.

Many publications, namely the aforementioned as well as The Guardian, have cringingly associated the lack of women nominations (specifically this year, Gerwig’s nominations or lack of) with the MeToo movement, which strikes me as sickening to tenuously connect a widespread scandal of sex abuse with shiny trophies. The media in the film world, who are both the vultures and the starving, recognize the MeToo movement only as a viral trend and will use its hashtag in any kind of association with women to garner higher visitation, no matter how vague the connection is. It’s a disgusting habit that will hopefully back-fire and sink the film journalism world further into the tarry pit it belongs in. 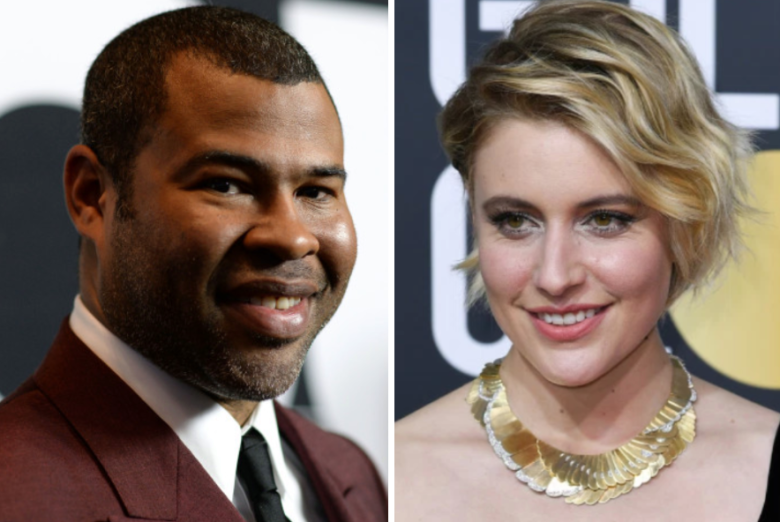 At least there’s one article that is processing this undeniably historic moment for the film industry in a more mannered and intelligent way. Just after the Oscar nominations announcement, the Atlantic released this article that comments on the racial and gender diversity, but devoted more attention to a less superficial reason why this Best Director list is so exciting. The article, titled “It’s the Year of the Auteur at the 2018 Oscars”, ends its first paragraph by claiming “this is the first time in 90 years that all five Best Director nominees also wrote their movies.” This seems to be a far more interesting statistic than the ones in the previous articles about skin color and so on, but this article illuminates the idea that black and female filmmakers are not just being recognized by the Academy, but they are done so for films that are very much of their own personal experience that they have devised as auteurs.

But well-reasoned and uniquely elaborated articles like these are a dime a dozen (whatever that saying even means). It’s clear that there is a bullish ideologue rampant through these publications that simply suggest ‘diversity (of the two genders and two races), regardless of quality, is a progressive direction for all of humanity’, which it seems is going to put a stone in the shoe of any fans of meritocracy. This lengthy and reiterative discussion only goes to undermine the causes it’s reaching out to achieve. Where there’s room to discuss the qualities of these filmmakers and why it is they should be praised and maybe even how their race and gender play a part in this, we get instead an endless barrage of articles claiming a few black people and women getting a chance to win a shiny trophy is a step in the right direction for “diversity” – forget about Latinos or foreign films, what the wonderful world of the film press asked for in this awards season is what they got.

Before We Vanish [2018]: An Alien Invasion Film Exploring the Reason for Human Existence