Why did Walter White become a drug dealer? The sincere, incorruptible man he was, was it solely cancer that made him the bad guy he ended up being? There are so many reasons one may find – his underappreciated genius in chemistry, the state of his neurologically impaired son Flynn whom he adores, the unplanned pregnancy when he is just a decade away from reaching his sixties and of course, finally obvious cancer. True, all these do add up to a significant extent but I think there is one more thing that tipped the balance completely in favor of him becoming the unscrupulous and unforgiving beast whose instincts for self-preservation burgeoned to the extent of even plotting the murder of his son-like Jesse Pinkman in AMC’s ‘Breaking Bad’ – his perennially troubled relationship with wife Skyler White.

In the first season of Breaking Bad, you see Walt in a complete ‘loser’ avatar with a terribly damaged male ego that finds expression in his inability to conjure an erection when Skyler tries to give him a hand-job. A few episodes later, Walt is disgusted when he finds that even his son Flynn does not respect him and does not want to be called Walter Jr. anymore. It is evident that it is none but Skyler who rules the family, which by itself is not bad per se, but it is White who is unable to stomach that hegemony anymore.

Walter suffers from the typical capitalist era’s affliction of what may be called the ‘male inferiority complex’ whose crucial symptom could be an agonizing wistfulness to live up to one’s own perception of over-blown masculinity.  A large number of men suffer from this kind of inferiority in today’s society due to radical differences between the values followed at the workplace and those observed within a family. A well-developed capitalist system gives equal primacy to both the sexes since there is no male or female-specific trade out there, as a result of which scope for unilateral exploitation of one sex by the other gets totally eliminated. But the system of the family at home which has its roots in feudal-era ideas (even in Western countries) has not generally kept pace with the changes happening in the economy. 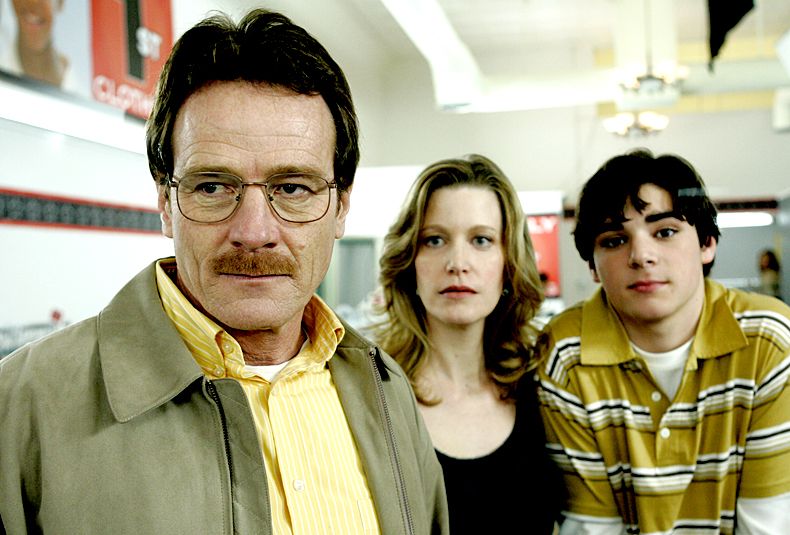 The concept of male superiority is a given in most families that has remained traditionally uncontested by the exploited female sex at the crucial altar of family unity and harmony. Even in a moderately-developed capitalist system, the contribution of the male to the family in economic terms could in no way be substantially lesser than that of the other gender. This is one scenario that was virtually absent in the days of yore and it requires a lot of mental adjustments on the part of today’s male to come to terms with it. The ability of the male to contribute and support the family financially has, for centuries together remained the cornerstone of unilateral superiority of the male gender within a family. But in today’s changed circumstances under capitalism, when a financially-empowered female on a rare occasion tries to assert herself with or without a view to sidelining the traditionally hegemonic male, the ego of the latter suffers a terrible blow.

This evokes different, unforeseen responses from the male some of which might even border on lines of tyranny in a desperate attempt to restore his position of supremacy in the family. The nature of the response could be sometimes shocking and even atypical of the male in question. He might under certain circumstances, try to assert his position through desperate, sometimes meaningless ‘pop-culture’ dictated histrionics like indulging in dangerous or life-threatening acts especially when the rebellious female is showing no signs of letting up. This is precisely how the ‘emasculated’ Walter White behaves as the episodes progress. Even if he is respected and loved by his wife for all his good qualities, White keeps demanding more from her. He expects some kind of an abject surrender from her and uses his skills in chemistry and human manipulation to achieve it. As if to prove my contention, he even admits in the last episode ‘Felina’ that he was in the drug business mainly because it was the only place where he felt ‘alive’ which is, as one may remember, completely contradictory to the excuse he had been giving all these days.

That feeling of being ‘alive’ alludes not only to his love for chemistry and the recognition he was getting in the drug industry but also to an incurable lust for domination and machismo suffered by his deeply bruised male-ego in the eyes of Skyler. When he delivers the iconic ‘I am the one who knocks’ line, it only appeared too anachronistic to me since in no sequence I could see something close to a heroic Walt who had the guts to sashay into the territories of his enemies without giving a damn about his life, as to adequately support his ‘I am the danger’ theory. In almost every crucial scene where he eliminates his enemies, he employs only subterfuge and wily manipulation never giving us the impression of being a supposedly bold and an overweening drug-lord. He gets assaulted by Michael Ehrmentraut physically without bothering to retaliate, breaks down in front of his brother-in-law Hank when he assails him with incriminating suspicions and virtually begs in front of the neo-Nazi brothers when they close in on eliminating Hank. 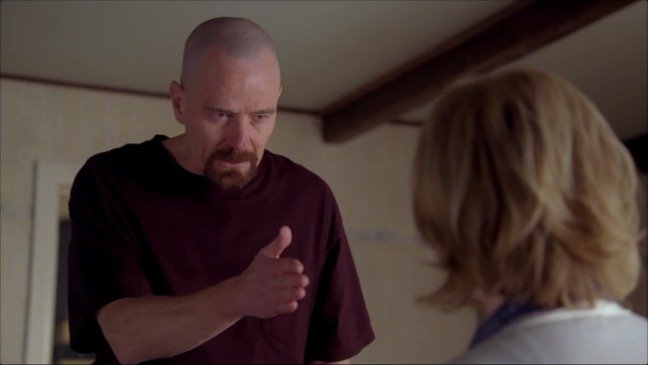 As we see, all that White needs from Skyler is calm and undying devotion which he sometimes tries to evoke dubiously by attributing all his sinister activities to the cause of his ‘family’. He brings barrels of money for Skyler to launder and in the last few episodes, an authoritarian Walter White is often shown to assume needlessly threatening stances whenever she begs to know the intentions behind his dangerous actions. To put it differently, all the recognition that Walt derives from his work in the drug business is used by him primarily towards creating a virtual aura of machismo and overblown virility around himself only to be employed against an often, helpless and mentally tormented Skyler.

Walt’s addiction to money-making has a Skyler angle which is manifest in his frustration over her illicit affair with her rich boss, Ted Beneke. In the episodes where Walt tries to build bridges with Skyler when she, on the other hand, is virtually running away from him using legal options, we see a parallel thread of Gustavo Fring trying to lure Walt back into cooking for him. Walt keeps staying away from the temptation on account of his guilt over Jane’s death and other deadly damages that he was indirectly responsible for. But only after he gets the killer blow – the revelation that his wife had slept with her boss does he decide to return to the meth business.

Even if there could be a million personal reasons for Walter to break bad on a lot of occasions, he simply, in my opinion, couldn’t have done so without the often-unnoticed but deeply powerful influence of the stronger sex among the two – Skyler White.