Home»Articles»Churuli (2021): A Transversal of Understanding Through the Debauchery of Language
Articles/Essays

Churuli (2021): A Transversal of Understanding Through the Debauchery of Language – Films like Inception (2010), Predestination (2014), Annihilation (2018) are examples of contemporary sci-fi productions that have forced audiences to construct extended narratives additional to that projected on the screen. Oftentimes, repeated viewings of these films have been necessary to have a sense of the auteur’s vision. Other recent films such as Hereditary (2018) and Midsommar (2019) have worked on the idea of folk horror to create an ethos of disturbance and uneasiness that characterizes the horror it associates itself with.

While experimenting with science-fiction through the agencies of extraterrestrial beings is in no way new to Indian cinema, Lijo Jose Pellissery’s Churuli (2021) is unique in how it combines elements of the aforementioned genre while simultaneously arousing mystery through folk horror in telling the experience of its characters in the mysterious jungle of Churuli. These elements have distanced the production from the grounded, realistic cinema that the Malayalam Film Industry is popular for and has weaponized this surrealist, almost absurdist, expression to comment on themes of masculinity and the bestiality of man that otherwise would be less impactful. The titular translation, Spiral, embodies both the central identity of the film as well as the experience of the audience: you are left in a daze with your thoughts at the end of the film, and as you attempt to construct an idea of what you’ve experienced, you find yourself in a loop, eerier, uncomfortable and exhausted.

When accolades and applause were showered for Jallikattu (2019), complementing its visual spectacle and cinematic storytelling, along with it came nuanced criticisms for the final shot of the film. The shot served the purpose of an epilogue but was, according to many, spoon-feeding Pellissery’s idiosyncratic vision of what the film represented. This took away from the active participation of the audience in deciphering the film. However, Churuli (2021) is anything but merely a visual spectacle as it hinges almost entirely on connotation rather than denotation. With the amount of foreshadowing, use of Chekhov’s Gun, and various other MacGuffins peppered from the beginning of the film, it is demanded from one to pay close attention to the development of the action to understand what the story truly is about. Audiences will struggle nonetheless with the film’s absurd expressionism. Completely juxtaposing what was experienced in Jallikattu, there is no spoon-feeding. Audiences are forced to construct an extension of the narrative presented in the film, both preceding it as well as succeeding in a fervorous attempt to understand it. 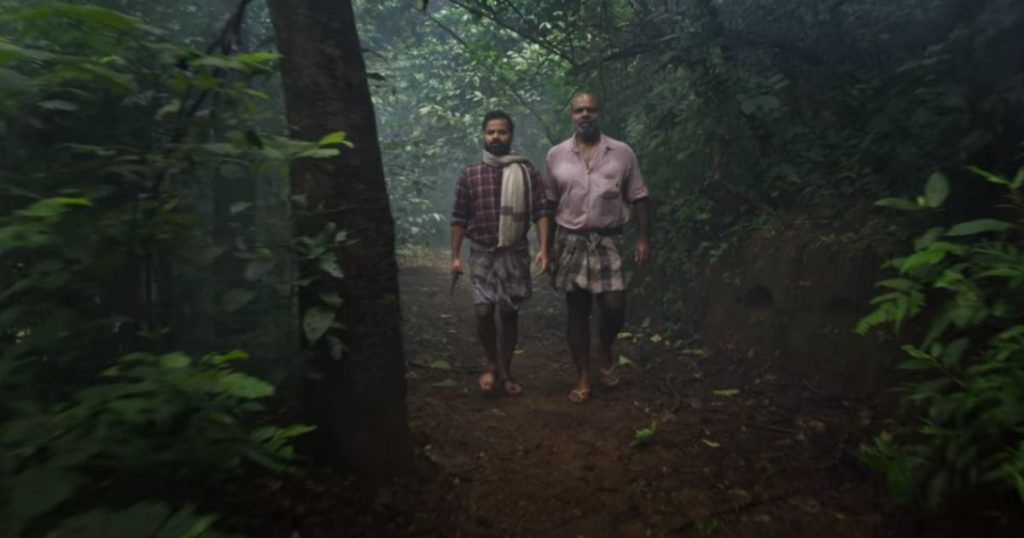 The film seems to be, in a way, a commentary on man’s delusional belief that his visual perception of content grants him the divine right to understand it. In this sense, audiences are similar to Shaajivan and Antony. They believe they are truly invisible in carrying out their duties as undercover police officers amidst the corrupt residents of Churuli. However, in truth, they are the ones under surveillance. The opening title before the unveiling of the production banner reads, quoting Kalpatta Narayanan’s famous poem Samayaprabhu;

In the darkness
a mouseling
is pointed towards
a cat and taught.
Enormous eyes,
could spot you any second.
Sharp ears,
can track you
by the sound of hair fall.”

The director foreshadows both Shaajivana and Antony’s plight as the mouseling in the darkness that believed itself to be hidden from plain sight yet observant of the other. In truth, the mouseling is always in the gaze of the cat; the residents of Churuli. The audience of Churuli is also similar to the mouseling in their primary viewing of the film; they believe that they observe and understand the medium that Pellissery has presented yet, ultimately fall victim to the labyrinth of confusion he has subjected them to.

Related to Churuli (2021): Uncontrolled Chaos and Herd Mentality in the films of Lijo Jose Pellissery

Even as following the story seems exhaustive, Pellissery is able to keep his audiences engaged with bright, detailed artwork subject to both the semiotic experience and hermeneutic interpolations. The cinematography by Madhu Neelakandan transports his audience to the lawless jungle of Churuli, which creates a sense of dread in existing with nature rather than embracing it. The eerie yet innovative sound design by Sreerag Saji is unique from any production in Indian cinema and, rather than existing to complement the visuals, plays a detrimental role in adding meaning to the narrative.

The editing by Deepu Joseph is more inclined in creating an aesthetic necessary for disorienting audiences with its sudden jump cuts and irregular pacing rather than being focused on producing the visual spectacle that Pellissery productions are known for. One can easily understand that much work went into post-production with its visuals and sound design, given that the film was shot in 19 days. With so much time spent in post-production, contrary to how Malayalam Cinema tends to rely on what is shot and edit them sequentially to produce a film, Churuli (2021) seems to have attempted to gain its identity on the cutting floor with its visual layers through coloring and effects as well as sound design as opposed to merely relying on the kino eye. There seems to be a bending of reality in this as the film captured by the kino is manipulated vigorously. This bending of reality acts metaphorically as the predominant identity of the film. 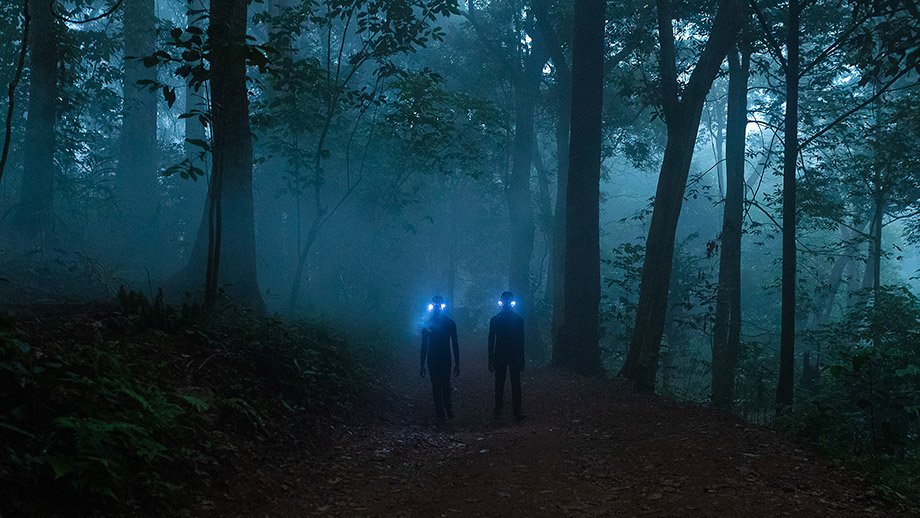 However, what has generated more attention for the film besides its experimental approach to filmmaking and storytelling is the reception of the final product. The general response to the production has been split in multiple ways. The section of people who wish to experience cinema as a passive escapist form of media is presented with very surreal content yet is unable to ultimately have the passive experience because of how much hermeneutic involvement the film demands in understanding it. Another section, the ones with the critical hat on, attempt vigorously in trying to understand what they’ve watched but are ultimately subjugated to what Pellissery wanted them to be; confused. Nonetheless, the open-ended interpretation that the film allows has led to countless narratives stemming from individual minds, all seeming possible from one perspective while also seeming utterly nonsensical from another. Understanding art in the realist realm we believe ourselves to be a part of is hard enough. When the supernatural is added, a quandary of “anything is possible” permeates and prevents a complete understanding of the medium.

The third response to this ambitious motion picture is what has pushed it into mainstream focus for all the wrong reasons. This section retains a space characterized by its complaints about the film’s excessive use of vulgar language, subsequent damage to the existence of a “civilized culture”, and how the production is not accessible to the common masses that Malayalam Cinema typically caters to, i.e., families. In an industry where audiences have normalized witnessing misogyny, violence, and instability of social values in a medium when the community stigmatizes the language of that very same medium that is pedestaled for its limitless creativity, it is the absurdity of the film that has transversed the silver screen and embedded itself into ordinary everyday existence.

This ludicrous rebellion against profanity in cinema has been popularised to the extent that it has become the topic of debates in news channels, setting itself amidst a wider discourse that questions what truly is the extent of creative expressionism. Perhaps it is the delve of the beholder’s gaze into the unfamiliar and unknown through interaction with vulgar language previously scorned at and characterized as “uncivilized” that has called for this uprising. Nevertheless, one should also consider that perhaps it was the auteur’s inherent decision, outside the plot necessity, to use such language to show audiences what lies within their own unknown. For the same, a surrealistic medium had to be deployed to show the facade of civilized society man believes he is a part of, a theme predominant in Pellissery productions.

Churuli (2021) lacks focus at certain places and at times seems to be at odds with whether it wishes to be ambiguous or convey a bit more to its audience. Nonetheless, it is counter-productive that a film with such ambition, creative expression, and monumental courage in the experimental cinema concerning Malayalam Cinema discourse is marginalized to a debate on the rights of the auteur and creative control. Pellissery has claimed Churuli to be the end of his trilogy on Life, Death, and Afterlife after EE.MA.YAU (2018) and Jallikattu. Consequently, Churuli (2021) represents a world of chaos and savagery where language plays a crucial part. Language facilitates the ability to communicate ideas and is the basis by which civilizations are structured. To weaponize that very medium in creating an atmosphere of foul language and, thereby, constant negativity adds to both the absurdity of the setting and, realistically, a denotation to purgatory rather than the afterlife.

For Lucio [2022] MUBI Review: Lucio Dalle's artistic (and personal) life becomes the focus of this confident documentary by Pietro Marcello

5 Shows like All Of Us Are Dead on Netflix