“Just because a film is dealing with a very serious and important topic doesn’t in any way inflate the film’s quality – therefore, Chi-Raq is a fumbled mess, one of Lee’s worst films, despite the good intentions.” 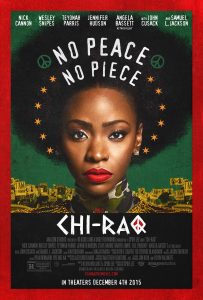 There are always good intentions behind every Spike Lee joint, especially in films like Chi-Raq where he’s trying desperately to put forward an important yet under-discussed issue in cinema form. But the disparity between good intentions and awful execution is felt strongly here, making unfortunate viewers wonder how Lee and his team could make such a bafflingly bad film about such an important topic.

The topic of such is gang violence, specifically in Chicago, and specifically occurring between black men, putting themselves in danger, prison, or the grave. After the death of an innocent young girl, hit by a stray bullet, the women of Chicago decide to go on sex strike until the men cease their gang warfare: no peace, no pussy.

It’s a blunt message for the film (though one that has existed even recently in a number of societies, with mixed results), but it could’ve still worked if the film had dug (or even had scratched) into the nuances of the genders. Instead, here is a film that wants to be taken seriously, even if it hardly takes itself seriously.

Where to even begin? Well, before looking at the film’s immense issues at its beginning (swinging and missing, right off the bat), it’s the aesthetic that quickly reveals itself to be rather inconsistent with the theme. Lee identifies the humor in the sex strike and manages to keep it tonally level with the tragedy of the gang warfare, but as I said previously, Lee has not much sense of comedy, and this misguided humor reduces not only the film’s enjoyment but also the depth of its portrayals of gang culture and gender relations.

The dichotomy of the genders is rendered basic on the big screen: men are super horny, meaning they’re more easily manipulated by women, and women are clever, conniving, and sassy in their tactics. This leads the sex-strike to the local military armory, where the women use these tactics to sexily take over the facility, again with very little laughs to be had. It’s all a far-cry away from when Lee was writing multifaceted characters in films like Do the Right Thing or Jungle Fever, or even his next film BlacKkKlansman, so it’s apparent he’s hopefully gotten these infantile characterizations out of his system.

The playfulness only goes to irritate and obscure the film’s good intentions, with an on-screen narrator (Samuel L. Jackson) explaining up-front that this is indeed an adaptation of the ancient Greek play ‘Lysistrata’, with even many of the characters’ names unchanged. Jackson’s got the charisma for this Dolemedes role, but in an attempt to sound more authentically old-fashioned, the rhyme scheme screenwriters Lee and Kevin Willmott employ are just grating at the ears. It’s even worse when actual diegetic characters start talking like this, making the dialogue in this first-draft-esque screenplay sound completely inconsistent.

Aside from the urgent topic, there’s not much praise that can be given to such an awkward and inarticulate film whose aesthetics hinder the message rather than accentuate it. Some of the players like Angela Bassett’s grieving mother and, oddly enough, John Cusack’s raspy and spiritually exhausted, yet defiant priest give this film some of the direct seriousness it deserves.

But the problems this film has been evident even right from the very beginning. Lee is known to open a film with a flourishing bang – the dance sequence set to Public Enemy’s ‘Fight The Power’ in Do the Right Thing, the joyful stroll through streets and street signs in Jungle Fever, the harrowing footage of gun-downed young black men in Clockers, and even the one-man interpretive dancer that kicks off the otherwise mediocre Da Sweet Blood of Jesus. But Chi-Raq begins in a conversely uninspired way – a basic rap anthem, singing about not killing people and whatnot, with the lyrics merely popping up on the screen. A YouTuber could’ve provided a more technically interesting and artistically intriguing opener.

Then, the film compares the number of deaths of US troops in Iraq and Afghanistan to the number of all murders in Chicago, or Chi-Raq, trying to illustrate the warfare occurring within the country itself. The problem, among many, in this false equivalency, is that the film is only comparing AMERICAN deaths abroad to the total murder rate in Chicago’s war-zone – if you include the many more deaths of the defendants in the Middle East conflicts, the number of warfare deaths in Chicago dwindles in comparison, though it would at least still seem alarming, but the film knackers this statistic through over-reaching.

As Spike Lee is seemingly obsessed with his own films, he has a habit of referencing them himself. Here, the film ends with the message “wake up”, the same final line yelled out in School Daze, making this seem more like an in-joke self-reference than an actual rallying cry against murderous gang culture. It’s the little details, but also the bigger picture, that suffocates this film and its important message. At its finale, Dolemedes advises that Chicago must be brought back from Chi-Raq, though the film has a very little clue or inspiration on how to enact this. Just because a film is dealing with a very serious and important topic doesn’t in any way inflate the film’s quality – therefore, Chi-Raq is a fumbled mess, one of Lee’s worst films, despite the good intentions.